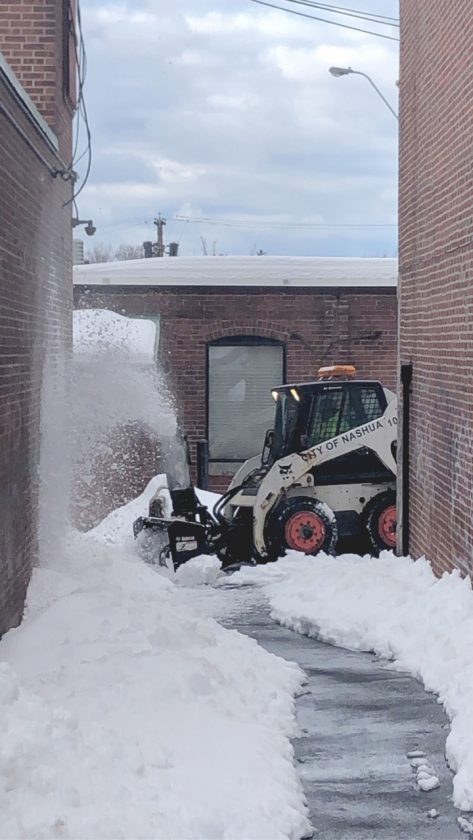 Telegraph photo by ADAM URQUHART Nashua Division of Public Works employees clear a path in a downtown alley Thursday afternoon, continuing the cleanup efforts days after the first significant snowfall of the season.

NASHUA – The first significant snowstorm of the season definitely packed a punch in southern New Hampshire, dumping 20 inches of snow for the entire days-long storm.

The snow began to fall Sunday afternoon, and did not wrap up until Tuesday afternoon, meaning crews were out on the roads for hours in an effort to clear roads. However, Nashua Division of Public Works spokeswoman Lauren Byers said this was an unusual storm because of its duration, making it more difficult to tackle than the average New England storm.

“We prefer to clear curb to curb, right to the side of the road on each side, but in this case, we just didn’t have the time because we had to keep going out to the main roads,” Byers said.

Crews started coming in Sunday afternoon to get the equipment ready and the snow just kept coming down, accumulating quickly across city streets. Byers said during this storm, officials kept having to divert plows from the side streets to attend to the main roads, which slowed down the pace in which they were able to clean the side streets.

Although crews did their best to create paths to make it easier for residents to get in and out of their neighborhoods, Byers said she believes this caused some frustration for residents who are normally used to them immediately cleared curb to curb.

“We did the best we could, but our guys also need to take breaks to eat, get a little bit of rest and get back out on the road,” Byers said.

As it is, those out on the roads for hours have 1,400 streets, or 303 miles of roadway to plow, not to mention clearing multiple lanes on some of those roadways. Additionally, DPW has 41 plow routes, more than 80 pieces of equipment and also hires contractors to assist with the cleanup efforts. She said employees from the Solid Waste Department, Parks and Recreation Department and others also pitched in to help plow.

“In this storm, anybody we could put in a plow went in a plow,” Byers said.

Aside from the roadways, city officials also are responsible for cleaning 50 miles of sidewalks. On Thursday, more sidewalks were cleared, and crews were also out scraping, cleaning areas of the city and pushing snow back out of the way. During the storm, about 80 employees worked.

This storm also led city officials to implement snow emergencies, meaning all vehicles had to be off the streets. However, not every vehicle owner abided by that, as Byers said approximately 15 vehicles were towed each night of the storm. This is still significantly fewer than in past years when as many as 80 vehicles were towed.

Byers said DPW officials are grateful for those who were patient during their cleanup efforts.