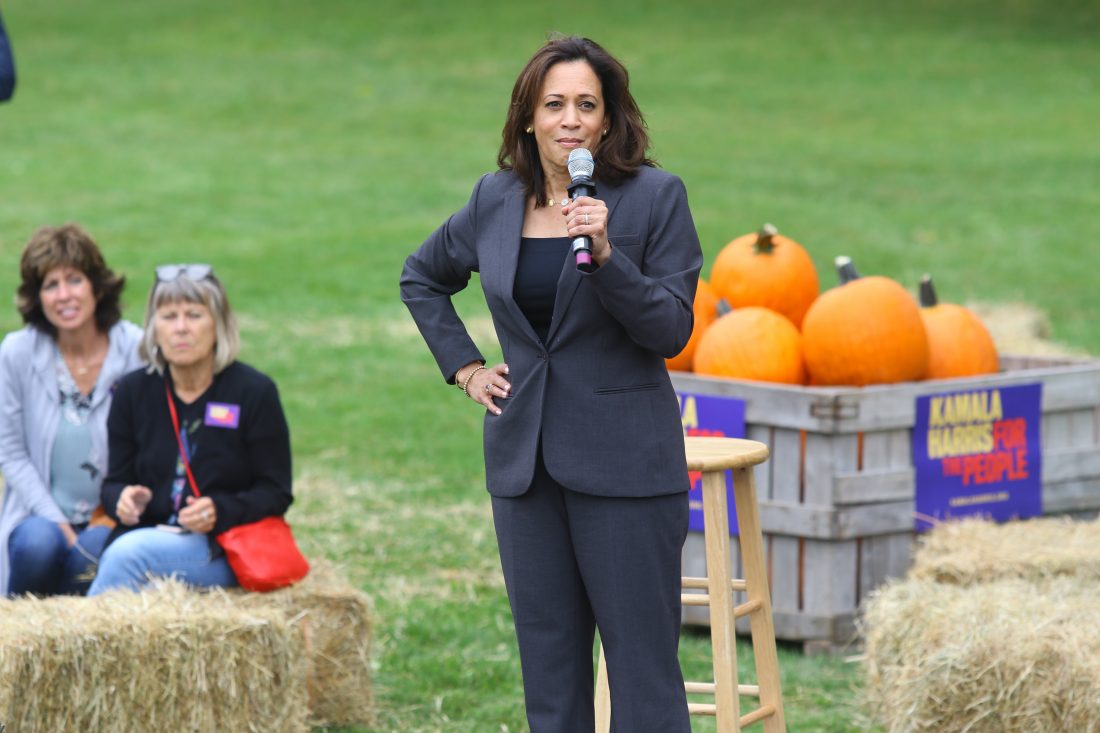 NASHUA – “I think Joe Biden would be a great running mate. As vice president, he’s proven that he knows how to do the job.”

After her May 15 presidential campaign stop at Nashua’s Girls Inc., California’s Kamala Harris gave this response when asked about the possibility of her serving as Biden’s running mate. Her point, at the time, was that she intended to be the 2020 Democratic presidential nominee, rather than merely someone else’s running mate.

Both Steyer and Bloomberg are multibillionaires who are known to donate heavily in support of liberal causes, particularly environmental protection and gun control. If not for running their own campaigns, they may very well be donating to Harris.

“I’m not a billionaire. I can’t fund my own campaign. And as the campaign has gone on, it’s become harder and harder to raise the money we need to compete,” Harris said in a message to those who had supported her campaign.

“So, to you my supporters, it is with deep regret – but also with deep gratitude – that I am suspending my campaign today,” Harris added.

Upon confirming her long-anticipated presidential campaign in January, Harris seemed to have the right demographic factors to be a strong contender to represent the Democratic party of today:

After her announcement, Harris remained close to the front of the pack of Democratic contenders. Then, during the June debate, she directly challenged Biden on his record on the issue of school busing.

At that point, Harris skyrocketed in the polls. On July 9, Chicago-based Real Clear Politics showed the national polling averages for candidates as:

However, Harris stumbled badly during the July debate. This included her failure to respond to Tulsi Gabbard’s strong critique of her tenure as attorney general in California.

Harris then began a steady slide in the polls that saw her fall from second place nationally to out of the top tier. Not even five months later, the Real Clear Politics polling averages for the same five candidates are:

While ending her candidacy, Harris emphasized her belief that an African-American woman will eventually become president.

“And our campaign uniquely spoke to the experiences of black women and people of color — and their importance to the success and future of this party. Our campaign demanded no one should be taken for granted by any political party,” Harris said on Tuesday. “We will keep up that fight because no one should be made to fight alone.”

Harris also vowed to do everything in her power to ensure that President Donald Trump loses next year – if he is not forced to leave office before then as the impeachment process continues.

Trump could not resist taking a Twitter shot at Harris upon her exit from the race. He tweeted: “Too bad. We will miss you Kamala!”

As for her former competitors, most praised Harris for her work as a senator and on the presidential campaign trail.

“Kamala Harris is an incredible talent with unlimited potential. Her career has been defined by taking on those who abuse power and seeking equity and justice for all people. Her intellect and insight will continue to be needed by the Democratic Party and the country,” Biden stated via Twitter.

“Thank you @KamalaHarris for running a spirited and issue-oriented campaign. I look forward to working with you to defeat the most dangerous president in history and ending the hatred and divisiveness that he has created,” Sanders tweeted.

Warren tweeted: “We’re all deeply grateful for @KamalaHarris’s leadership on issues from protecting our democracy and advocating for our teachers to ending the black maternal mortality crisis–and I know my friend will continue fighting for justice.”

“@KamalaHarris has spent her career advocating for the voiceless and the vulnerable. I am grateful for her leadership and the courage she brings to the Senate and the national debate. I know she will continue to fight fearlessly on behalf of the American people–and our democracy.” Buttigieg tweeted.

Minnesota’s Amy Klobuchar added: “Kamala is a good friend and incredibly strong public servant. Sometimes campaigns can tear friendships apart but we have grown closer. Her good work will continue.”