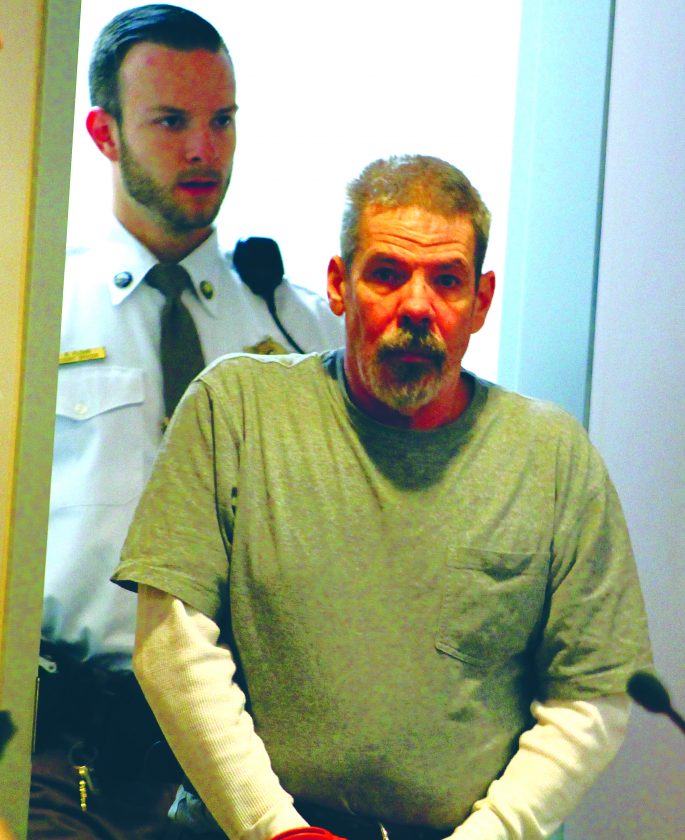 Telegraph photo by DEAN SHALHOUP A court officer escorts Merrimack resident Mark Uhlman into Superior Court Wednesday for his plea and sentencing hearing on charges stemming from the June standoff in Merrimack.

NASHUA – The Mark Uhlman who appeared in Superior Court Wednesday for a lengthy plea and sentencing hearing is, his attorney and several family members said, not the same Mark Uhlman who threatened to shoot people and engaged police in an hours-long standoff back in June.

“Mark is a good person … a good citizen who made a mistake,” Uhlman’s brother told the court.

“He’s an amazing human with a heart of gold,” a niece said.

“What happened that day is so out of character for my dad,” Uhlman’s son said. “This is the dad I’ve always known,” he added, gesturing toward the defense table, where an emotional Mark Uhlman sat with his attorney, Charles Keefe.

It was Uhlman’s heavy drinking, his family and Keefe said, that was the impetus for what began as a verbal dispute with his brother, escalated when Uhlman pointed a firearm at him, then grew into an hours-long police standoff during which Uhlman threatened to come out of his Baboosic Lake Road residence “with guns blazing.”

Uhlman, 54, a nearly lifelong Merrimack resident and career contractor and engineer, pleaded guilty Wednesday to two of the eight charges initially filed against him, the result of a plea deal in which Uhlman agreed to serve two concurrent terms of two to four years, with one year of the minimum suspended if he successfully completes a substance-abuse treatment program either at the prison or as part of an outside program.

According to the agreement, Uhlman entered guilty pleas to one count each of reckless conduct, a Class B felony, and criminal threatening – deadly weapon, an extended-term felony.

As for the agreement, it also gives Uhlman credit for the 161 days he’s served in jail since his arrest. If he successfully completes a treatment program and is granted the one-year suspension of his minimum sentence, Uhlman will have just under seven months remaining to be served on the minimum sentence.

Once released, according to the agreement, he will be on parole until he reaches the four-year maximum.

He is also ordered to pay restitution to the Merrimack and Nashua SWAT teams, in an amount that has yet to be determined. Judge Jacalyn Colburn, who presided Wednesday, said a restitution hearing will be scheduled for the near future.

Colburn decided the final terms of Uhlman’s sentence under the so-called capped plea arrangement, in which the prosecutor and defense attorney each make sentencing recommendations, then leave it up to the judge to make the final decision.

The prosecution, represented Wednesday by assistant county attorneys Kent Smith and Michael Miller, had asked for two straight prison sentences of two to four years, to be served concurrently, with the 161 days of credit and orders for substance abuse screening and treatment.

Keefe recommended one nine-month jail sentence, stand committed, on one of the charges, and a prison term of two and a half to five years, all suspended.

In her sentencing remarks, Colburn, began by thanking Uhlman “for taking responsibility for what you did.” She also said she “wishes, as your family does, that you had sought help for your disease” earlier, referring to his alcohol consumption.

“What you did was bad, but that doesn’t make you a bad person,” Colburn added. “Clearly, what you did was very dangerous, and you deserve a State Prison sentence.”

Uhlman, according to statements and court documents, had been drinking all day on June 26, and by the time police were called to the Baboosic Lake Road home he shares with his brother, everyone present at the time had vacated the building.

Merrimack Police Capt. Matthew Tarleton, who was called to testify during the hearing, said police learned upon their arrival that Uhlman was inside the house and probably armed.

Officers told neighbors to “shelter in place,” meaning go into their basements, Tarleton said. Police negotiators at first made contact with Uhlman by phone, but the negotiations eventually “broke down” and Uhlman stopped answering the phone, he said.

Merrimack police soon called the Nashua SWAT team for assistance, as the standoff wore on into the night.

At some point, SWAT members posted at the rear of the residence reported a man climbing out of a window with an AR-15 rifle, Tarleton said.

When they ordered the man, later identifed as Uhlman, to put the firearm on the ground, he complied, but refused orders to step away from it, Tarleton recalled.

The SWAT members were able to subdue Uhlman and take him into custody, he added.

On Wednesday, Keefe said his client “is ashamed of what he did” and “is very thankful nobody was hurt … he is also thankful that his family has forgiven him, and is supporting him,” Keefe said.

Uhlman’s brother choked back tears as he addressed the court.

“I know my brother made a mistake … but none of this would have happened if alcohol wasn’t involved,” he said. “That’s not an excuse, but if he wasn’t drinking, the guns never would have come out.”