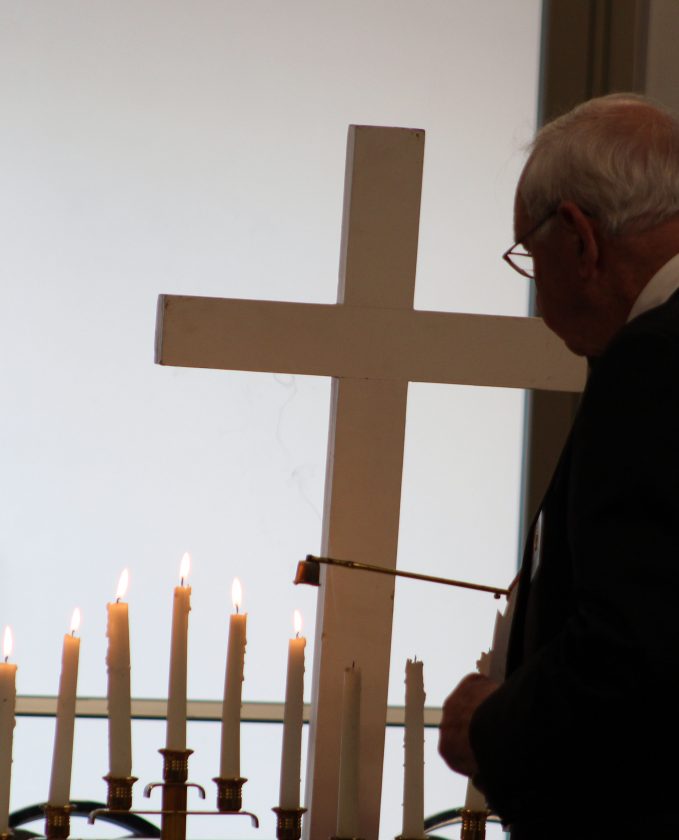 Telegraph photo by DEAN SHALHOUP Nashua Elks Esquire Normand Lavallee conducts the ritual of extinguishing a candle for each of the 13 members who died in 2019 during the lodge's observance of Elks Memorial Sunday.

NASHUA – With the timeless phrase “our fellow members are never forgotten” on their lips, about 75 Nashua Lodge of Elks members and guests paid tribute Sunday to the club’s 13 members who died in 2019.

The observance of Elks Memorial Sunday takes place at lodges across the country on the first Sunday of December. Among the observers are the men and women of Nashua Elks Lodge 720, who have convened each year for nearly as long as the more than 100-year-old lodge has been around.

“Today is one of those events that’s bittersweet to be a part of,” Elks Chaplain Cheryl McDonough, the speaker of the day, told the Elks and their guests.

“After all, a memorial service, by definition, is an event established to remember those who are no longer part of our lives,” she said.

But with fond memories, along with a blend of faith and love, McDonough added, there comes comfort.

Also part of the service was the sounding of 11 chimes on the lodge’s ceremonial clock, a tradition that signifies the solemn “hour of recollection.”

Earlier in the service was another Memorial Sunday tradition, “The Roll Call of the Absent,” which each year pays tribute to members who died over the past year.

As Dorgan Cote, read off each of the 13 names, Esquire Normand Lavallee extinguished one of the candles arranged on the altar.

The final – and largest – candle to be extinguished was in memory of departed veterans.

To cap the service, attendees were invited to stand and take part in the singing of “Auld Lang Syne.”

Following are the names and dates of initiation into the Elks of the 13 “absent” Elks whose memories were honored Sunday.

Dean Shalhoup may be reached at 594-1256 or dshalhoup@nashuatelegraph.com