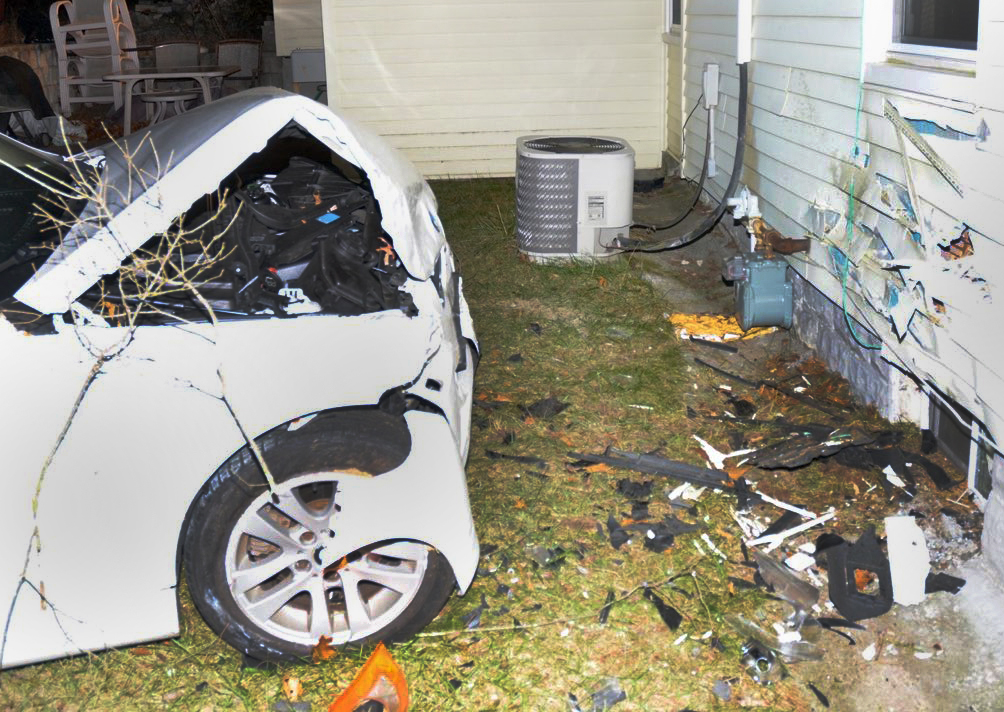 Photo by HUDSON POLICE Debris covers the scene of the weekend crash in which the heavily damaged car at left, driven by Litchfield resident Gabrieyl Figliolo, 23, struck a house at 104 Lowell Road. Figliolo was charged with drunk driving, police said.

HUDSON – Police over the holiday weekend charged a 23-year-old Litchfield woman with driving while intoxicated, after the car she was driving left Lowell Road and crashed into a house.

Police said Gabrieyl Figliolo was booked on the charge, then released on personal recognizance bail pending arraignment, which is scheduled for Jan. 3 in Nashua district court.

Police said officers responded to 104 Lowell Road at about 9 p.m. Friday, after the department received reports that a car had struck a house at that location.

Upon arrival, officers found a 2007 BMW with heavy front-end damage sitting on the property several feet from the house.

An on-scene investigation determined that the driver, later identified as Figliolo, was traveling south on Lowell Road when, for reasons that remain under investigation, her car left the road and then hit the house.

The residence is just south of the intersection of Lowell and County roads and opposite Atwood Avenue.

Police said after further investigation they took Figliolo into custody on the DWI charge. While her car sustained significant damage and the airbags deployed, Figliolo, who was apparently alone in the car, wasn’t injured, police added.

There were people in the home at the time, police said, but none of the home’s occupants were injured.

Firefighters conducted an inspection of the dwelling and found signs of structural damage, police said, but the occupants weren’t required to vacate the home.