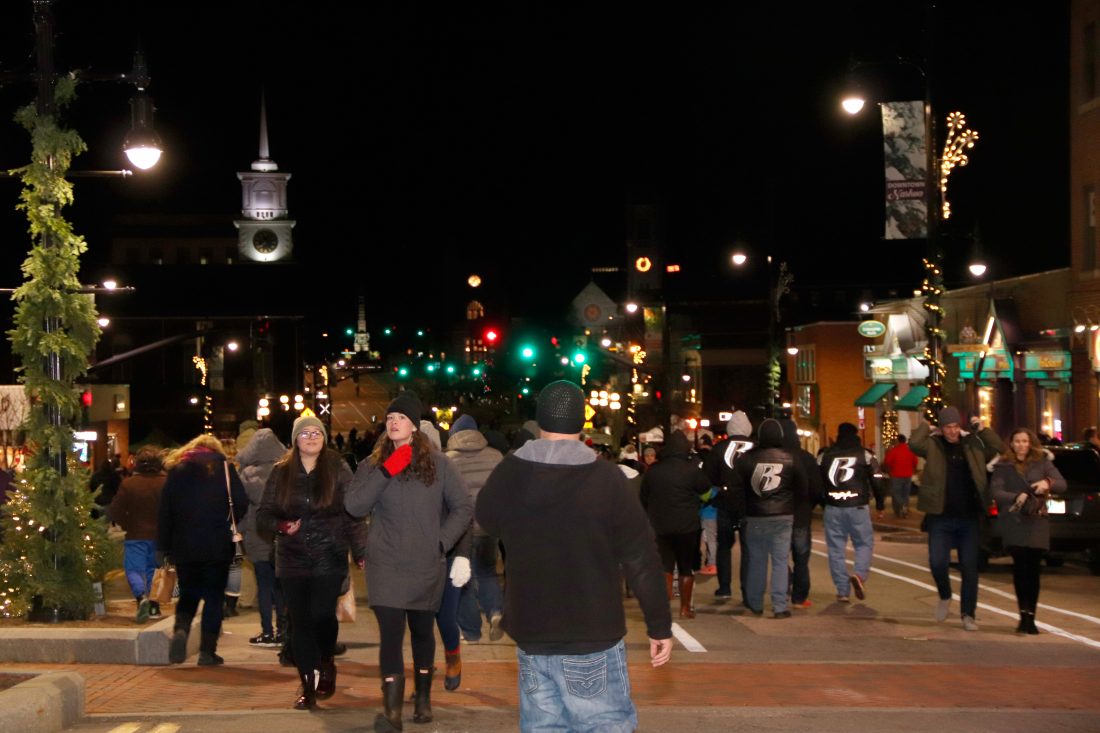 Historically, more than 35,000 people brave the November weather (it was 27 degrees this year), to enjoy an assortment of activities, from shopping and dining, to enjoying to live music.

Nashua Mayor Jim Donchess kicked off the festivities on the steps of City Hall.

“Tonight, as we celebrate Hanukkah, Christmas and also, Diwali, we have the consul general from India, Sandeep Chakravorty,” he said. “We are so happy to have him here in Nashua for the first time.”

Chakravorty thanked the crowd, saying, “I think it’s an amazing occasion today and so wonderful to see you all here in the freezing cold, but very high in spirit. Let’s start a new tradition of lighting the lamp of Diwali, which is a very old Indian festival, which signifies the victory of good over evil, and the importance of light conquering darkness.”

One of the more unusual attractions at this year’s stroll was a handmade vehicle called, “the Fruit Roll-Up,” which looked like something out of Willy Wonka’s Chocolate Factory.

Mike Swatao, of MakeIt Labs, said the land and sea amphibious vehicle was made for the Lowell Kinetic Sculpture race.

“This was made from scratch in less than a month and a half,” he said. “The idea of this vehicle is that it can go down the road – it has to go through a mud pit in this Lowell race – and it also has to float down the Merrimack River for 200 yards. It’s a fun, creative race.”

There were also plenty of street vendors selling practical items (scarves and mittens) and the whimsical (glow sticks and light sabers).

The former Alec’s Shoe store location at 201 Main St. featured an indoor farmers’ market with food and wine, plus jewelry, clothing, art and other unique finds.

Across the street, at the United Methodist Church, there was an indoor craft fair and children’s activities.

“It’s a great night to walk around and see people you might not have seen in a while,” Nashua resident Jeff Richards said. “But, we’re hoping to get inside for a bit. It is cold out here.”

Tyler Whitman of New York City was in the area way visiting friends and decided to spend an extra day to catch the stroll.

“I love these types of New England holiday events,” he said. “Since I’ve been up here, I’ve done some Christmas shopping and a lot of eating. I think CodeX speakeasy is so East Village. The whole place is authentic. I loved it.”

Hunter Stamas performed with her eponymous band, Hunter, for the stroll. This was her group’s fifth appearance at the stroll. She said it’s always a challenge to sing in such cold weather.

“For once a year, and for a city like Nashua who has been so good to us, we handle it,” she said. “I don’t think we sound as good, but the crowd enjoyed it so that’s cool.”

Stamas added that her band regularly plays at many Nashua venues, including The Peddler’s Daughter, and even tours nationally.

“We have a lot of upcoming shows at Fody’s,” she said. “Plus, we also tour nationally and internationally. We’ve hit just about every state now. We really like going up to Canada. And believe it or not, Michigan has some great music venues.”