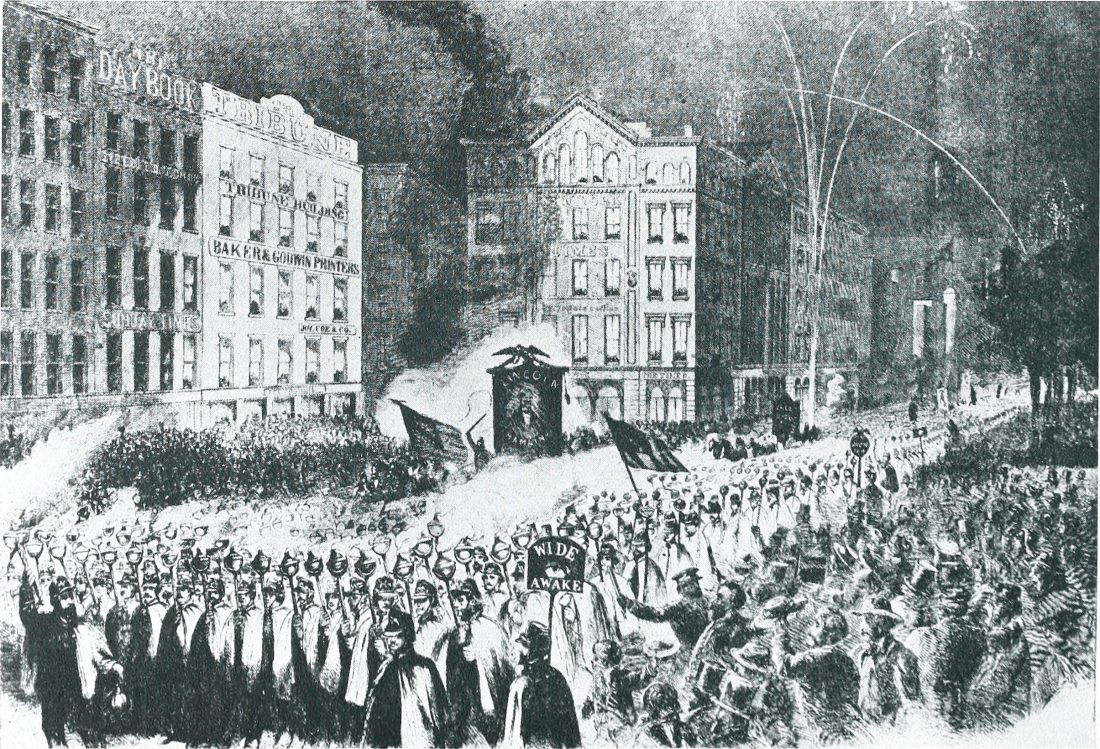 The Milford Historical society’s Charlotte “Charlie” Annand said she had no idea that when they started cleaning the Carey House attic in 2016, that this would be the first step of many on a very surprising, and fruitful journey.

“While cleaning, a carton was pulled from a space in the attic rafters,” she said recently during a special presentation at the Milford Town Hall. “Mark Genovisi discovered, under a collection of hats and wigs, a bundle of white fabric. As he unfolded it, a gigantic eye and the numbers and words, ‘1860 Wide Awakes,’ appeared.”

Annand said the symbolism and the find itself, remained a mystery that would last months and months. She added that sometimes, a question on one artifact might be answered while researching a different historical item.

She discovered an inventory list from 1979, that revealed that a man named George P. Holt of New Haven, Connecticut, had donated many items to the collection, and among the items, were a lantern and a “Wide Awakes” cape.

“The inventory list also contained the intriguing notation that Holt was one of the founders of the ‘Wide Awakes,'” Annand said.

Further research divulged that most Wide Awakes members wore black capes and black hats as part of their uniform. Annand and others didn’t immediately know why their cape was white.

“I read a paper about the Wide Awakes written in 2009 by Jon Grinspan,” she shared. “An email address was included in the text.”

Annand sent Grinspan an email, with little hope of receiving a reply. But she did hear from Grinspan, who explained that he was a curator at the Smithsonian Institute in Washington D.C., as part of their division dedicated to Political History at the Smithsonian’s National Museum of American History.

One of the resources that Grinspan recommended, was a 1985 account written by an original member of the Wide Awakes, who were formed in Hartford in 1860.

In May 2018, Grinspan paid a visit to the Milford Historical society, to look at the white cape. He was also shown the lantern, and he connected the dates written on the staff of the lantern to election years beginning in 1860 and to political campaigns for many years afterwards.

“He knew immediately that lantern was the type used by the Wide Awakes,” said Annand. “With this information, another piece of the puzzle fell into place. The lantern was the one listed on the 1979 inventory along with Holt’s other donations.”

By this time, Annand and company knew that Holt was born in Milford but had lived part of his life in New Haven.

Thinking that they might have hit a dead end, the Milford Historical society decided to offer the items to the Smithsonian – who gladly accepted.

Annand flash-forwarded to the fall of 2018, where another attic cleanup began. This time it was in the Carey House barn, where hundreds of cartons were stored in the attic.

“On the very first day of the process, in the last box of the day, Sarah Weyant-Bunn showed me a folder marked, ‘George P. Holt- Papers, Letters.’ My excitement was beyond description.”

Annand read the letters, some from Holt written to the society form 1911-1915. It was detailed that he wished to donate personal items, including calling cards and photographs.

This, Annand knew: in 1820, his father built a farmhouse on Amherst St. in Milford, on the site where St Patrick church is now.

He was wounded four times.

He was in prison once.

Holt had family in Milford, including a cousin with whom he kept in touch.

Next, there was a photo from 1914 of Holt wearing the cape and holding the lantern. Based on his letters, Holt had come to set up the Holt “rume” (he spelled things phonetically). At the time, the society was in the town hall and his “rume” was in the attic.

“Each discovery was shared with Jon Grinspan and he aptly dubbed Holt, “The Gift That Keeps on Giving.”

In his paper, titled, “Young Men for War: The Wide Awakes and Lincoln’s 1860 Presidential Campaign,” Grinspan wrote, “A band of ‘sleepy Gotham politicians’ gathered in a Manhattan tavern late one evening in 1860. It was a windy Thursday night, and the atmosphere inside the dimly lit establishment was subdued. The bosses ordered ale and settled into a lazy debate about the usual political topics. They cursed the Republican party, analyzed their presidential ticket, and worried about the possibility of secession, all while getting steadily drunker in the cozy tavern.”

Grinspan talked about this new political organization, that stumped for the Republican candidate, Abraham Lincoln. He talked about young men from “Bangor to San Francisco,” and from meccas to farmlands donned uniforms, lit torches, and marched through towns.

“They flooded every northern state and trickled into upper South cities like Baltimore, Wheeling, and St. Louis. Launched in March by ‘five young dry goods clerks’ in Hartford, Connecticut, by November the Wide Awakes had developed into a nationwide grassroots movement with hundreds of thousands of members. Many of the movement’s supporters-and even some of its vociferous opponents-believed “there never was, in this country, a more effective campaign organization than the Wide Awakes.”

The “young men for war” were surprisingly nearsighted, Grinspan reported.

“Though the Wide Awakes were driven by the national experiences of their generation and were participating in a campaign for federal office, they rarely noticed the impact of their political war games,” penned Grinspan. “Later, many members would claim that their militarism showed that they had predicted the Civil War, but at the time they barely saw it coming.”

Instead, Grinspan asserts, the Wide Awakes were a group of young men playing with “a very dangerous symbol.”

“Their militarism became a runaway metaphor, crashing through the divide between politics and culture, election and war,” we wrote. “The surprising and inadvertent power of the movement proves that, in the words of the New York Herald, ‘the fact is all people are public characters themselves.'”

“Though the consequences of their metaphor were unintentional, the Wide Awakes chose it deliberately,” explained Grinspan in his writings. “The campaign’s militaristic symbolism declared their generation’s attitudes toward partisan combat. Throughout their adolescence they watched the Whigs die, the Know-Nothings rise and fall, the Democracy split itself, and a new party, barely six years old, poised to win the presidency.”

Grinspan said, “that club members were reared on stark notions of competition in an age of ephemeral organizations. The Wide Awake generation was coming to see politics as a deadly zero-sum game, and military metaphors acknowledged that a party might be able to massacre its rivals.”

That was what was meant by the joke that “none but Republicans will be born in the United States after the year 1860.”

“Wearing shiny black capes and practicing infantry drills had nothing to do with preparing for civil war; instead, the symbolism reflected the hope that the Republican party might finally finish off the northern Democracy. The Wide Awakes’ story shows that campaign metaphors are not empty hoopla, but rather display the intimate relationship between citizens and their politics.”