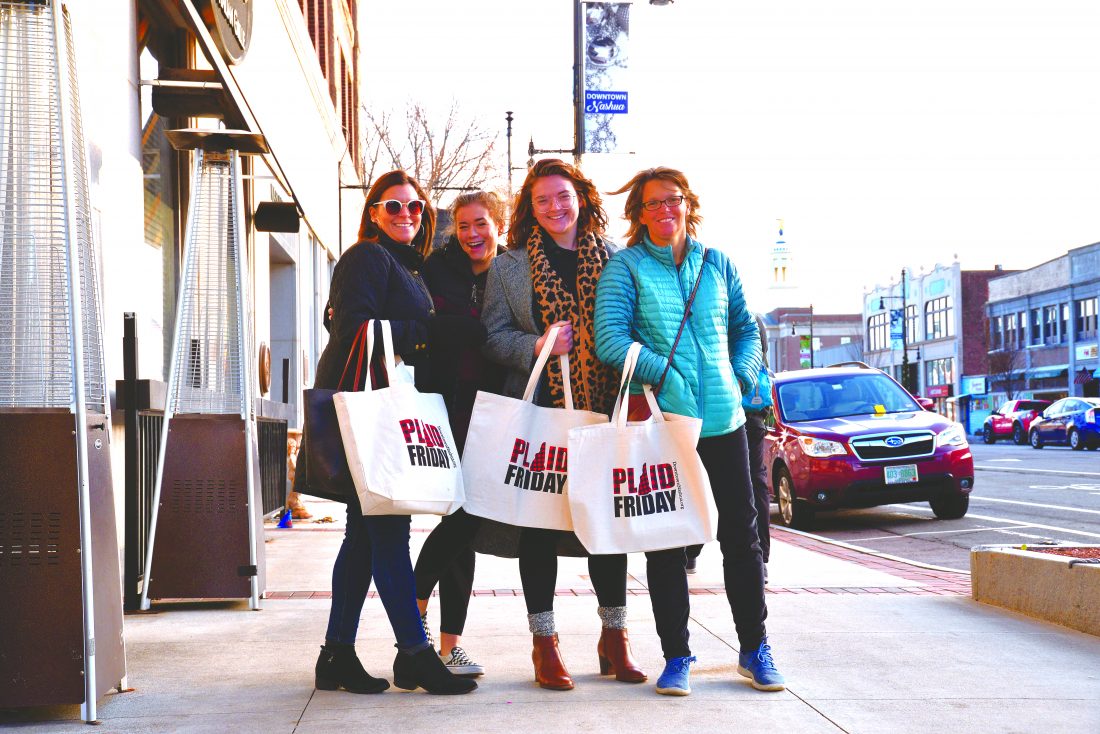 NASHUA – Despite the brisk air sweeping through the city on Friday, many donned in plaid made their way up and down Main Street, spending time at various businesses during Great American Downtown’s Plaid Friday event.

The concept is quite simple: Throw on some plaid attire and visit the 20-plus shops participating in the event, many of whom offered special deals for shoppers. Additionally, shoppers could stop in at 201 Main St. to grab a swag bag, featuring a Plaid Friday logo to take with them for their day. The bags contained a map of participating businesses, as well as coupons and discount offers.

“We are on track to give out more tote bags filled with local business coupons than we did last year,” GAD Marketing Coordinator Kathleen Palmer said Friday afternoon. “Everyone is excited and really getting into the spirit of wearing plaid and shopping local, which is really terrific.”

Palmer is used to the Black Friday stress and chaos that is common at various malls and shopping plazas each year. She said those stopping downtown seemed to have a much more enjoyable experience, with everyone seeming lighthearted, relaxed and friendly.

“It’s pretty darn cool,” Norm Varcoe said while walking downtown with his tote bag in-hand. “It’s very enjoyable and this in association with the (Winter Holiday Stroll) is wonderful, it really is.”

Meanwhile, owner of the League of New Hampshire Craftsmen Nashua Fine Craft Gallery Ruth Boland said business was better than usual on Friday. She said the event is a great way to draw people downtown.

“I think it’s a great concept,” Boland said. “I know, personally, I never go to the big stores on this day. I never have. It’s just too horrible to think about. So, I love the idea that you can come to the small businesses and enjoy your shopping trip.”

Fortin Gage Flower and Gift Shop owner Jody Gage said his business saw great attendance, with many more customers than he believes they would have seen without the Plaid Friday promotion.

He spoke of the differences in shopping at local brick and mortar retailers as opposed to larger stores in that people do not have to fight for parking spots. Additionally, he said at his store, staff members will help customers transport their purchases to their vehicles.

Although many small businesses are unable to compete with the larger retailers on a dollar for dollar basis, they end up getting a bit creative to draw people in, such as with what was seen with Plaid Friday.

“As a small retailer, it’s hard to combat that, so we have to come up with something of our own,” Gage said. “You have to have a reason to bring people down here. It’s not just because we’re a little downtown anymore. That doesn’t work anymore. It has to be more than that. Although we can’t compete toe-to-toe with them, we have to do other things that will appeal to our customers and get them to get away from that a little bit and come on down.”