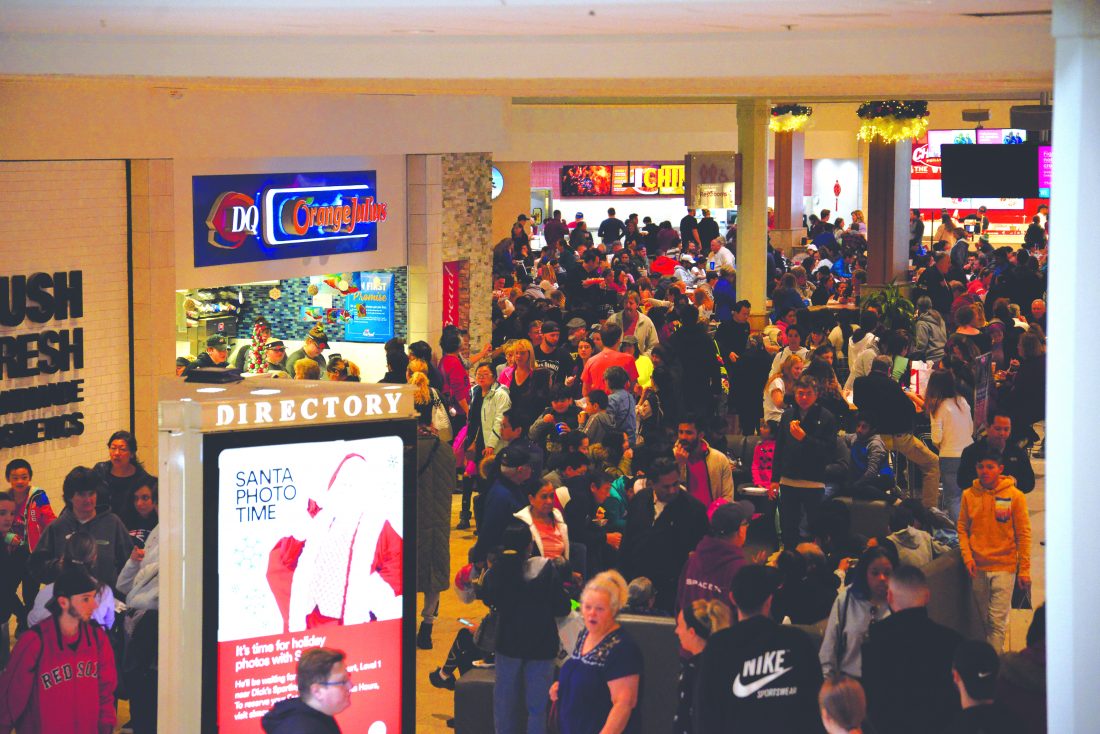 NASHUA – Once shoppers found parking, which was a considerable task on Black Friday, there were plenty of deals to take advantage of inside Nashua’s Pheasant Lane Mall.

“People are parking on the grass just to get in here,” mall spokeswoman Elizabeth Altvater said. “We do try to control it, but you can only do so much.”

While many created their own parking spaces, others looped around the effort to find a space. With a full lot, plenty packed into the mall to scope out the deals being offered throughout the day. While some carried shopping bags in both hands, others came out just to experience the hype of the biggest retail day of the year.

Nicholas Santos was one of many who came out to the mall, but said he and his wife had already done a lot of their shopping early this year, taking to the internet to place their purchases online. He admits he was at the mall just following his wife.

“Got most of the kids’ shopping done already,” Santos said Friday afternoon. “Just trying to get the experience in and I’ll be out of here shortly.”

Although some of the large anchor stores opened slightly earlier, the mall itself opened its doors at 5 p.m,. Thursday for the Black Friday deals. It later closed at 1 a.m. Friday, only to reopen at 6 a.m. The deals finally came to a close at 10 p.m. Friday.

Altvater said that by 4 p.m. Thursday, there was a line for Target that wrapped around the building. With the strong foot traffic starting on Thanksgiving, she said this is definitely the busiest time of year at Pheasant Lane Mall.

“I think, maybe, they need to hire more cashiers because when you go to every single store, there’s always a long line waiting for checkout, that kind of thing,” Jeff Pang said.

Additionally, with the slightly shorter shopping season this year, Altvater said they are seeing an increase in people getting out earlier and doing their shopping. As it is, customers have just about three weeks to finish their shopping.

“We’re seeing tons of bags, especially American Eagle, Victoria’s Secret, so those retailers that have the hot gifts,” Altvater said. “We’re seeing people walking around with those bags, and we’re also seeing a lot of younger shoppers that are almost doing, it seems like, shopping for themselves. So, we’re definitely seeing all different types of crowds today.”

Meanwhile, at the Merrimack Premium Outlets, large crowds were also seen. Spokeswoman Aylin Felch said since shoppers passed through the property during last year’s Black Friday, the property has added three new stores: UNTUCKit, Lacoste and UGG. She said the outlets opened at 5 p.m. on Thanksgiving at 5 p.m., and then again at 6 a.m. Friday.

However, if customers missed out of the Black Friday deals at the outlets, the retail center will be having another sale from Dec. 6-16 called their Ultimate Holiday Sale.

“A lot of folks come as families, basically, to have that great after-Thanksgiving or Black Friday shopping experience,” Felch said. “It’s kind of more of a social event for them to come out. We make sure that our retailers are prepared with lots of expertise in whatever it is they’re selling to make that experience really great for them.”

One shopper experiencing all the deals at the outlets was Diane Lombardi, who described the scene as “absolutely crazy.” She said some of the stores had barriers around them, only allowing two or three shoppers in at a time. She came out because Black Friday shopping is a tradition for her, one she has kept up with for more than 20 years.

“I love to watch the people and the madness, and the craziness. It’s all fun,” Lombardi said.