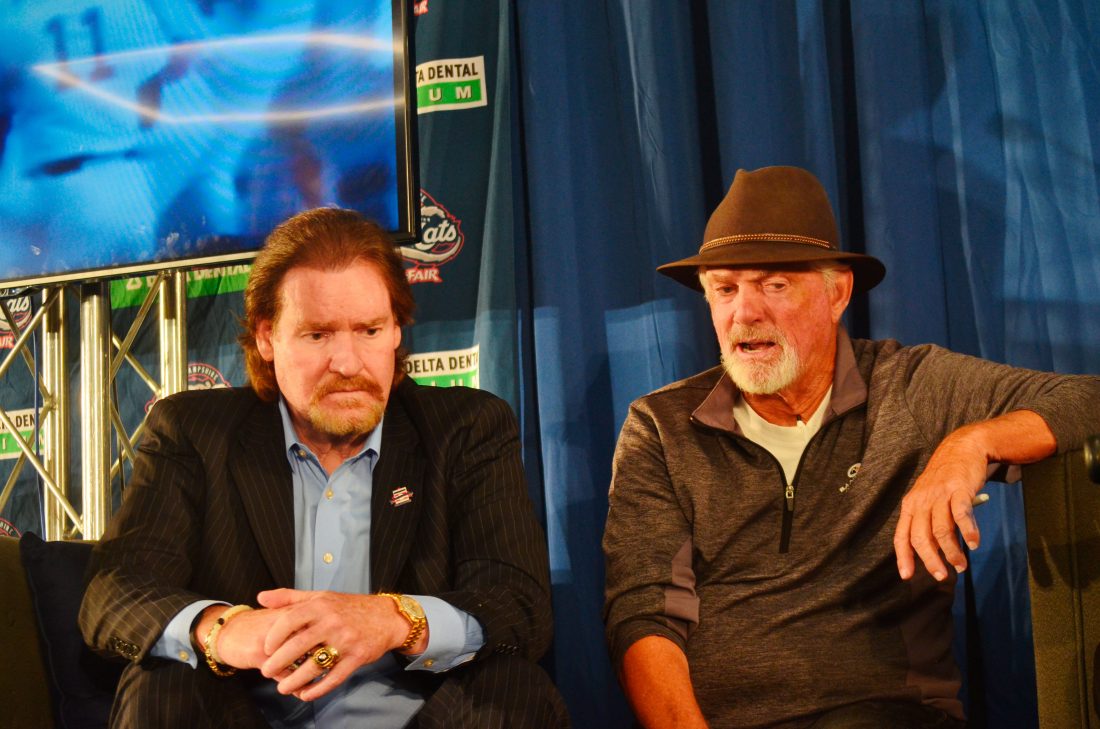 MANCHESTER – Baseball season is still six months away, but New Hampshire baseball fans got something to tide them over Saturday night with the 2019 Granite State Baseball Dinner.

The New Hampshire Fisher Cats, in partnership with the Ted Williams Museum and various sponsoring organizations such as The Telegraph, organized this year’s event. Through that sponsorship as well as ticket sales and silent and live auctions, the event has generated more than $1.75 million in college scholarships for New Hampshire and Massachusetts student-athletes as well as worthy charities such as the Children’s Hospital at Dartmouth-Hitchcock and the Fisher Cats Foundation.

This year’s event aimed to rekindle the rivalry between the Boston Red Sox and New York Yankees, with Hall of Famers Goose Gossage, Bucky Dent and Wade Boggs joining a panel of other baseball legends to share memories of days gone by.

Among that group of guests included “Spaceman” Bill Lee, a key member of the Red Sox pitching staff for much of the 1970s.

Lee attended the event last year, and also played his last minor league game in Manchester in 1969 before being called up to the majors for good. Although he holds no grudges about the painful 1978 Red Sox season that ended with Dent’s home run in a one-game playoff. He praised the event for all it has done for charity. He still joked, though, that it wasn’t entirely fun reliving the memory of Dent’s home run.

“People don’t want to know the rest of the story, that is was definitely a conspiracy, that if I had pitched the majority of the ’78 season, Dent would have never come up to the plate,” he said. “(But) if you seek revenge, you dig two graves. (Former Red Sox Manager Don) Zimmer was wrong, (Former New York Yankees Owner George) Steinbrenner was wrong, and New England was right. I am living proof that we should have won it.”

The concept of bringing former Red Sox and Yankees together came about after the Fisher Cats learned that Gossage and Dent would be available to come as one of this year’s guests, building a dynamic that made this year’s event distinct.

“My first thought would be, ‘won’t Red Sox fans be angry if Bucky Dent is here?'” said New Hampshire Fisher Cats Media Relations Manager Tyler Murray. “But then we thought, let’s use that rivalry and we actually saw people with Red Sox/Yankee rivalry hats and T-shirts, so people really responded well to it.”

Although an official amount on how much will be donated to charities from this year’s dinner was not immediately available, Murray said the event had already outsold the 2018 dinner two weeks earlier.

However, the value of any charitable donations is only magnified by the opportunity for local baseball fans to see their heroes up close.

“It felt like one of the best crowds we had, one of the best engagements from our celebrity players. They always do a good job making our guests feel special,” Murray said. “We’ve never ended a Granite State Baseball Dinner not feeling great, because we’ve been able to raise either at or close to $100,000 for CHaD and the Fisher Cats Foundation every year, so we always come away feeling great. But this year especially, it’s a really rewarding event, and we can’t thank our fans enough for making it so special.”

Saturday’s dinner was just one of several events off the baseball field involving the Fisher Cats, ranging from a 5k run scheduled for next week and Halloween trick or treating last month to food truck festivals, extreme sports spectacles like Nitro Circus and New Hampshire Magazine’s Best of NH celebration.

The Fisher Cats 2020 season begins on April 9 against the Reading Fightin’ Phils. Their home opener will take place on April 16 against the Hartford Yard Goats.