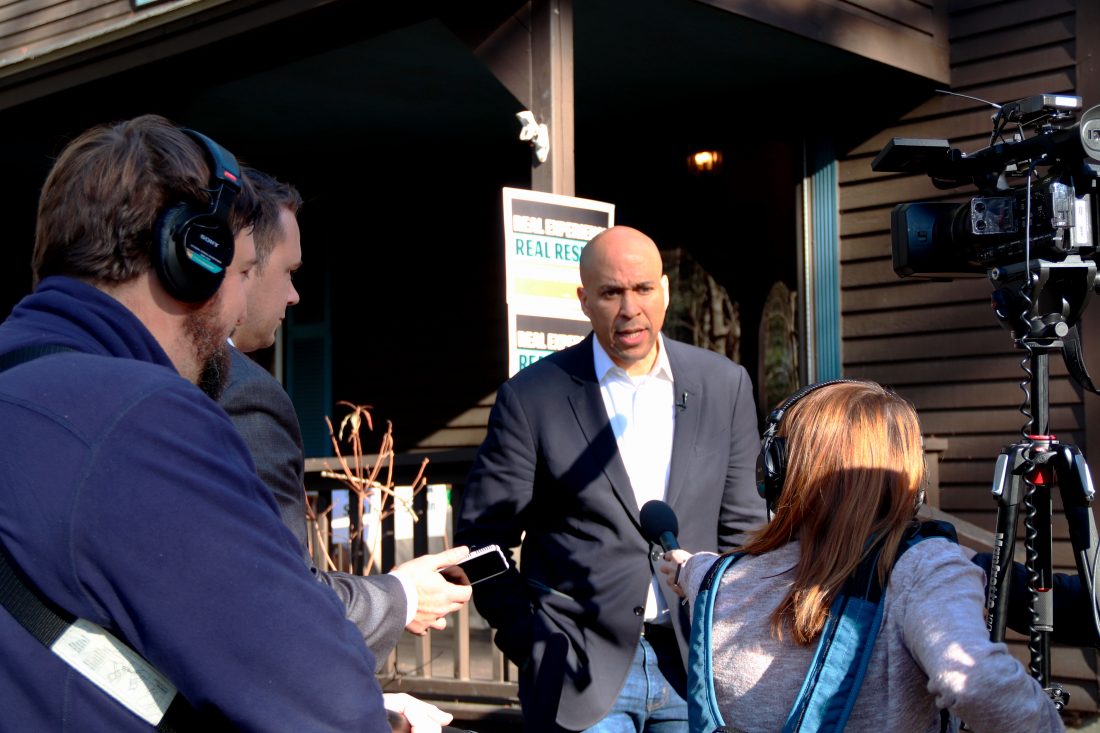 “This is a moral moment,” Booker told the capacity crowd. “This election is not going to turn on ‘me,’ it’s going to turn on ‘we.’ What we choose to do in a time of crisis in our country. How will we rise to this moment that needs the best of who we are?”

Booker said, that if he was elected president, he would ask more of the nation, in terms of volunteerism, recreating the authenticity of community and a call “to ignite the moral imagination of this country again.”

The presidential hopeful ignited the room with his unique blend of spark and almost evangelical charisma before taking questions from the audience.

“How will we end division and unite the country?” asked a woman.

“The first step is to get somebody out of office that every day, uses his platforms from Twitter to the rose garden to demean, degrade and divide this nation,” said Booker. “This is the purpose of my life. Everywhere I go I have been trying to bring people together. That’s where our strength is – the power of the people is greater than the people in power.”

Booker talked of bringing the people of Newark together: As a city councilperson, he said he would live in a tent on the pavement in the projects, until help and support for those living there arrived.

“It took ten days, and thousands of people from our region came out to help,” he said. “Suburban police officers came down to do shifts to help create safe communities. And eventually the mayor capitulated, came out, and declared that he would bring police out to build a park in the neighborhood and take action.”

As for unifying the country, Booker said his career has been about making people care when they haven’t cared before.

Another person queried about the African American vote — and if Booker had it.

“After this state, the majority of the electorate from Maryland to Mississippi is African American in those key Super Tuesday states,” said Booker. “And even in states where it is not the majority — remember Bernie Sanders beat Hillary Clinton in the white electorate of the Democratic party — Hillary won because she had such overwhelming minority support.”

“When you look at the delegate math,” he continued, “there is no way to the nomination, unless you are appealing to the African American voters.

Booker said ultimately, it’s not enough to beat the incumbent.

“Look at the coalition that Obama inspired,” he said. “If we want to win this election, it’s not about just winning the White House. We need to beat Mitch McConnell as well. And to beat McConnell, we need a wave election – like we had under Bill Clinton and Barrack Obama. Wave elections mean we need to get record turnouts in North Carolina. We won that state for Obama in 2008. We need to win it in 2020 so we can win the senate seat there. There are two seats up in Georgia — we can get them. Lindsey Graham is trying to run for re-election in South Carolina. And we can beat him.”