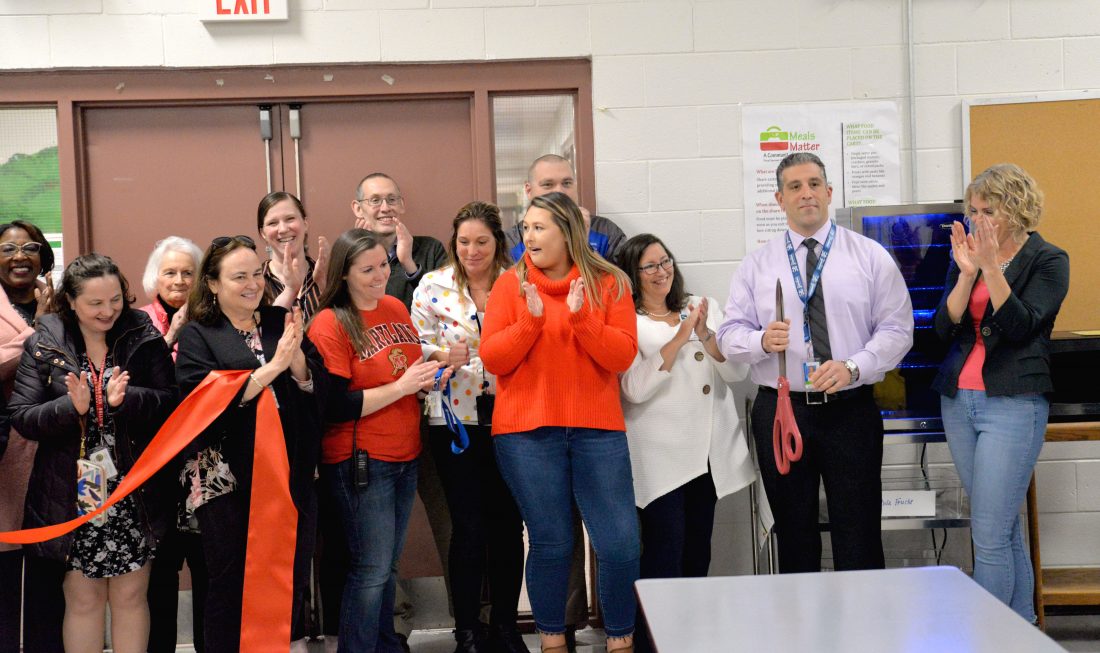 Share Carts are expanding their reach, and on Friday, officials celebrated their expansion at Pennichuck Middle School in the school’s cafeteria.

Via the carts concept, students share any unwanted food they may have by placing it into the bins or a refrigerator on the cart so other children can find a need for it. Whether a student utilizing the cart is food insecure, or just particularly hungry on a certain day, the carts are open to anyone.

“This is a perfect set up because it doesn’t segregate out who does and who doesn’t have food,” Principal Gabriel Falzarano said. “You can’t tell.”

He said this gives them an opportunity to really allow the kids to put to use some of the food they may not want, especially since the kids do have to take some food items, even if they do not want them.

“This is something that should have been done all along,” Falzarano said.

Share Carts is a project designed by the students involved with Meals Matter, which is a program that began at Nashua High School South with the mission of bringing a permanent end to “No Money, No Food” by providing improved access to school lunches to all students. While fighting the issues of food insecurity, the carts initially started in the high schools. The idea was sparked by high school students last year, and is now being carried forward.

“This year, we are hoping to install the Share Carts in all 17 of the schools,” marketing teacher at Nashua High School South and coordinator for the Meals Matter program Suzanne Winters said. “We actually purchased 17 carts and refrigerators over the summer and we put them all together last week, and we started to deliver them on Wednesday. And we hope to have them in all the schools shortly after the first of the year so that all kids will learn about reducing food waste, and sharing with other people and helping people who have a need.”

She said many students are involved in activities at the end of the school day. They do not always have a snack from home, so this can sustain them for the day. Moreover, as of Friday, Winters said four schools have these Share Carts installed: Pennichuck Middle School, Charlotte Avenue Elementary School, New Searles Elementary School and Nashua High School North. A cart is scheduled for Monday installation at Nashua High School South. The hope is still to have the other carts placed in the remaining schools after the beginning of the year.

“We have a tremendous need in this district,” Winters said. “I know our free and reduced lunch numbers hover around 40% every year, but that doesn’t truly represent the real need because there are a lot of people who fall just shy of meeting those free and reduced levels that really don’t have the opportunity or the access to food on a daily basis.”