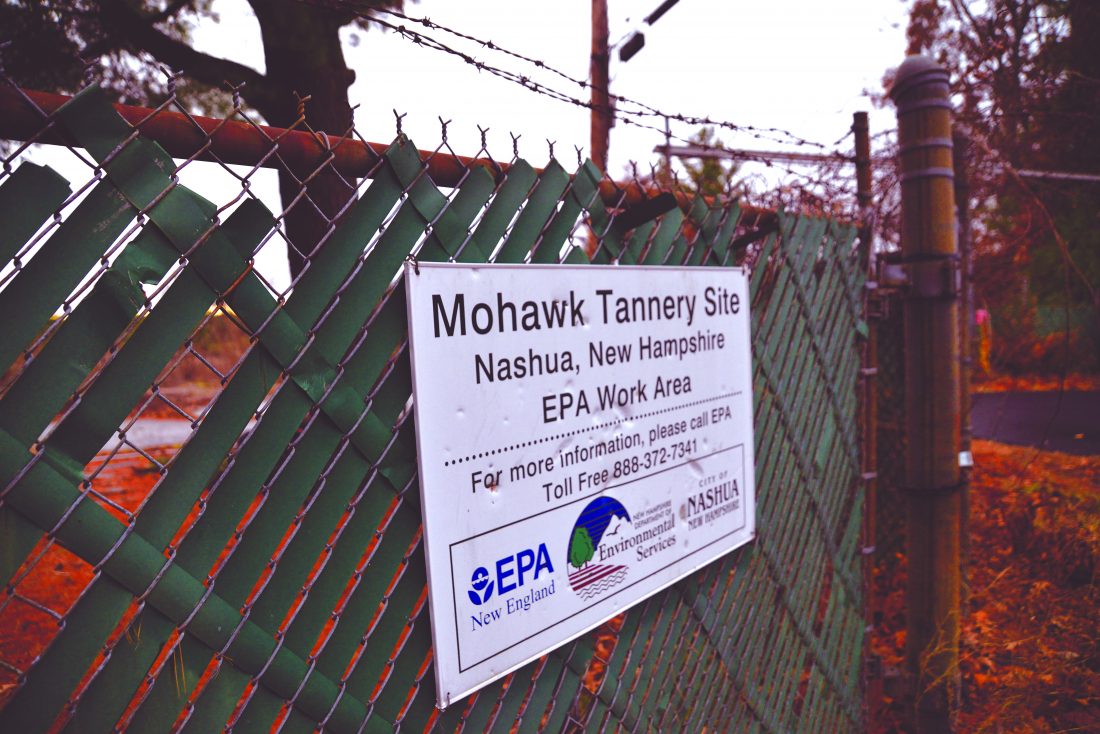 Telegraph photo by ADAM URQUHART As the sun sets to the west of the Mohawk Tannery site on Friday afternoon, future remediation work is on the horizon and could begin next year.

Plante hopes taking this action will eventually allow for redevelopment of the site at the end of Fairmount Street.

“It’s a complicated regulatory process that we must go through. So, I’m hoping to get it underway in 2020,” Plante told The Telegraph on Friday.

The tannery is classified by the U.S. Environmental Protection Agency as a Superfund site. From about 1924 to 1984, the site was used to tan leather hides.

Today, a range of substances remain. Plante said chromium is by and far the most common component remaining at the site, although there is also asbestos.

“I’m pleased with the fact that the EPA and New Hampshire DES (Department of Environmental Services), and the city are working cooperatively with us for this solution,” Plante said.

During the Tuesday Nashua Planning and Economic Development Committee meeting, Director of Community Development Sarah Marchant gave other city leaders an update on tannery redevelopment project. The site includes two lagoons, the Fimbel Door landfill and the city owned property, which has asbestos. The two lagoons were once used for waste disposal operations and are filled with sludge and other residues.

“Essentially, all waste from all properties on the site will be consolidated together in one spot,” Marchant said during Tuesday’s meeting.

A vertical containment will be used to house all of this material, officials said. In addition to capping the contaminants, Marchant said the goal is to also add a groundwater protection district to protect the groundwater from any future contamination.

“The capped space will be a permanent green space and no development can happen there,” Marchant said.

However, Marchant said areas around the cap would be acceptable for redevelopment use.

Marchant also said EPA officials stated that their goals for the project are to prevent contact with contaminants that are on the site now, prevent further release of them and prevent them from getting into the Nashua River in an especially large flooding event. Additionally, a goal is to make sure there is no additional exposure to the waste.

Plante said it is still undecided who will do the containment system construction and remediation work. However, because Blaylock LLC is the owner, at a minimum, the company will oversee the work.

He said Blaylock generated an 80% set of drawings and specifications for the work. Meanwhile, the city and EPA each hired their own consulting groups and peer review groups to review the proposals. He believes it would be premature to provide pricing until all the changes have been implemented.

Once those changes are made, and the remediation work is complete, the site could later feature a combination of multifamily housing, which could be condos, apartments, age-restricted housing, assisted living and independent living. Additionally, Plante said there will likely be some commercial use along the Broad Street Parkway side of the site.

“That’s where we are right now, but that work would start simultaneously with the remediation. So as we’re remediating, we’ll be starting the redevelopment work,” Plante said.