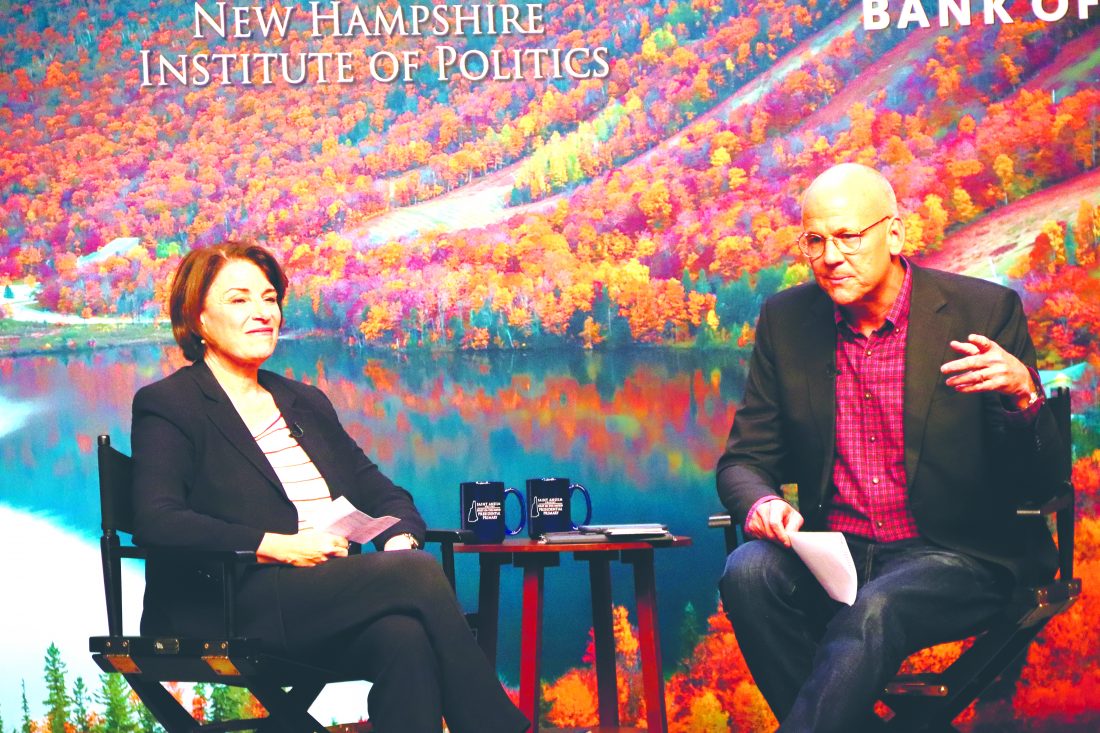 The public policy series is moderated by journalist John Heilemann of Showtime’s “The Circus.” It featured Klobuchar, a U.S. senator from Minnesota, in a more relaxed setting. This allowed her to talk about her views on running for president, as well as to take a few questions from the audience.

Heilemann began the program by asking Klobuchar about her “big takeaways,” from the recent testimonies and questions and answers featured during the open impeachment hearings.

“I hope we’ve learned that we want leaders in our politics that are as good and strong as people like Fiona Hill and like Ambassador (Marie) Yovanovitch and like (Lt. Col. Alexander) Vindman, and so many of the others,” Klobuchar said. “I don’t think they ever imagined that people that got into public service, many of whom served under Republican and Democratic presidents, that they would ever be testifying in an impeachment proceeding. You could tell – but they were true to themselves. I think that is a good way to begin today because we’re in a state that’s always stood for patriotism and stood for good government and civility and putting your country first.”

Klobuchar said she didn’t know what was going to happen with the proceedings and “if they were done collecting evidence – that’s up to the House.”

“In the end, this is really about a president who put his own partisan interests and his own private interests in front of the public’s interest,” she added. “People can debate what they think should happen – that’s OK. You can’t take away from those people who testified what they believe and what they think should happen. Because every day they go to work, representing our nation, no matter who the president is, and they are going to work because they believe in our country. That’s really what I want to have back in the White House.”

Klobuchar discussed sponsoring two bills that never made it past the Senate floor. One was for the Secure Elections Act.

“I had that bill with (U.S. Sen. James Lankford, R-Okla.), for quite a while and we valiantly tried to get it done and we were gut-punched by (U.S. Senate Majority Leader) Mitch McConnell,” she said, “who called Republicans, who told them not to allow it to come to the floor – no one has ever disputed this. That happened last December, less than a year ago.”

Klobuchar also sponsored a bill to stop social media companies from accepting ads that do not state who paid for them.

“That was a bipartisan bill that I once led with (the late U.S. Sen. John McCain, R-Ariz.),” she continued. “This has been really disappointing. And it should give you some sense of what we’re heading into. I thought the one thing you should not forget what Fiona Hill said, yesterday which was the Russians are gearing up to do this again.”

Heilemann asked Klobuchar what could be done to stop election interference.

“This is more than an impeachment proceeding,” Klobuchar said. “When you were asking that question, I was reminded of Sen. John McCain. He brought me and (U.S. Sen. Lindsey Graham, R-S.C.) on a trip to the Baltics – to Ukraine, Lithuania, Latvia, Estonia, and Georgia. And his whole point of going there was to tell those countries that we stood with them. And we stood with them across party lines and we stood with them in their fight for independence for their democracy against Russia. He knew and was more wise than I think many people were in Washington, of what we were headed into and what we had just gone through with that election. I just wish he was here right now. I think he could have played a major role in the Republican Party to make this point that Fiona Hill did.”

“If you don’t believe this, watch what she said,” Klobuchar said. “Impeachment is essentially a decision of our country. Look at this. You are the jurors who are going to decide this.”