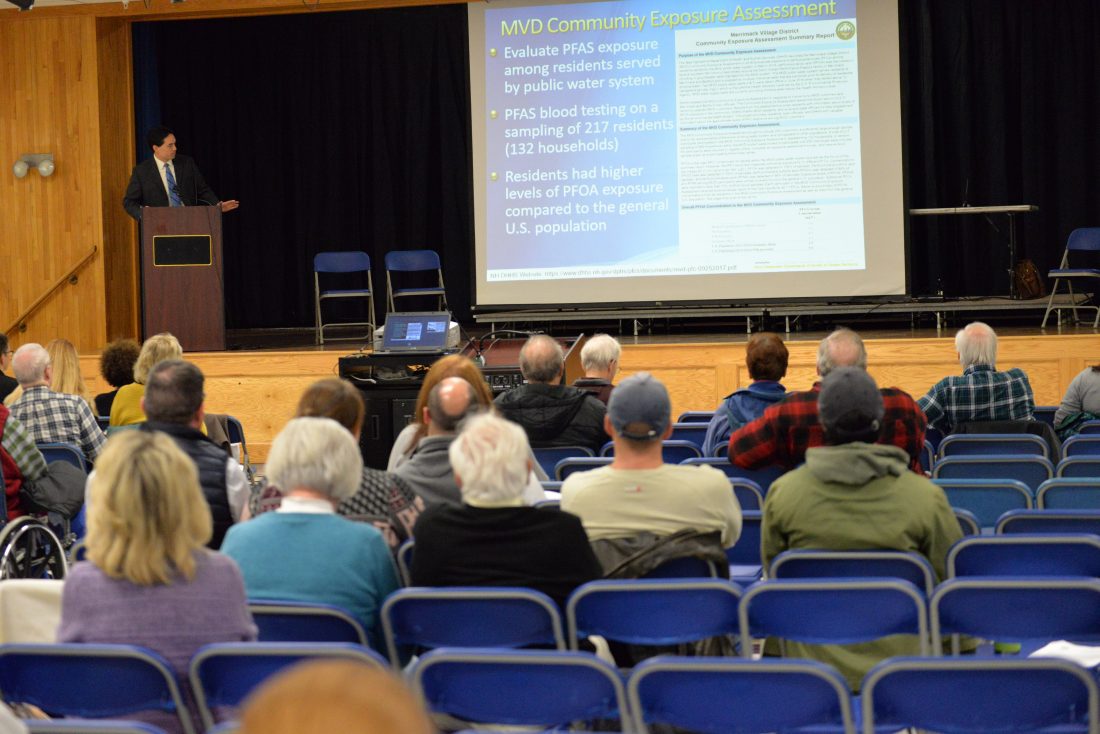 “Most people in the United States have been exposed to these chemicals,” Chan said during a Wednesday information session at Merrimack High School.

Officially known as per-and polyfluoroalkyl substances, PFAS have presented a number of challenges in recent years for those living near the Saint-Gobain Performance Plastics plant in Merrimack.

PFAS consist of more than 3,000 compounds, with new materials continuing to develop. These human-made chemicals have been used widely in industry and home products since about the 1950s. They have since been used extensively because of their chemical properties.

Applications of PFAS include:

Chan said there are a number of health outcomes being looked at as potential health complications from exposures to these chemicals. However, U.S. Environmental Protection Agency information states the chemicals can:

• Increase risk for cancer; and

However, the Seacoast and central New Hampshire are not the only areas identified as having PFAS present. This problem extends its reach beyond New England to cover communities across the country, and internationally.

Chan also said officials with the Agency for Toxic Substances and Disease Registry (ATSDR) – a sister agency to the Centers for Disease Control and Prevention – are out working to perform exposure assessments throughout the nation.

“We need to learn how exposure relates to health outcomes and so there has been congressional funding put through to fund a national, what’s being called a multisite, health study to look at the potential, and further the science around the potential health impacts for PFAS exposure,” Chan said.

Chan said Pease serves as a pilot for this larger, multisite national health study. However, of the seven other sites, Merrimack will not be included, although efforts were made to include southern New Hampshire communities such as Merrimack.

“However, the findings from this multisite national health study are expected to be applicable to all communities that have potential exposure to these chemicals through drinking water,” Chan said.

Meanwhile, New Hampshire Department of Environmental Services Toxicologist Jonathan Ali said what is unique to PFAS is they can accumulate within the body over time.

He also used his time to speak about some of the next steps to be taken as an agency. The first is that in January, DES is going to be submitting a plan to the Legislature detailing how much it will cost, the time that is needed and what they need to do in order to set surface water standards, which will protect fish, wildlife and water for swimming.

Earlier this year, Merrimack officials extracted data from reports created for Saint-Gobain by two companies, Golder Associates and Barr Associates. Tucked away in 6,000 or so pages were test results, which served as the basis for the town of Merrimack to send a letter to the company and New Hampshire Department of Environmental Services, seeking to have production discontinued at the facility due to ongoing environmental contamination.

For example, data extracted from the report those two companies did for Saint-Gobain show that on Sept. 10, 2018, Golder sampled roof drains, with the highest roof drain concentration of PFAS set at 52,000 parts per trillion. The current New Hampshire limit is only 12 parts per trillion.