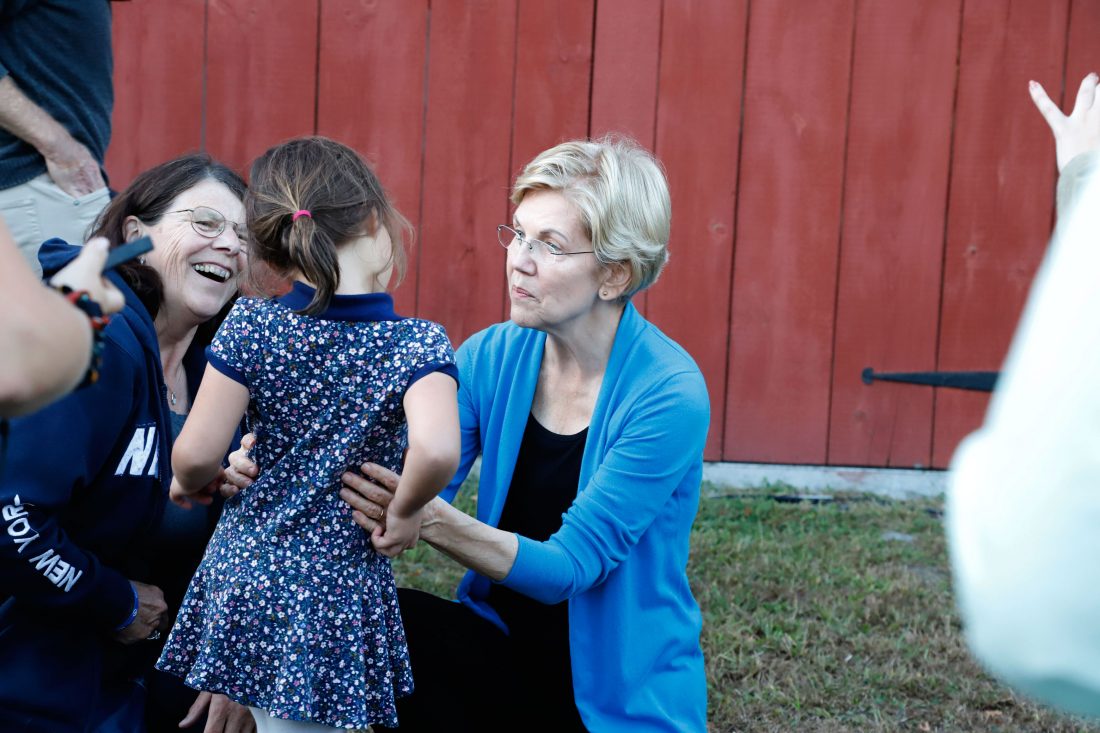 NASHUA – If you can think of a political issue – whether it is health care, education, foreign policy, climate change, gun control, or “Wall Street’s stranglehold on our economy” – chances are Democratic presidential candidate Elizabeth Warren has a plan for it.

A CBS News/YouGov poll released on Monday shows the U.S. senator from Massachusetts surging back into the lead in the race for New Hampshire’s first-in-the-nation (#FITN) presidential primary. This comes after a Quinnipiac University poll released just last week showed that Joe Biden of Delaware had passed Warren to taken the lead in the Granite State.

Though polls will likely remain fluid from now until New Hampshire Democrats vote in February, Warren’s deluge of plans continued on Monday. She identifies the lack of affordable housing as a major issue that deserves attention.

“My plan will bring down the rents by 10% nationwide,” Warren said on Monday in releasing her “Housing Plan for America.”

“My plan would add more than 3 million new affordable housing units, and I’ll commit to prioritizing a portion of these units to particularly vulnerable groups like the chronically homeless, people living with HIV, people with disabilities, seniors who want to age in place, and people who have been incarcerated and are returning to the community,” Warren added.

The burgeoning homelessness problem in downtown Nashua is more difficult to ignore than to notice. Signs include, but are not limited to:

• The displaced individuals sometimes found sleeping on the wooden deck near the Jackson Falls Dam in the Nashua River;

• The tents often visible within Mine Falls Park;

• The cooking fire that got out of control last month at an encampment under the bridge that carries the Broad Street Parkway over the Nashua River; and

• The fact officials at the Nashua Soup Kitchen & Shelter are working to raise $3 million to renovate the former Sacred Heart School by 2021, for the purpose of using it as an additional homeless shelter.

According to the New Hampshire Housing Finance Authority, the median monthly cost to rent a two-bedroom apartment in Nashua is $1,506 – while the high point of the rent range is $2,074.

“A lack of affordable housing is creating a surge in homelessness, particularly among families, in New Hampshire and around the country. Senator Warren’s plan doesn’t criminalize the victims of this. It protects them and directs much needed resources toward increasing affordable housing,” Nashua Board of Aldermen member Tom Lopez said.

Also, information from the authority shows the apartment vacancy rate for Hillsborough County, which also includes Manchester, is now just 1%. This compares to the 4.9% registered a decade ago.

To combat problems such as those some see in Nashua, Warren proposes several measures, including:

• Investing $500 billion to “build, preserve, and rehab more than 3 million units that will be affordable to lower-income families;”

• Working to “eliminate toxic substances like mold and lead from all housing and drinking water sources;” and to

• “Stop federal dollars from going to predatory landlords and lenders with a long history of harassing tenants.”

According to CBS News/YouGov, researchers surveyed 535 registered Democrats in New Hampshire from Nov. 6-13. Results are as follows for their preferred presidential candidate are as follows: