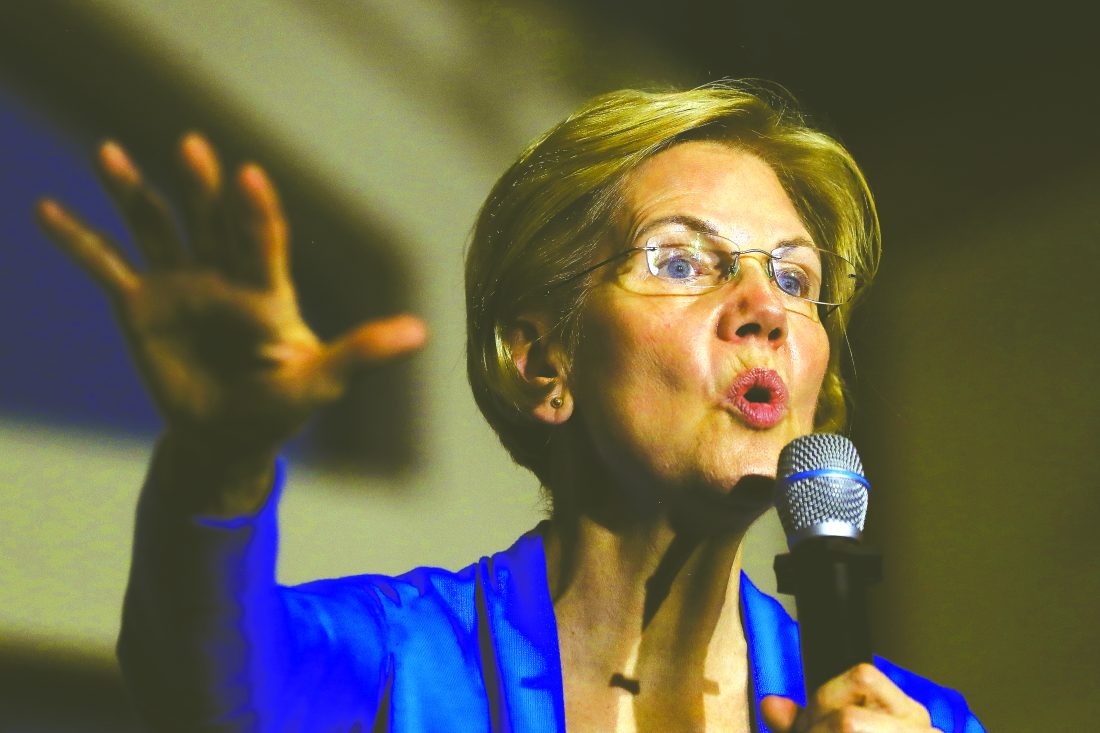 FILE - In this Nov. 11, 2019 file photo, Democratic presidential candidate Sen. Elizabeth Warren, D-Mass., addresses an audience during a campaign event in Exeter, N.H. Warren’s proposed wealth tax is putting her at odds with some of Wall Street’s wealthiest, and the fight is increasingly spilling out into the open. In an interview on business new channel CNBC Thursday, Nov. 14, billionaire investor Leon Cooperman said Warren’s plan to impose a new tax on the nation’s richest people would “penalize success” and that a Warren presidency would mean “big trouble” for Wall Street and the country. (AP Photo/Steven Senne, File)

“If this lady wins, we’re in big trouble,” Cooperman said Thursday in an interview on business news channel CNBC.

The Massachusetts senator’s campaign for the White House has made an issue of income inequality and Warren has said she would push for new taxes to help pay for programs such as expanding Medicare, forgiving student loan debt and spending on infrastructure.

One key proposal of her campaign is a 2% tax on every dollar of an individual’s wealth above $50 million. Her supporters are known to chant “two cents! two cents!” at many of her rallies.

As Warren has moved up in the polls among the Democratic candidates, the reaction from Wall Street and the financial industry has become louder and more antagonistic.

“Vilification of people as a member of a group may be good for her campaign, not the country,” Blankfein said in a tweet on Thursday. He did note that Warren was “not my candidate, but we align on many issues” without specifying which issues.

Warren and her campaign appear to relish the conflict. The campaign has released an ad highlighting her wealth tax. The ad includes a clip of Cooperman and notes that the hedge fund manager was once charged with insider trading by the Securities and Exchange Commission. Cooperman settled that case with the SEC in 2017, not admitting any guilt, and paid a $5 million fine.

The ad is running on CNBC, which runs in the background on investment bank’s trading floors. Cooperman sparked the feud on the network a month ago by saying the stock market would fall 25% if Warren is elected. In a subsequent CNBC interview, Cooperman teared up as he got emotional while complaining that Warren was painting billionaires as “deadbeats.”

Warren’s campaign is now selling a “billionaire tears” coffee mug on its website.

Wall Street is a popular punching bag for politicians in an election season. In the 2016 campaign, both Republicans and Democrats had in their official party platforms a plan to break up the big banks. In his own campaign, then-candidate Donald Trump ran an ad that criticized a “global power structure that is responsible for the economic decisions that have robbed our working class, stripped our country of its wealth and put that into the pockets of a handful of large corporations.” As Trump said “large corporations” in a voiceover, the ad cut to an image of Blankfein.