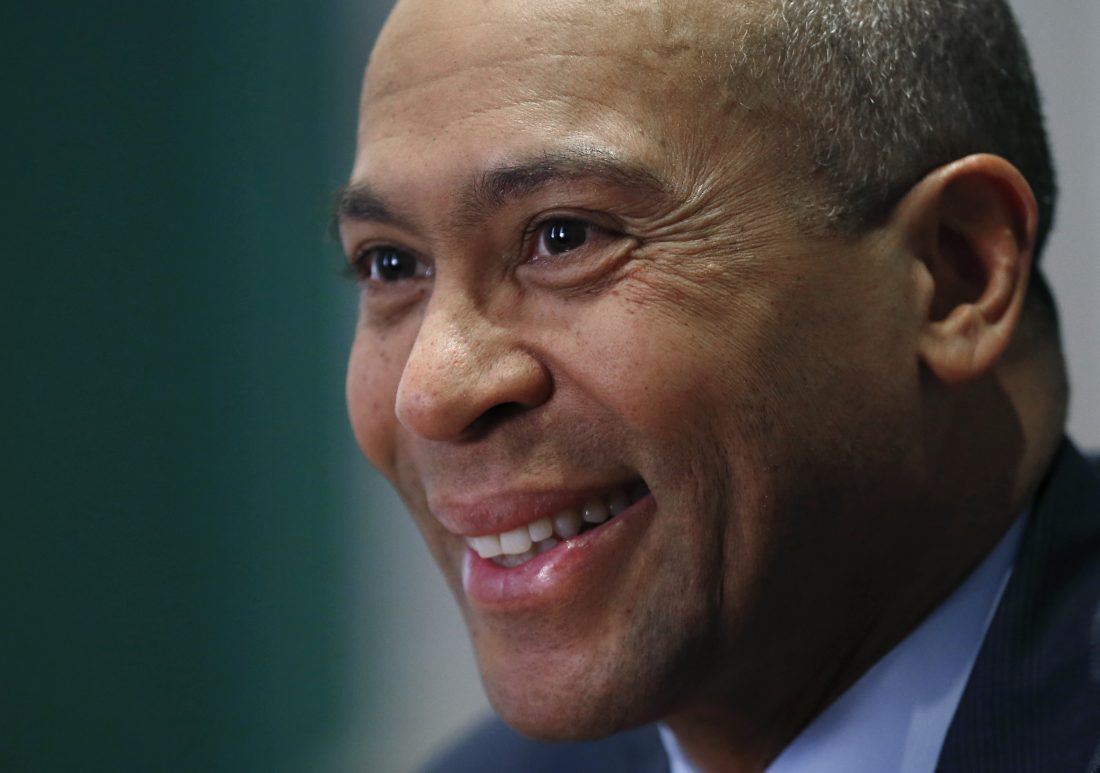 FILE - In this Dec. 15, 2014, file photo, Massachusetts Gov. Deval Patrick speaks during an interview at his Statehouse office in Boston. Former Massachusetts Gov. Patrick is considering making a late run for the Democratic presidential nomination. That is according to people with knowledge of Patrick’s deliberations. (AP Photo/Elise Amendola, File)

WASHINGTON (AP) — Former Massachusetts Gov. Deval Patrick is telling allies that he will join the 2020 presidential race, according to two people familiar with his plans. An official announcement is expected before Friday, the filing deadline for the New Hampshire primary.

His move injects a new layer of uncertainty into the contest less than three months before the first votes. Patrick, a popular two-term Democratic governor with a moderate bearing and close ties to former President Barack Obama, is starting late but with a compelling life story and political resume.

The two people with knowledge of Patrick’s plans spoke to The Associated Press on Wednesday on condition of anonymity to discuss private conversations.

In addition to Patrick, Michael Bloomberg, the billionaire former mayor of New York City has taken steps toward launching a last-minute presidential campaign, filing candidate papers in Alabama and Arkansas.

The moves reflect uncertainty about the direction of the Democratic contest. Joe Biden entered the race as the front-runner and maintains significant support from black voters, whose backing is critical in a Democratic primary. But he’s facing spirited challenges from Elizabeth Warren and Bernie Sanders, progressives whose calls for fundamental economic change have alarmed moderates and wealthy donors.

Patrick’s candidacy faces a significant hurdle to raise enormous amounts of money quickly and to build an organization in the traditional early voting states that most of his rivals have focused on for the past year. And he’ll have to pivot to the expensive and logistically daunting Super Tuesday contests, when voters in more than a dozen states and territories head to the polls.

Bloomberg’s team has said they will skip the early states of Iowa, New Hampshire, Nevada and South Carolina to focus on the Super Tuesday roster.

If he gains traction, Patrick could pull together multiple Democratic constituencies. A former managing director for Bain Capital, he has close ties to Wall Street donors. And as the first black governor of Massachusetts, Patrick could present himself as a historic boundary breaker who could dent Biden’s support among African Americans.

Patrick has remained active in politics since his term as governor ended in 2015.

During the 2018 midterm elections, he traveled across the country in support of Democratic candidates, a move that helped raise his national profile. He also campaigned for Doug Jones during Alabama’s contentious 2017 special election for U.S. Senate.

By December, however, Patrick cooled to the idea of a White House campaign.

“After a lot of conversation, reflection and prayer, I’ve decided that a 2020 campaign for president is not for me,” Patrick posted on his Facebook page at the time. Patrick said he and his wife worried that the “cruelty of our elections process would ultimately splash back on people whom Diane and I love, but who hadn’t signed up for the journey.”

For years, Patrick had been on an upward swing in Democratic politics, having served two terms as governor. He was only the country’s second black elected governor since Reconstruction.

In 2012, he gave a rousing speech in defense of Obama at the National Democratic Convention, urging fellow party members to “grow a backbone” and fight for their ideals. Obama at the time was being challenged by former Republican Massachusetts Gov. Mitt Romney — Patrick’s predecessor in the governor’s office.

Patrick grew up in Chicago, Obama’s adopted home. Both men have campaigned for each other.

Patrick has also tried to position himself over the years as slightly more moderate than some on the Democratic left.

After Donald Trump’s election, Patrick’s initial criticism of the Republican president was somewhat less pointed than others in his party. He said he was “old-fashioned in the sense that I think nobody should cheer for failure. We need our presidents to succeed,” but said he was particularly concerned about what he described as Trump’s belittling of those with opposing points of view.

Patrick also urged the party at the time to look in the mirror, saying “the outcome of the 2016 election was less about Donald Trump winning than Democrats and our nominee letting him do so.”

Last year, some of Patrick’s supporters and close advisers launched the Reason to Believe political action committee, “a grassroots organization dedicated to advancing a positive, progressive vision for our nation in 2018 and 2020.”

The PAC held meetups across the country, including in early presidential primary states, and was seen as a possible vehicle to help support a Patrick candidacy. It was formally dissolved earlier this year.