Hassan aims to aid teens on route to college 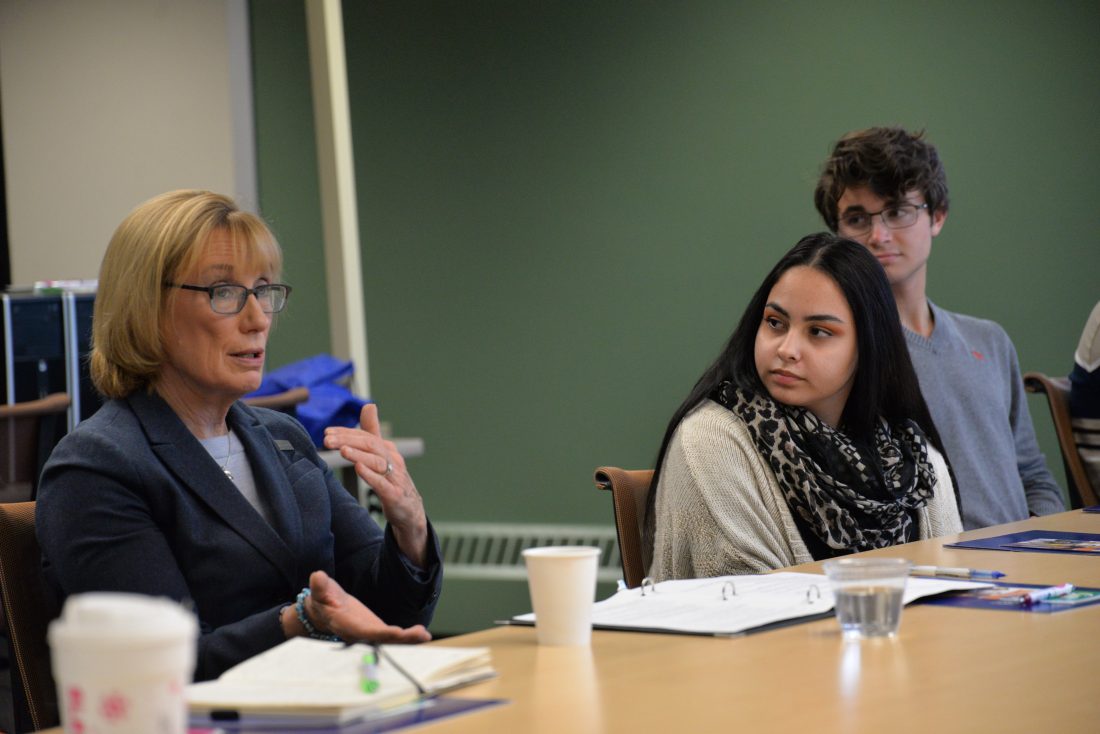 NASHUA – Getting an early start on college is becoming more popular among high school students in Nashua, and U.S. Sen. Maggie Hassan, D-N.H., is looking to expand opportunities for students to earn college credits ahead of time.

Recently, she and U.S. Sen. Todd Young, R-Ind., introduced a bill to create a grant program to help more students earn credits while still in high school. Having access to such opportunities can increase college completion rates, while also cutting costs.

Tuesday, Hassan sat with a group of high school students, teachers and education leaders at Nashua Community College (NCC) to discuss this new bill, Fast Track to and Through College Act.

“It is part of ongoing efforts that I’m making to give students various career pathway options and education options for a variety of reasons,” Hassan said. “One, because people learn differently and at different paces, and our education system is increasingly recognizing that and trying to make sure that we are meeting students where they are, not where the education system says we want them to be.”

College President Lucille Jordan said officials have been very successful with Running Start, which partners with the Community College System of New Hampshire in providing high school students with the opportunity to take classes that will count toward a college degree.

“We, each year, keep increasing our enrollment,” Jordan said. “I think the success is not only the students who desire to earn credits to lessen their load, but also the relationship of our faculty with the faculty at Nashua. It’s very key that that happens and I think the success for us has been for that reason, as well as the whole system.”

She also said early college in the city is big, which allows the students to come to the campus to get credits, several of whom come in after being home-schooled.

She said the issue for some of them, however, is they would not have the financial support in Early College, where they would in Running Start. The Fast Track to and Through College Act aims to do a number of things, and one of which includes expanding access to the programs by allowing Pell Grants to cover dual-enrollment costs for low-income, Pell-eligible students in states that receive one of these fast-track grants.

Hassan said it is very important to try to make sure that the entire higher education and/or career training process is much more affordable and fits into the real lives of students and their families. She worked with Young on this bill so that states can apply in this competitive grant program to make sure that they have supports set up or to expand this kind of early college or college credit program.

“Running start is very successful, and now we have to take it to the next level,” Jordan said.

Another focus of the bill is to make sure the system is not leaving first generation folks out, and to make these courses are affordable, which is why Hassan said the Pell Grant coverage of the dual-enrollment courses is so important. Furthermore, Jordan also inquired about including DACA (Deferred Action for Childhood Arrivals) in the bill, citing that Nashua especially is seeing a lot more of those students.

“This is about citizenship and Democracy too,” Hassan said. “A well-educated group of citizens is really critical to our future as a country.”

Meanwhile, New Hampshire has an unusual higher education association, featuring a mixture of both private and public institutions, which does not occur in many other states. Hassan believes private universities do need to consider how they are going to handle this kind of model because, increasingly, the state has strong public colleges and universities providing these sorts of options.

“I think a lot of traditional private colleges and universities have a business model that counts on people being there for four years with a package of full tuition money, whether it’s a mix of loans and grants and private pay,” Hassan said.

“There is a bipartisan group of us also trying to figure out ways just to reduce the overall cost for students because the amount of student loan debt that the average student in New Hampshire is carrying means they don’t start up new businesses as quickly,” Hassan said. “It really is having an impact on entrepreneurship in the state and it also means you’re less likely to do things like buy a home at the same time that my generation did for instance. So, we’ve got to think these things through.”