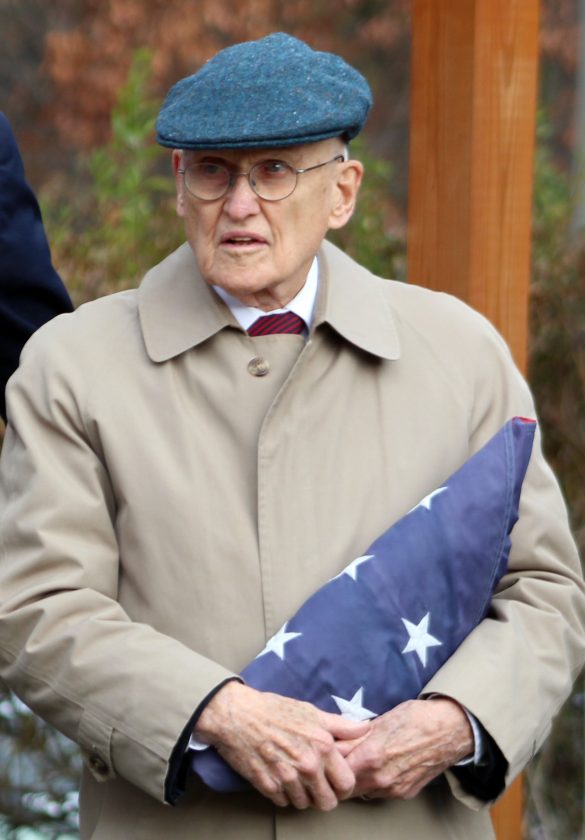 Telegraph photo by DEAN SHALHOUP Holding the American flag he received at Sunday's ceremony in his honor, World War II veteran Thomas McManus listens to one of the speakers who took part in the ceremony that Knights of Columbus Council 13904 and the Immaculate Conception Parish hold each Veterans Day.

NASHUA – On the eve of Veterans Day, a day that also happened to be the 244th birthday of the U.S. Marine Corps, Nashua Knights of Columbus Council 13904 and Immaculate Conception Church parishioners gathered outside the church to pay tribute to fellow Knight and parishioner and World War II veteran Thomas McManus.

McManus, a member “of what many consider to be the Greatest Generation,” according to Past Grand Knight Ron Barnovsky, who led Sunday’s ceremony, stood at attention on the Rosary Walk in front of the East Dunstable Road church as Deacon Christopher Everhart delivered a prayer of gratitude, then presented McManus with the parish’s newly-retired American flag in honor of his service to his country, the Knights of Columbus and his parish.

Honoring a U.S. military veteran with ties to the parish and the Knights council has become an annual affair that takes place on the nearest Sunday to Veterans Day.

Named the Veterans Day Flag Ceremony, it begins about 15 minutes after the conclusion of the church’s 9 a.m. Mass, making it convenient for Mass attendees to take in the ceremony before departing.

But roughly a month before McManus was to report for duty, Barnovsky said the young man “experienced what many families had to experience at that time.

“The cries and screams coming from the house next door told him all that he needed to know,” Barnovsky said. “His good friend ‘Sonny’ would not be coming home … he was killed in action in Europe at age 19.”

McManus would become an electronics technician for the Navy, Barnovsky said. Soon, he and his fellow soldiers across the military branches were in full preparation mode for the planned Allied invasion of Japan.

But the invasion, called “Operation Downfall,” never happened: “By the grace of God, the Japanese surrendered” ahead of the planned invasion, Barnovsky said.

Honorably discharged about a year later, McManus continued his education in electrical engineering, earning bachelors and masters degrees and going to work for the defense industry.

Although McManus just joined the Knights of Columbus three years ago – when he earned first-degree status – Barnovsky said he has since been quite active, “serving in a number of positions,” including his present role as recording secretary.