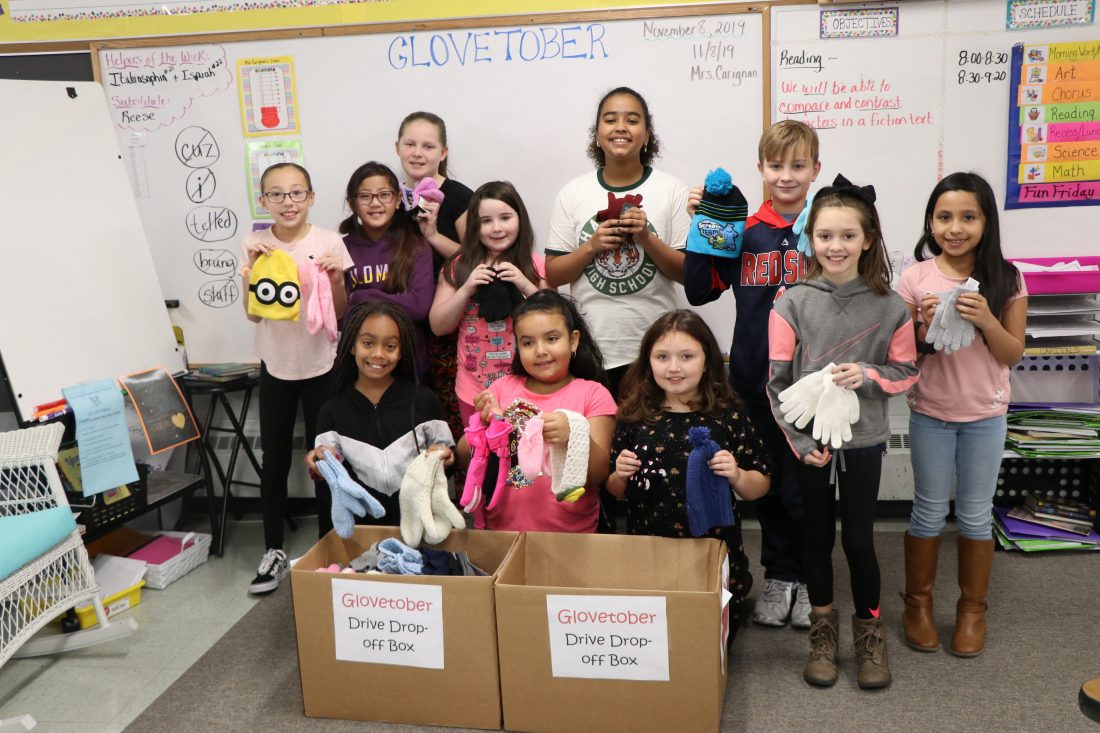 Telegraph photo by GRACE PECCI Dr. Norman W. Crisp Elementary School Student Council members on Friday hold up some of the gloves and hats they have collected during the last month. In total, students from the school collected 119 pairs of gloves, 25 hats and one scarf.

NASHUA – Though most come from low-income families, Dr. Norman W. Crisp Elementary school students and their families put the needs of others needs above their own recently by collecting a total of 119 pairs of gloves, 25 hats and one scarf for the Nashua Soup Kitchen & Shelter.

The movement, known to the students as Glovetober, was spearheaded by members of the school’s student council. Fifth-grade teacher Aimee Carignan said the students began having discussions on helping others at the beginning of the year.

“We talked about how Student Council is many things, so not only is it about being role models and leaders in the school, but it’s also about giving back to the community that gives so much to us as a school,” Carignan said.

Carignan had heard about the Socktober Movement, which she said began several years ago when a young man wanted to help his community. The man found that one of the things local shelters often lack is socks.

As the movement grew, more and more students and schools across the country began participating in Socktober.

Carignan decided to reach out to the soup kitchen and contacted caseworker Juana Fields. Though Fields loved the idea, she said officials were already working with several Socktober drives. Fields said the shelter was genuine need of warm winter gloves, especially those for men and children.

“We talked it over and we decided we would call it Glovetober, and we said, ‘Well, there’s love in Glovetober.’ We tried to have some fun with that. We talked about how having warm hands gives you a warm heart. That was our motto,” Carignan said. “The group made posters and they went on the announcements. We told the students about it. We made flyers that could go home so all the families knew about it.”

For the entire month of October, students collected donations. A majority of the gloves were brand new. Carignan said this activity teaches the students an important lesson.

“Some of our families struggle financially. We were talking about that and that no matter how much we feel like we need, we can always give. That’s really important for the kids to learn,” Carignan said. “Sometimes, you’re on one side and need help and then sometimes you’re on the side where you can give the help and we’re trying to teach them that, both in the community and in the classroom.”

According to Carignan, the program benefits students in more ways than one.

“Not only do the students gain leadership skills and they are learning to brainstorm ideas, but also when they brainstorm these ideas, kids will have these grandiose ideas and then we start to have a conversation and they start to realize the realistic approach of when you have ideas about doing things for your community,” Carignan said. “You know, of course, we would like to have a circus, or have animals come to the school, but we have to talk about what are the repercussions of that, what are the costs of that, is that something we actually can do? I think learning that, that there is more to decision-making than just a good idea, is important.”

“This is wonderful,” Reinke said.

“One of my favorite things is when elementary schools or people working with younger kids reach out to us directly. Many times, we’re not reaching out to younger students or those who might want to participate only because we don’t want to impose, but we find that this seems to be one of our most active donor groups. Families with children, schools, everybody wants to be involved,” Bolton said.