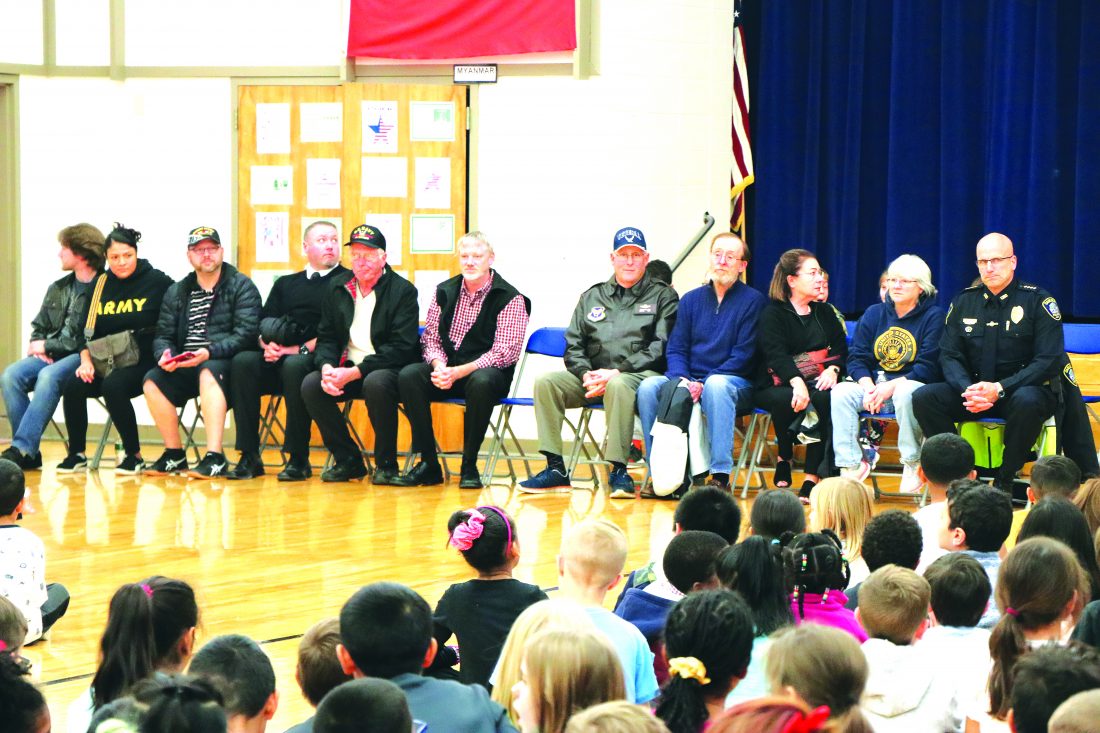 Telegraph photo by GRACE PECCI Officials at Sunset Heights Elementary School honor nearly 20 veterans on Thursday during the annual Veterans Day ceremony. Students were encouraged to invite a veteran to the event.

NASHUA — With Veterans Day quickly approaching, students at Sunset Heights Elementary School have been learning about the importance of those who are being honored during the upcoming holiday.

On Thursday afternoon, students were able to bring in a veteran from their lives to celebrate during their school’s annual ceremony.

Principal Marie Alsup said the school has been hosting this ceremony for years.

“We have a ceremony so that our students can recognize that veterans are real people in their communities and in their lives and that’s why we have the day off on Monday,” Alsup said.

While it serves as a learning opportunity for the students, veterans also get to benefit from the visit.

“The veterans always appreciate it that we’re recognizing them and letting the kids know what veterans do and why they are so important,” Alsup said.

The veterans were welcomed Thursday afternoon with coffee and cookies, before making their way through the school’s gymnasium.

Students of all grades chanted “U-S-A” while waving American flags and cheering on the group of nearly 20 veterans who made their way to their seats.

During the ceremony, each veteran was asked to stand up and introduce themselves, while also sharing their branch of service and who invited them.

Parents, grandparents, uncles, cousins and even a mailman of Sunset Heights Elementary School students made up the group and represented all branches of the armed forces.

Alsup said the students have been learning about veterans by reading America’s White Table By Margot Theis Raven.

The table is set in the story to honor those who have served in the armed forces, as well as those who are missing and those who were prisoners of war. In the story, the small table is set with a white cloth, a lemon slice, grains of salt, an empty chair, a black napkin, a glass turned over, a white candle and a red rose in a vase tied with a red ribbon.

Aside from having all students read the book, Alsup said the school also has its own white table set up in the lobby, as well as decorations.

During the ceremony Thursday afternoon, students sang “The Star-Spangled Banner” and several other songs. Several students also shared poems and messages of gratitude for all of the veterans who were in attendance.

All schools and offices in the Nashua School District will be closed Monday to observe Veterans Day.