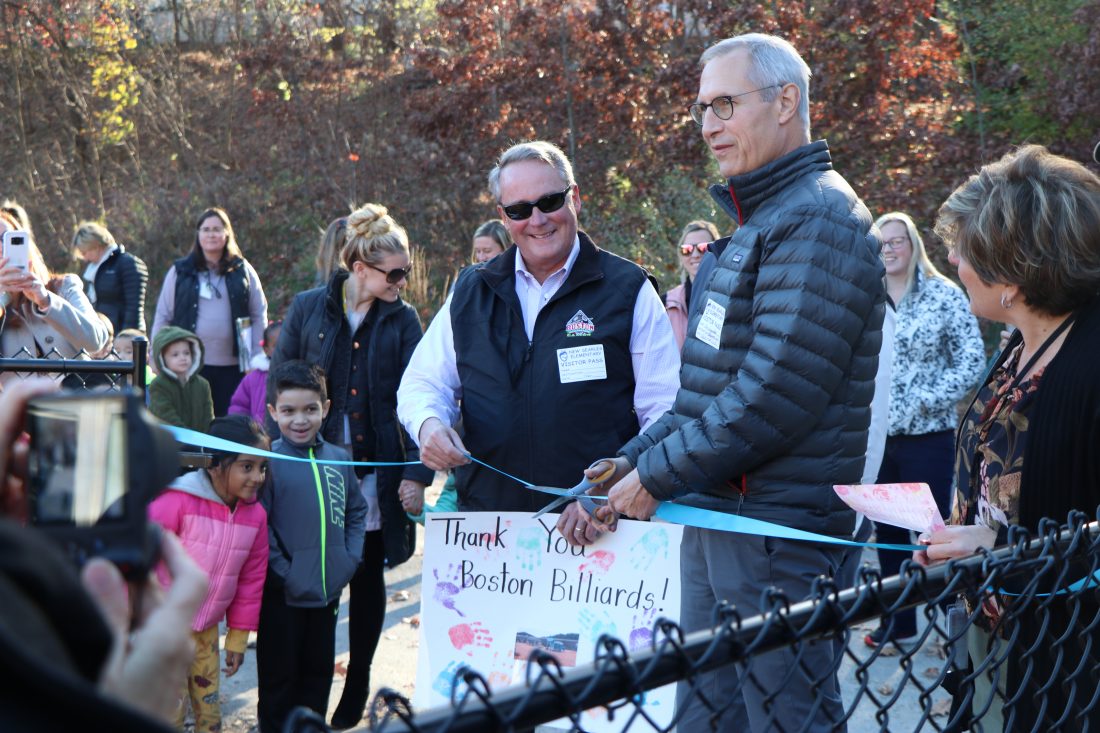 The playground was built as a result of funding from Boston Billiard Club & Casino as well as funding and building from volunteers and Eagle Scout and Nashua High School South junior Connor Leuci.

Both Boston Billiard and Leuci have provided different structures for the playground.

Leuci, who went through the school’s sensory program back when he attended New Searles Elementary School, said, one of the tasks that is required of Eagle Scouts is to give back to the community.

Leuci said when he first began his project, the playground was of low quality, with a lot of plastic tikes playground equipment.

“I wanted to help New Searles improve the playground and help give an extra space for the kids to have fun,” Leuci said.

Leuci met with both the Board of Education and its Finance and Operations Committee, where he received unanimous approval. He also conducted a fundraiser in May in Nashua High School South that encompassed a musical cabaret and deserts.

From this fundraiser alone, Leuci was able to raise about $2,400. With additional donations, Leuci had a total of $3,000 for the project.

Leuci was able to watch his efforts come together Wednesday afternoon as the young students explored their new playground.

“It warms my heart seeing all these kids smiling and have fun here,” Leuci said. He expressed gratitude for the volunteers as well as New Searles Elementary School for allowing him the privilege of completing this project.

As for Boston Billiard Club, the club donates 35% of all gaming proceeds to a nonprofit. Director of Events and Partnerships Gia Bonilla said back in August, members of New Searles Elementary School’s parent teacher organization were able to benefit for a week. In total, Boston Billiard Club donated nearly $35,000 toward the project.

Bonilla said in the future, Boston Billiard Club will be rotating through all Nashua PTOs to help fund projects that are not supported in the school’s budget.

“We’re grateful they invited us to see the playground. It’s wonderful for us to see the funds being used in this way,” Bonilla said.

The school’s playground was something Principal Helayne Talbott, who has been with the school for the last year, wanted to address immediately.

When she asked about it, Talbott said she was informed that the school had been told for years it couldn’t have a playground behind the school because of drainage issues.

With help from her brother-in-law, Talbott learned that they could in fact have a playground. This playground will benefit the students in more ways than one.

“Fifty percent of the group is special needs students… so there is some sensory equipment, a shaded place. I think the students will be able to get exercise and gross motor and fine motor skills,” Talbott said.

Talbott noted that the school has a larger playground, but the preschoolers are too small for it. Talbott said the school is very thankful for the efforts of both Leuci and Boston Billiard Club.