Service planned for 2 found in barrels decades ago 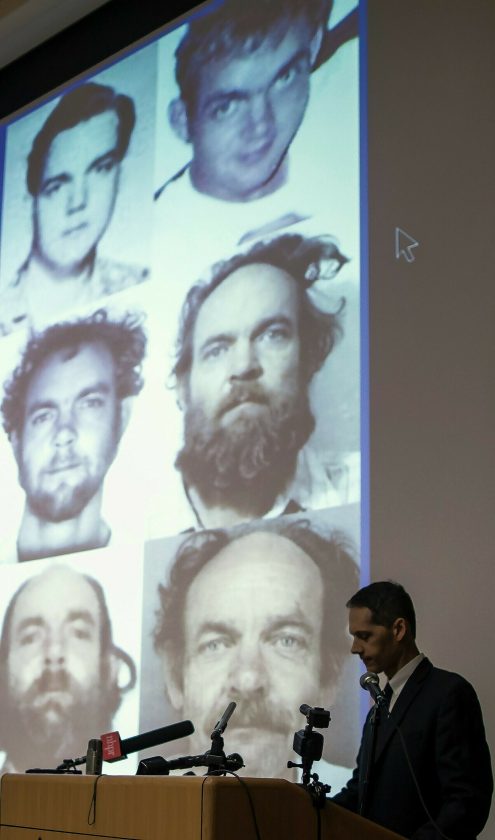 FILE -- In this Thursday, June 6, 2019 file photo New Hampshire Senior Assistant Attorney General Jeffery Strelzin stands in front of projected photos of convicted killer Terry Peder Rasmussen during a news conference at the Department of Safety, in Concord, N.H. A graveside service is planned in New Hampshire, Saturday, Nov. 9, 2019, for Marlyse Honeychurch, 24, and 6-year-old Marie Vaughn, two suspected victims of Rasmussen who were identified decades after their remains were discovered in a barrel in 1985. Authorities believe Rasmussen, who died in a California prison in 2010, is responsible for the deaths. (Michael Pezone/The Concord Monitor via AP, File)

ALLENSTOWN (AP) — A graveside service is planned in New Hampshire for two suspected victims of a serial killer who were identified decades after their remains were discovered in a barrel in 1985.

A public service is scheduled Saturday for Marlyse Honeychurch, 24, and 6-year-old daughter Marie Vaughn. They were buried in an Allenstown cemetery with a headstone that said they were known “only to God.”

Authorities found a total of four decomposed bodies. This year, they confirmed the identities of Honeychurch, Vaughn, and 1-year-old Sarah Lynn McWaters, another daughter of Honeychurch. The fourth, a little girl, remains unidentified.

McWaters will be laid to rest closer to their families, who live across the country. They asked the community to turn out for the 2 p.m. service at Saint John the Baptist Cemetery. The families said in a statement they “are grateful to the residents of Allenstown who never ceased in their compassion, thoughts and prayers for these young women.”

Matt Roan, director of the Petit-Roan Funeral Home in Pembroke, which is assisting with the arrangements, told WMUR-TV that Honeychurch and her daughters are “getting the love that they deserved, and that they obviously didn’t have before.”

The unidentified girl isn’t believed to be related to the other three. Authorities believe serial killer Terry Rasmussen is responsible for all four deaths and that the girl is his daughter. Rasmussen died in a California prison in 2010.

When they were found inside the barrels in a forest near Bear Brook State Park, authorities said the remains of the four were too decomposed to be identified. All they could say was that the four were murdered.

The National Center for Missing and Exploited Children produced facial reconstruction of all four. Authorities then turned to DNA testing, determining that Rasmussen was the father of the unidentified victim.

Prospects for identifying the four improved greatly in 2017, when authorities identified the suspected killer as Rasmussen and the case drew renewed attention.

From there, they got help from a librarian from Connecticut who focuses on missing persons and had listened to a podcast about the case on New Hampshire Public Radio. She remembered an earlier posting about the missing Sarah McWaters on an ancestry site and reached out to the person who had posted it. That led to the confirmation that Honeychurch and her children were last seen with Rasmussen at her mother’s on Thanksgiving in 1978.

Holly Sears, a resident of Allenstown, feels the family’s pain, and now, sense of relief.

“I really think it’s important that people show up to show their support and show that we care,” Sears said of the graveside service.