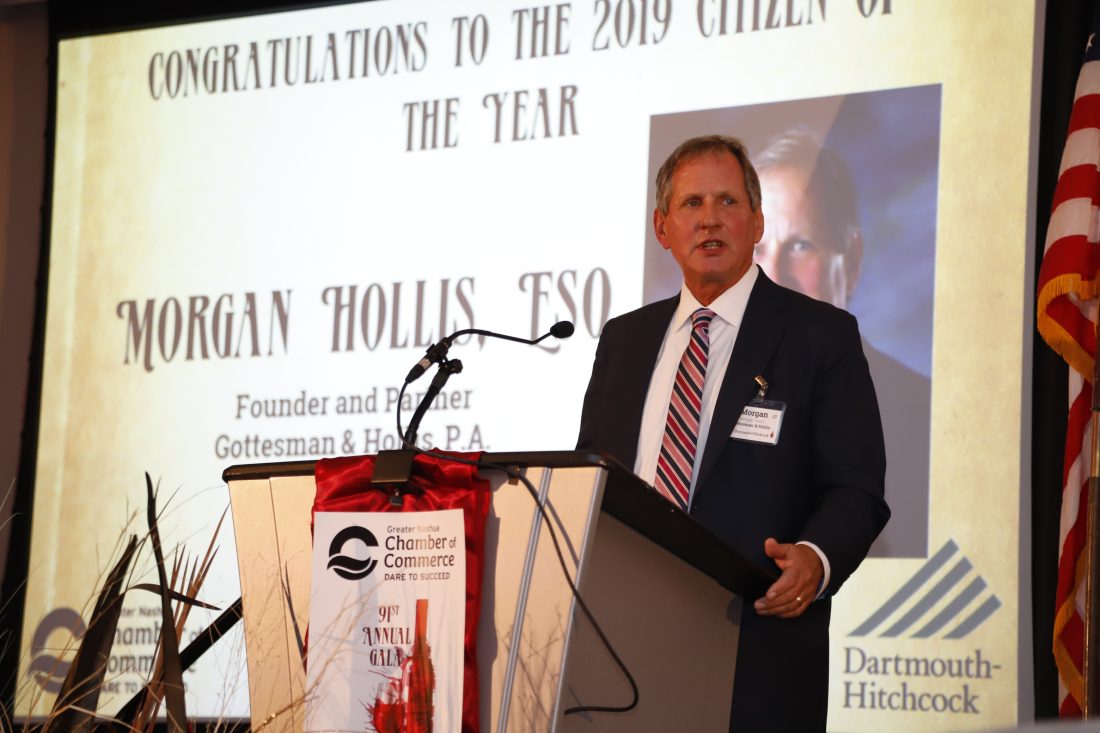 When asked how to describe the 2019 Greater Nashua Chamber of Commerce Citizen of the Year Morgan Hollis, these were the words chosen by David Gottesman, his law firm partner, friend and “almost brother.”

Upon introducing Hollis, Gottesman also described him as a “mild mannered” and “patient” man of high integrity. “One of his greatest talents is his ability to communicate, and what I’ve learned is part of communicating is being a good listener, and he is that,” Gottesman said.

Hollis was recognized by Gottesman for his extraordinary service within the community.

“(Hollis) has served as a board member or chair of almost every major organization in this community,” Gottesman said. “The Nashua YMCA, The Greater Nashua Chamber of Commerce, the United Way of Greater Nashua, Nashua Red Cross, Nashua Charitable Foundation, Downtown Development Corp., the ice skating center, Big Brothers and Big Sisters, Edgewood Cemetery, First Church, Appalachian Mountain Club, Daniel Webster Council, Nature Conservancy… and he did it all for the right reasons.”

Gottesman added, “Morgan is truly someone I would call a good scout. It’s so fitting for Morgan to receive this award. I’m truly honored to be his friend, his partner (and) almost his brother.”

During the gala, Hollis was surprised with a video that several of his friends, business associates and chamber officials created.

YMCA of Greater Nashua CEO Mike LaChance, who met Hollis in the 1990s, said as a “newbie” to the community, he was intimidated to reach out to Hollis, who was such a well-known figure.

“Right away, you could tell he was a very personable individual and it took that intimidation factor right away,” LaChance said.

Scontsas Jewelry Owner Philip Scontsas described Hollis as a “mild-mannered, intelligent gentleman who is always there to help in a way which is unassuming and thoughtful and kind.”

Persian Rug Gallery owner Sy Mahfuz said of Hollis, “The legacy really is about family, about being a great father, great husband, great son, great friend, a great grandfather. And Morgan is all of those things. So when I sit here and I speak on behalf of my friend, I realize that his legacy is so much deeper and something that I value in terms of our friendship.”

After being called up to the stage, Hollis gave the audience a call to action:

His final message of the evening was, “See something in your community and do something.”

“Don’t just see something, learn about it …Get involved,” Hollis said.