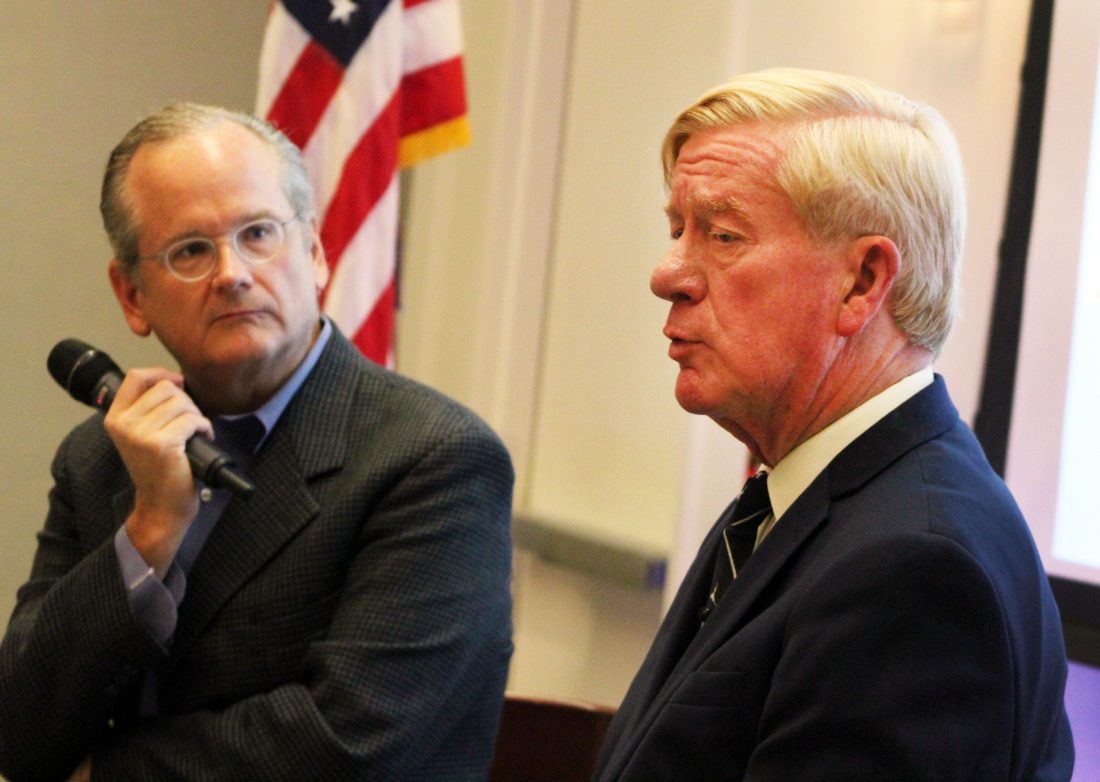 “Ralph Nader really did tip the 2000 election,” Weld said, pointing out that many of the votes Nader drew “would certainly have gone to Al Gore” had ranked choice voting been in effect at the time.

Weld, who said he “campaigned long and hard” in Maine for ranked choice voting ahead of the 2016 election, when he ran on the Libertarian ticket, addressed that issue and numerous other topics during Sunday’s town hall-style meeting hosted by Open Democracy NH and Equal Citizens.

The meeting was part of a series of Democracy Town Halls in which presidential primary candidates answer both prepared and audience-submitted questions about their stances on the issues.

Weld, a popular, two-term Massachusetts governor known as a fiscal conservative and a social moderate, is one of three “notable” GOP candidates who plan to challenge President Trump in the 2020 Republican primary.

Although the names of a dozen or so Republicans have been mentioned as possible primary contenders, Weld, along with former South Carolina Gov. Mark Sanford and former U.S. Congressman Joe Walsh of Illinois, are considered the top three Trump challengers.

The purpose of the Democracy Town Halls “is to focus on issues of democracy … we’ve been looking at all the candidates and rating them,” said Harvard Law School professor Lawrence Lessig III, who moderated Sunday’s event.

Several of the 60 or so attendees were heard saying “yes” when Weld addressed the controversial subject of gerrymandering.

“We should have independent commissions drawing the lines,” he said to audible approval. “I think having commissions is superior than having (redistricting) decided judicially.”

On the electoral college, a system that has come under fire at times over the years, Weld said that while “I haven’t come out saying the whole electoral college should be abolished,” neither would he be in favor of “direct popular election of the president … because then, candidates would only go to New York or California” and other high-population states.

“Nobody would go to states like Montana,” he added.

Asked his stance on the growing controversy over voter suppression issues, Weld was critical of his own party for its alleged involvement in suppressing the vote.

“The current Republican party is famous for its efforts in voter suppression … in areas that have a substantial minority population. It’s shameful,” he said.

He cited in particular New Hampshire’s new “residency bill,” the highly controversial legislation that requires anyone who votes in New Hampshire to have a New Hampshire drivers license, and must have their vehicles registered in the state.

Weld said he sees the legislation as an attempt to make it more difficult for college-age residents – who statistically favor Democratic candidates – to vote in New Hampshire.

On the subject of the so-called millennial generation, Weld said that when addressing them, and many of their slightly older “Gen Xers,” he focuses in large part on convincing them to get out and vote.

“My pitch to them is two of my top issues – not having a trillion-dollar deficit every year, and climate change … I tell those younger voters (they) will never see Social Security (benefits) if this keeps up,” Weld said.

“And the same with climate change. They will get the severe storms … it’s the younger people who will bear the brunt” of the effects of climate change.

But most important, Weld told Sunday’s audience, is getting out the vote.

“The last election, at the presidential level, 49 percent of (eligible) millennials voted,” he said, referring to 2016.

“If that figure (rises) to 65 percent in 2020, Donald Trump would not win a single primary in the United States.”