Driver accused of striking and killing Nashua man is jailed 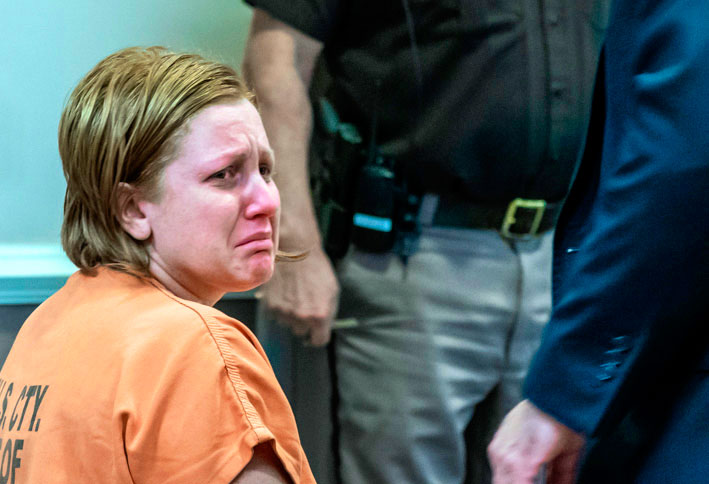 Photo by Jeffrey Hastings An emotional Sarah E. Shaw glances toward friends and family members who attended her Superior Court bail hearing Monday on the negligent homicide charge that accuses her of striking and killing a man on the Everett Turnpike late Saturday night.

NASHUA – The death late Saturday night of Nashua resident Osman Konda, who was struck and killed by an alleged drunk driver on the Everett Turnpike, is “a tragedy … an accident, with no intent,” an attorney for Sarah E. Shaw told a hushed courtroom Monday afternoon.

Shaw, 36, of 97 Blossom St., is facing a felony charge of negligent homicide that accuses her of being under the influence of alcohol or other substances when the car she was driving struck Konda as he stood outside his disabled vehicle.

Tears were shed frequently on both sides of the courtroom throughout Shaw’s bail hearing, a roughly 20-minute proceeding during which the prosecutor, Assistant County Attorney Brett Harpster, asked Judge Jacalyn Colburn to house Shaw on preventive detention.

Attorney Timothy Goulden, who represented Shaw with attorney Robert Johnson III, requested Shaw be released on personal recognizance bail – or if not, that bail be set at $5,000 cash or surety.

Colburn ultimately granted Harpster’s recommendation of preventive detention, based on his argument that Shaw, despite the fact she has no criminal history, presents a danger to the community.

“While we don’t have the results of the blood tests, I have to find you a danger based on what is reported here,” Colburn said, referring to the blood samples taken from Shaw after her arrest.

“Obviously, this is a tragedy, both for the family of the decedent and your family,” Colburn told Shaw. Colburn said if Shaw requests, and is granted, an evidentiary hearing, she would “be willing to address bail” at that time.

Konda, 53, was pronounced dead at the scene, shortly after police, firefighters and ambulance personnel found him lying on the side of the turnpike suffering from “significant trauma” that police said “resulted in his death.”

While speaking with Shaw, who was sitting in an ambulance being evaluated by medical personnel, police said officers detected “an odor of alcohol,” and alleged Shaw exhibited “glassy, bloodshot eyes” and “slurred speech,” and had “a dazed look on her face,” according to police reports.

Shaw allegedly told officers she was returning from a wedding, where she said she had “three drinks with tequila.”

Police asked her if she saw any vehicles in the breakdown lane, to which she replied she did not, according to the reports.

Shaw did agree to field sobriety tests, but police said she didn’t do well and was placed under arrest.

She said she didn’t see any vehicles in the breakdown lane, police said.