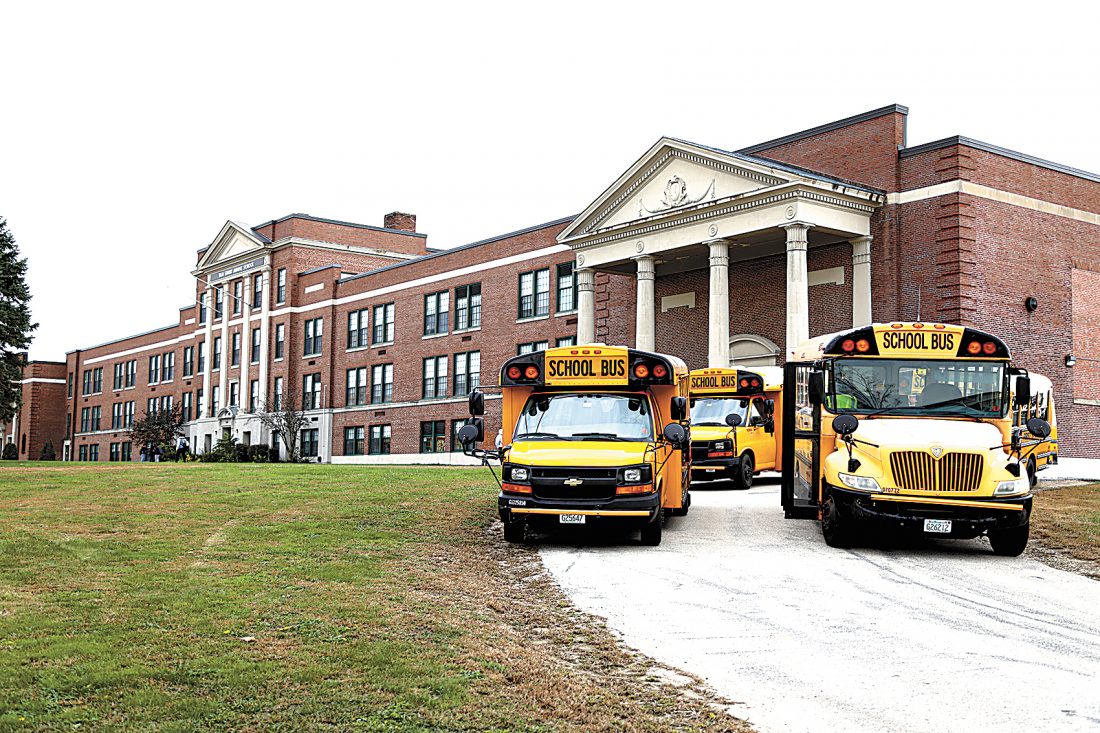 NASHUA – The buildings serving as middle schools in the Nashua School District – Elm Street, Fairgrounds and Pennechuck – are all in need of repairs and upgrades to meet today’s state and federal standards for education, safety and security.

After lengthy data analysis and a feasibility study done for the Middle School Renovation Project by the Joint Special School Building Committee, early numbers suggest a new building would be more cost effective than a renovation.

With the cost of a new school estimated at $78.1 million compared to $95.5 million to renovate Elm Street Middle School, Richard Dowd, the chairman of the committee, pointed out that the length of time it would take to complete a renovation project as well as the reality that such an endeavor would still not bring the school up to code makes a new school seem more plausible.

Having a middle school model that is team oriented and allows for group exercises and collaboration, Dowd said the 84-year-old building that serves as Elm Street Middle School – while it is attempting to meet standards – is struggling to do so because of the design of the building.

“The middle school concept today, there is more areas where kids can collaborate with other kids and do activities,” Dowd said. “They transition them from what you would have in elementary school to high school as you go through grades sixth, seventh and eighth.”

“From a physical, structural stand point, it doesn’t lend itself to the team concept of teaching, segregating the three classes,” he added.

During the analysis, which is only Phase I of the project, a total estimated cost to revamp the middle school system would range from $114.8 million to build a new school while upgrading Fairgrounds and Pennechuck, to $132.1 to renovate Elm Street while addressing some thing at the other two schools.

Dowd said those figures are not final numbers and are the high side of estimates being taken from the analysis.

The reasons laid out in the study showcase the need to treat a lot of structural issues within the school, including the presence of asbestos in both the floors, as well as a large portion of that floor being made of wood that is three and a half inches thick.

“Being an 84-year-old building, there’s a lot of mitigation that has to take place because of things that you shouldn’t have in schools,” Dowd said. “We found that around 60 percent of the floor is three and a half inches of wood, with thick sheets of asbestos underneath it, neither one conducive of a school. All the flooring has the mastic on the flooring and 90% of the flooring has asbestos in it.”

Dowd also referenced the classroom sizes and the need for a special education and English Language Learn specific rooms – as the ELL program is currently being housed in an old music room at Elm Street – as well as the surprising use of closets as meeting rooms for students as examples of space inadequacies at the school.

With that being the case, as well as the poor parking situation and the lack of athletic fields, Dowd said it is looking as though building a new school, where those issue would take two years as opposed to four years to address at a lower cost, would be a more effective way to go.

With the renovations to Pennechuck and Fairgrounds estimated to cost $12.1 million and $24.5 million respectively, there are definite needs to be addressed with both schools. While Fairgrounds has the least amount of needs in terms infrastructure, Pennechuck would need 10 new classrooms to replace the portable classrooms that have outlived their purpose, while also being a security risks.

“Pennechuck has portables which have reached their life expectancy,” Dowd said. “And, they are security issues based on the Homeland Security guidelines, because students have to transfer back and forth outside the security perimeter of the main school, and that’s risky.”

With the data analysis complete, Dowd said the next step is to bring the report to the Board of Education prior to the Joint Special School Building Committee decision and a recommendation to the Board of Aldermen.

On Oct. 24 there will be a public hearing at 7:45 p.m. at Nashua High School North, where the committee will listen to the public’s input on the topic.