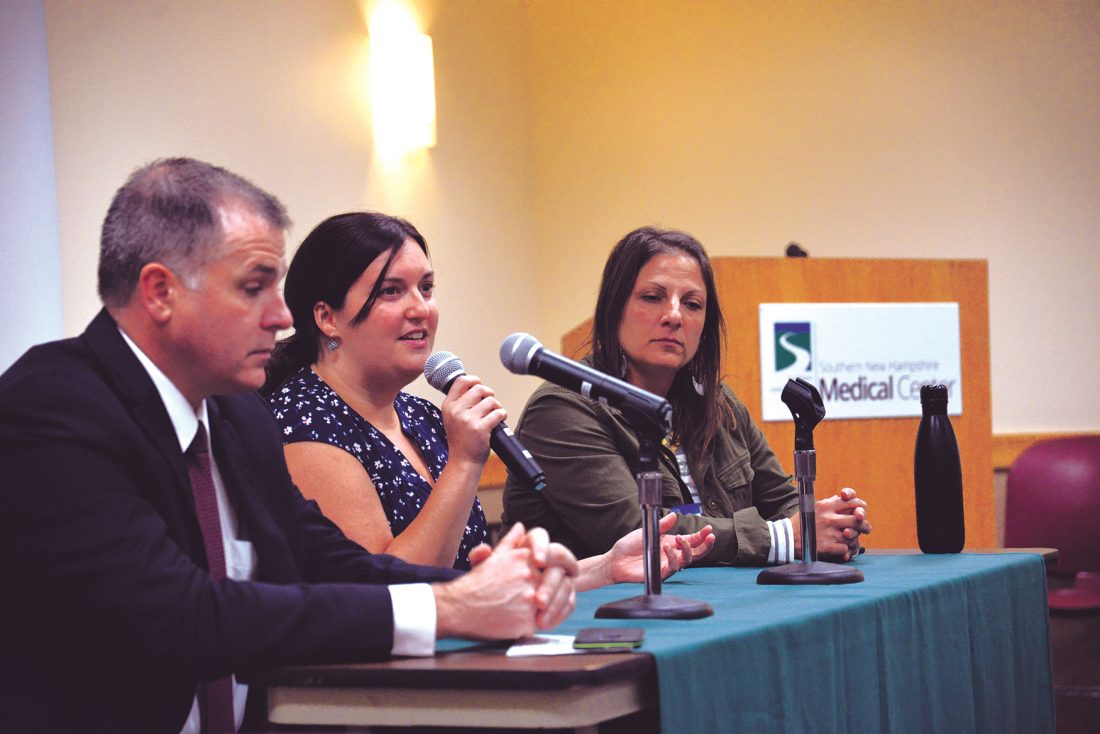 NASHUA – Human trafficking extends its reach across the country, and New Hampshire is no different, with individuals trapped within the grip of this global industry, which is estimated to be worth $150 billion worldwide.

Whether it’s for sex or labor, human trafficking is a low-risk criminal enterprise with a high pay off, especially when compared to other illicit, for-profit activities, like drug dealing for example.

A community conversation and informational meeting about human trafficking was hosted at Southern New Hampshire Health Wednesday, where various stakeholders came together to learn what part they play in combating the issue. The meeting was organized by a Nashua subgroup of the New Hampshire Human TraffickingCollaborative Task Force, and featured informational slides, a panel discussion and table conversations. In addition, there was representation from Truckers Against Trafficking with their mobile classroom in the back of an 18-wheeler trailer that people could tour after the discussion.

“Human trafficking is one of the greatest human rights violations of our time,” Systems Administrator with TAT Susan Dold said. “This is modern-day slavery. We think of slavery as being nonesistent since the abolision of slavery, but the reality is that there is more slaves today than at anytime in history. So, we need to just mobilize around this, and it’s an everywhere problem with an anyone solution, and we just all need to work together to end it.”

She said there is 40 million people trapped in this modern-day form of slavery, whether that be labor or sex trafficking, including child soldiers overseas. However, in the United States, she said the number of people being trafficked is rounded to 200,000 people, although since these activities are hidden away in the shadows, it is not something easily tracked. Nonetheless, it is known that human trafficking is happening in every sector of soceity. Since TAT was founded in 2009, more than 2,300 calls have been made into the National Human Trafficking Hotline, which is 888-373-7888.

Human trafficking occurs when a person is compelled to provide labor or a service, or to perform a commercial sex act by force, fraud or coercion. Commercial means something of value is exchanged, whether that be food, shelter, clothing or, often times, drugs. In addition, a commercial sex act can also include pornograpghy. Examples of force include physical violence, the use of restraints and even drugs. Fraud on the other hand deals with tactics such as deception, such as false promises about the terms and conditions of employment, wages or eduction opportunities. Lastly, coercion deals with psychological threats, blackmail and manipulation, which can keep a victim second guessing themselves.

Labor trafficking is often hidden within a legitimate business, such as nannying, landscaping or cleaning crews to name a few. As far as sex trafficking, this can occur on the streets or in hotels.

“Traffickers are very good at what they do,” Executive Director at Real Life Giving Donna Plourde said. “They know who to target and where, and they’re looking for certain vulnerabilities, and some of that might be runaway missing youth. It might be individuals who have experienced abuse in their background.”

She said it is very common for a victim to have had physical, sexual or emotional abuse in their background, as well as substance use. In addition, other vulnerabilities include language and cultural barries that can be manipulated.

“The International Labor Organization, in 2017, their latest figures estimate that it’s a $150 billion industry worldwide, and it’s one of those situations where it’s very, very high profit and very low risk,” Plourde said. “It’s still pretty easy to stay under the radar.”

For example, when someone sells drugs, they have to get more to sell them again. When a person is a human sex trafficker, or a pimp, they can sell a victim over and over again. She said this is one of the fastest growing criminal enterprises in the world today.

Moreover, in terms of what is happening here in New Hampshire, Plourde said examples in labor cases have been identified in every county of the state, not just the urban areas. Many of the cases have popped up around the state’s highways, such as Interstate 95 and Interstate 93.

Mike Posanka with the U.S. Department of Homeland Security said one of the first cases nationwide that was prosecuted for labor trafficking occurred in New Hampshire. He thinks the human trafficking issue has plateued in the state.

“Both sex and labor trafficking have always been present in New Hampshire, but the opioid epedemic has really exacerbated the sex trafficking activity, because that’s the vulnerability,” Posanka said.

He said that predominantly, the victims in New Hampshire are addicted to heroin and fentanyl, and that addiction is what is driving their activity. He said law enforcement is doing their best to address the situation across the state, but that these cases are often anchored in cities like Nashua, Manchester and Portsmouth.

He also said law enforcement also has addressed illicit massage businesses throughout the state, which may be in the aforementioned cities, but also other towns, such as Salem.

Jasmine Grace, of Nashua, was once caught in the cycle of sex trafficking, but has since been clean and sober, off the streets and out of that life for 12 years. She is a human sex trafficking survivor from Revere, Massachusetts, and shared some of her background during the panel discussion, explaining how her trafficker was a drug dealer who was raised in Boston. She said traffickers are taught the rules of the game by other pimps or traffickers, sometimes being handed down from an uncle or a cousin, or even being learned on the streets.

Project Director for the New Hampshire Human Trafficking Collaborative Task Force Rebecca Ayling said they have received quite a few referals from this area from people who have experienced trafficking and are now looking for services after being out of that life to help deal with the trauma and impacts on their mental and physical health.

“One of the things we really identified as a statewide need is just natural supports and relationships,” Ayling said.

She aims to diversify their response and help people steer clear from returning to those areas of exploitation, or entering back into new kinds of abusive relationships. Moreover, after hearing from the speakers, attendees had a half hour to talk amongst themselves while sitting together in groups. A scribe was selected among each group to take notes on their conversations, which were then shared aloud. The conversations revolved around keeping Nashua safe from trafficking and the hope is that this is not a one-and-done event.

The notes shared at the end will assist the task force in putting together a report based on everyone’s comments. In any event, anyone, at any age, of any gender can be trafficked, and those who gathered together Wednesday learned some new tools to take with them moving forward in order to recognize the signs and understand the different ways traffickers target their victims.