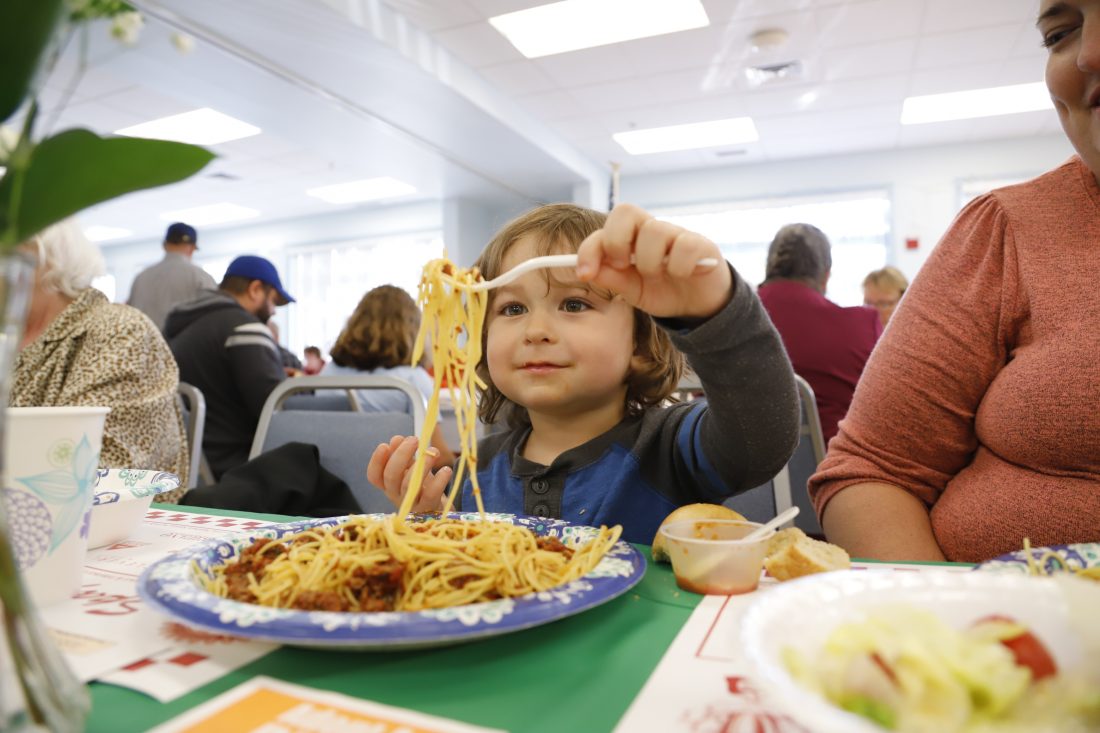 NASHUA — With classic Italian music emanating throughout the room, and the aromas of pasta sauce and spaghetti filling the air of the Nashua Senior Activity Center, members of the community came together to partake in the 46th Annual Spaghetti City dinner.

While the event went off without a hitch, there was plenty of drama during the organizational phase of the yearly Italian feast, with the sale of the Crowne Plaza to the DoubleTree, organizers said they almost had to sink some of the funds raised for the event into buying the sauce.

“They provided the sauce for the Spaghetti City for at least the last 25 years,” said club member and former president Kimberly Reagan, “but with the sale to the DoubleTree, we didn’t know where we were going to get the sauce this year. We almost started to panic.”

The day, and meal, was saved by Valicenti Pasta Farm, who Reagan said donated all the sauce needed to run the event, saving the nonprofit money that they can put toward their charitable efforts.

“Valicenti actually stepped in and they’re making all 25 gallons that we need of their Italian gravy for the dinner tonight,” she said. “They basically saved our gravy and we’re very appreciative of that.” “That would have been over $1,000 in sauce that he has given to us,” Reagan added, “that would have taken away from the money we raised for this event.”

The owners and employees of Valicenti, which is based locally, in neighboring Hollis, were more than happy to oblige, seeing as they regularly help out members of the community, like schools and organizations that come to them for special events.

“We just finalized this on Thursday for today,” said Matthew Pynn, the sales manager for Valicenti. “So it was less than a week’s time when we turned around and did it.”

“We make a batch of red gravy every Monday morning anyways so we just gave it to them right out of the vat,” he said. “We like to help out; it’s simple enough for us to do it.”

Young and old alike came to the senior center to enjoy the meal, which raises funds for all the charitable efforts that Rotary West contributes to, including The Senior Center, Marguerites Place, the Nashua Soup Kitchen & Shelter the Senior Center as well as the nonprofits scholarship program.

Throughout the evening, guests participated in tasting the yearly sauce competition for the Paisano Cup, which pitted the Italian gravy-making skills of the three local Rotary Clubs–those of Nashua, Nashua West, and Milford–against one another.

With 115 votes, Rotary West once again took the Paisano Cup for the top sauce, thoroughly beating out both Nashua and Milford–who had 49 and 40 votes respectively–defending their title and keeping the trophy for another year.