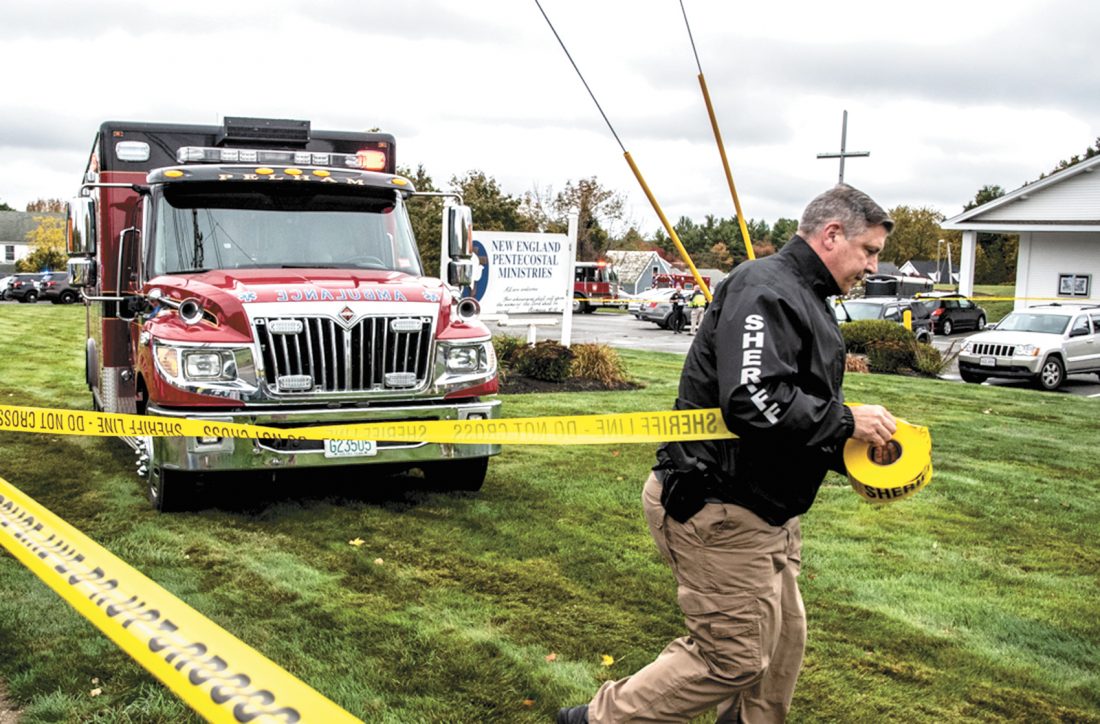 PELHAM – In the midst of a wedding ceremony Saturday morning, approximately 40 guest at New England Pentecostal Church at 955 Bridge St. were confronted with an active-shooter situation that ended with two individuals shot and one suspect in custody.

At 10:12 a.m., the Pelham Police Department responded to a call of an active shooter at the church, during which the suspect, Dale Holloway, allegedly arrived during a wedding ceremony and shot Bishop Stanley Choate in the upper chest and Claire McMullen, 60, in the arm before being apprehended by wedding guests.

“Responding officers arrived within three minutes of the call. Upon arrival, a wedding was occurring at the church and the police officers discovered a suspected shooter being detained and subdued by the guests of the wedding,” said Pelham Police Chief Joseph Roark during a press conference following the shooting. “They placed that individual into custody and arrested him.”

Choate was taken to Tufts Medical Center in Boston, and is listed in serious condition.

McMullen was taken to a local hospital and is listed in good condition.

In addition to the Choate and McMullen’s injuries, another parishioner sustained injuries during the incident, as Mark Castiglione, 60, received a minor injury after being struck in the head with an object. He was treated at a local hospital and has since been released.

During the incident, Roark said standard active-shooting response was a key in the apprehension of the suspected shooter, and that the Pelham Police Department has within the last year held active shooter training at the church.

“From my understanding, they basically gang tackled him. A struggle ensued, minor injuries occurred to the other guest who were in the struggle with the shooter,” Roark said.

“I do know that our agency provided active shooter training to that church within the last year,” he added.

When asked about how the guests responded, Roark said their methods were along the lines with how people are trained to react to active shooter situations.

“I think that is a standard that is being taught now is to address the threat,” he said.

After being subdued by the wedding party, and taken into custody, Holloway was arrested on alternative counts of purposely and knowingly causing bodily injury by means of a deadly weapon. He is being held awaiting arraignment, which is anticipated to be scheduled for 1 p.m. Tuesday in Hillsborough County Superior Court South.

Had the wedding not been interrupted, there was a scheduled memorial service later on Saturday to celebrate the life of New England Pentecostal Ministries Pastor Luis Garcia, who was shot and killed earlier this month in Londonderry.

There was no indication if that murder had any connection to Saturday’s shooting, and with the shooting still under investigation, Roark declined to comment.

The church is rooted in the Nashua-based Church of God in Christ, a congregation founded decades ago by the late Bishop Estee Newman.

It was renamed New England Pentecostal Ministries in 1984, and in July 1987, the congregation dedicated the new church building at 327 Gage Hill Road, the address that later became 955 Bridge St.

Choate and his wife, Ruth, a pastor and the daughter of Bishop Newman, have led the church since then.

During the situation, Pelham’s Police Department was assisted in town by Salem and Windham’s police departments, as well as the Hillsborough County Sheriffs Office, New Hampshire State Police and the Alcohol, Tobacco & Firearms Office. They also received mutual aide from Dracut and Tyngsborough police departments, securing the southern border, while Salem, Londonderry and Windham assisted with ambulances on the scene.

The shooting is currently being investigated by the state Attorney General’s office, the Pelham Police Department and the Major Crime Unit of the New Hampshire State Police.

Officials said that according to the preliminary investigation, the shooting does not appear to be a random act.

“This does not seem to be a random event at this point,” Roark said. “At least that is what our preliminary investigation is telling us.”