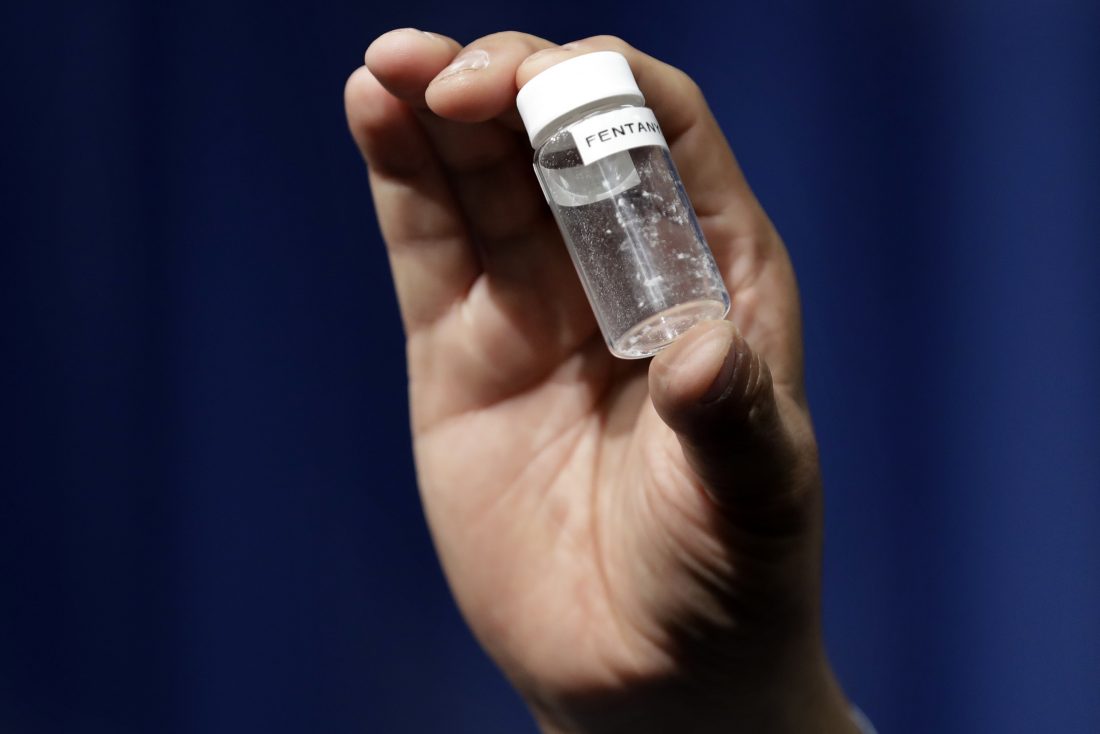 FILE - In this June 6, 2017 file photo, an example of the amount of fentanyl that can be deadly after a news conference about deaths from fentanyl exposure, at DEA Headquarters in Arlington Va. The Justice Department’s inspector general says the Drug Enforcement Administration was “slow to respond” as America grappled with a rising opioid epidemic. The watchdog released a report Tuesday examining the agency’s regulatory and enforcement efforts to control opioids. (AP Photo/Jacquelyn Martin, File)

NASHUA – As people in New Hampshire continue to suffer from deadly fentanyl and other opioids, authorities believe they severed part of the supply chain with this week’s guilty plea by Sergio Martinez, 29, of Lawrence, Massachusetts.

U.S. Attorney Scott Murray on Wednesday said Martinez pleaded guilty to leading a “continuing criminal enterprise,” while entering an agreement with the government that, if accepted by a federal judge, would impose a 45-year prison sentence. It would also require Martinez to forfeit $2 million in cash, as well as three houses in Lawrence.

“DEA is committed to investigating and dismantling large scale drug trafficking organizations like this one operating in Lawrence, Massachusetts, led by Mr. Martinez,” Drug Enforcement Administration Special Agent in Charge Brian Boyle said. “Fentanyl distribution destroys people’s lives and wreaks havoc in our communities. DEA and our law enforcement partners will aggressively pursue any individual or organization that distributes this poison.”

In addition to fentanyl, examples of opioids include:

According to the DEA, fentanyl is up to 100 times stronger than morphine. Its street names include China Girl, China White, Dance Fever, Great Bear and Poison, among others.

In fact, Murray said that in intercepted telephone calls played at trial, Martinez said of fentanyl, “what we give out is poison.”

“The evidence in this case demonstrates that Lawrence-based fentanyl traffickers have made huge profits from pumping large quantities of deadly fentanyl into New Hampshire,” Murray said. “Mr. Martinez ran a sophisticated marketing operation that served as a conduit between the Mexican drug cartels and customers in Northern New England.”

During the trial, which began on Oct. 1, Murray said the government presented evidence that Martinez operated a fentanyl trafficking operation that employed numerous individuals to sell fentanyl to customers from various New England states, including New Hampshire. Testimony at trial showed that customers knew the Martinez organization by the name “Brian” and that most of the organization’s customers came from New Hampshire. Distributors knew to identify customers on the streets of Lawrence by their New Hampshire license plates.

Distributors testified at trial that they sometimes had lines of 10 to 15 customers, most with New Hampshire license plates, waiting for them on the street.

A total of 34 individuals were charged with participating in this conspiracy. Martinez is the last of various co-conspirators to plead guilty. Martinez is scheduled to be sentenced on Jan. 28.

“This was a complex case in which the entire law enforcement community worked together to bring high-level fentanyl traffickers to justice. The end result should serve as a warning to those who choose to sell fentanyl in the Granite State,” Murray added.