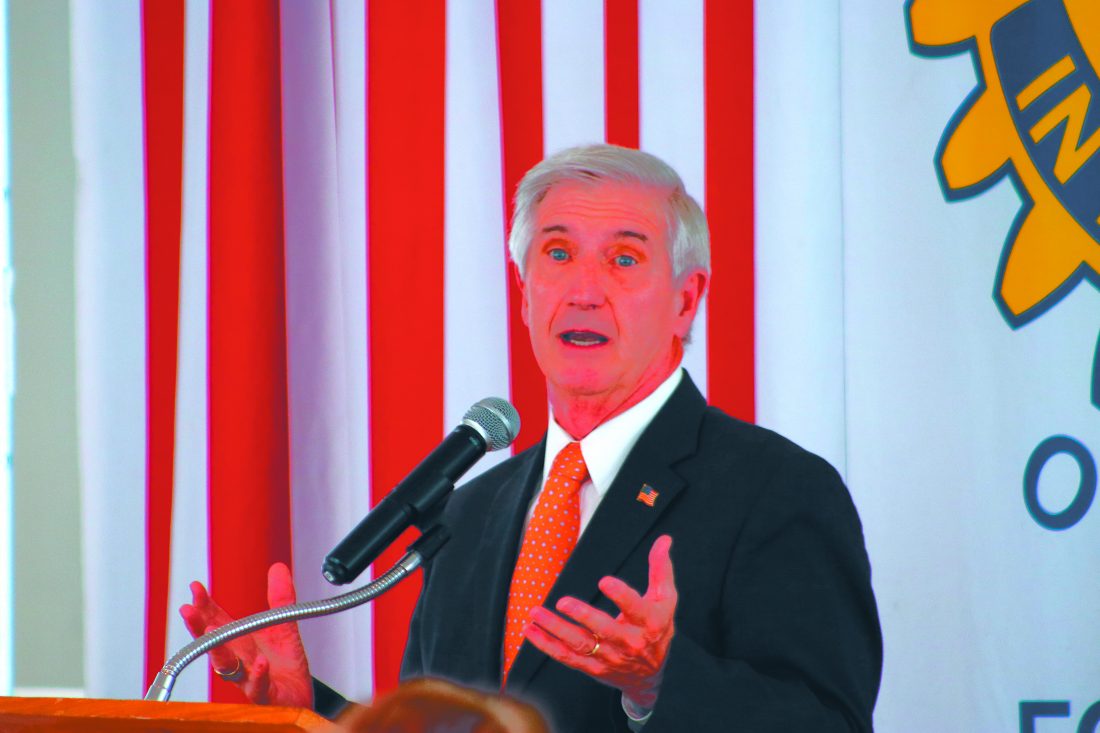 NASHUA – Plenty of Americans remember exactly where they were upon learning that terrorists flew hijacked airplanes into the World Trade Center towers and the Pentagon on Sept. 11, 2001.

During the Monday meeting to the Rotary Club of Nashua, former White House Chief of Staff Andrew Card shared his memories of having to communicate to President George W. Bush that the country was under attack on that day.

Card spoke at the Rotary Club of Nashua three years ago on his experiences and used his time Monday to continue the stories he had shared previously.

According to Card, on the morning of Sept. 11, 2001, Bush woke up at country club in Sarasota, Florida with plans to go for a run and then later visit the Emma E. Booker School.

“It’s going to be an easy day,” Card recalled telling Bush. “You’re talking about your favorite topic, education reform, leaving no child behind – it’ll be an easy day.”

In the age before smartphones and social media, news traveled a bit slower in 2001 than it does now.

Right as they were arriving at the school, Card said he remembered two people raising the question, “Hey, anybody hear about a plane crash in New York City?”

Not thinking about it too much at the time, they headed over into the school and were greeted by the principal. Bush was planning on reading with a group of second-graders and then going to meet with a crowd of community activists and teachers in the school’s gymnasium afterward.

As Bush was about to head into the classroom, Card said a White House staff member said that it appeared a small twin engine prop plane crashed into one of the towers at the World Trade Center.

“The principal and the president and I all had the same reaction: ‘Oh, what a horrible accident – the pilot must have had a heart attack or something,'” Card said.

The principal then opened the door to the classroom and in she went with Bush.

Shortly thereafter, the White House staff member came back up to Card and said, ‘Sir, it appears it was not a small engine prop plane; it was a commercial jetliner.'”

And then, Card recalled, the staff member said, “‘Oh, my God. Another plane hit the other tower at the World Trade Center.”‘

It dawned on Card what would be his next task.

“I was going to be cool, calm and collected and try to help the president make decisions that were not emotionally driven,” Card said. “I also thought about the words that I would use. I knew that the president was speaking in front of second-graders with a press pool. I presumed there was a boom microphone hanging over his head. And I didn’t want to get into a dialogue with him.”

Card entered the classroom without the president noticing.

“The teacher was conducting a dialogue between the young students and the president. ‘Say good morning, Mr. President,’ ‘Good morning Mr. President,'” Card recalled. “The press pool was gathered to my right.”

Once the students went to grab the book that they would be reading with the president, My Pet Goat, Card said he leaned down to the president and said, ‘A second plane hit the second tower. America is under attack.”

Card said he believes when Bush was in that classroom and he whispered into his ear, that was the moment Bush recognized what his real responsibility as president was.

“Sept. 11 happened and it was a shock to a divided country, but it brought the country together,” Card said.

“We had a pretty divided country when it came to policy and partisanship, but the president was phenomenally successful in getting things done,” he added.

After the attacks on Sept. 11, Card remembered being able to “hear the fog of war” because they were able to hear all of the radio communication of all the planes that were in the sky and learn what the military was doing.

Then, they got to planning. They were going to invade Afghanistan.

A moment that stuck out for Card prior to the invasion was meeting nine young men with Bush who would be dropped into Afghanistan before the country prosecuted war.

“I see nine young men and they were very young looking. They were ready,” Card said. “They were ready to be dropped by parachutes in Afghanistan to conduct unbelievably dangerous missions to get ready for us to have a military that could then answer the call of duty,” Card said.

“I’ve had the unfortunate opportunity to watch presidents send young men and women into harm’s way. It always happens at night,” Card added. He said this leaves a permanent burden on presidents.

“There’s no more greater challenge that a president has than the challenge of saying, ‘I need help. I cannot keep my oath to protect this country without help,'” Card said.

Card finished his remarks with a reminder that current events challenge a president, but it is nothing compared to the burden of keeping the oath to protect.