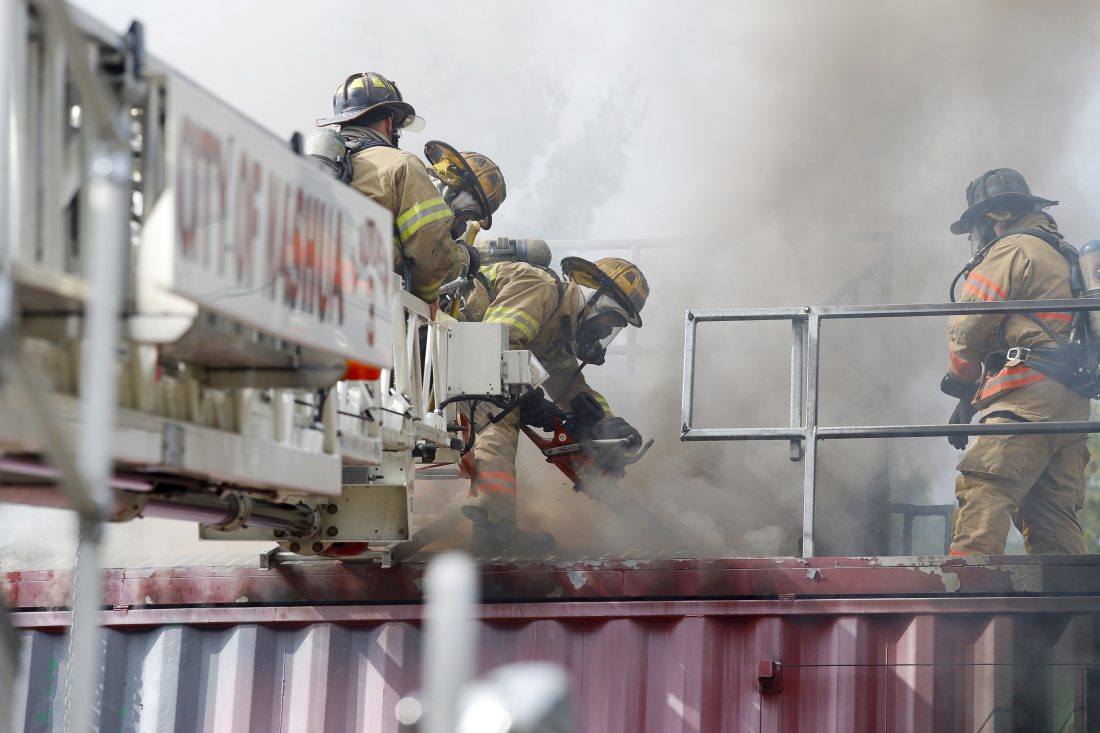 NASHUA – Firefighters must complete hours upon hours of training to prepare for their responsibilities, which may include running into burning buildings to save lives.

During the last four weeks, and as Nashua’s Fire Prevention Week continues, four new recruits have endured the rigors and tests in an effort to join the department. Newcomers Alex Smith, Kyle Lewis, Patrick Bue and Steve Maffee are learning at the Four Hills Landfill training facility.

“They’re stretching lines off the apparatus – entering the building,” Capt. Glenn Nielsen, the head of the department’s Training and Safety Division, said after running one of the many drills with the new recruits on Monday.

“They have two floors of fire. There’s forcible entry props step up, so they have to make their way through that first, just as if it were a locked door on a residence or a commercial building.”

“Then, make their way upstairs — put the fire out,” Nielsen added. “At the same time, we have a group ventilating the roof with saws to show them what it feels like on the both the roof and inside the building during a fire.”

Training requirements for Nashua firefighters include 40 weeks of Fire 1 and Fire 2 training, as well as the skills needed to serve as as EMTs. Recruits must pass numerous tests to become certified firefighters.

Those joining Nashua Fire Rescue must complete these trainings, as well as department-specific drills prior to being assigned to work at stations throughout the city.

All four new recruits are coming to the department with previous experience, with three coming from career departments and one coming from a volunteer background. Nielsen said the training they are currently being put through is to ensure that all four recruits are completely at ease with how Nashua’s system works.

“This training is how to become a Nashua fireman, so they are familiar with how we do things here and not how their other previous departments or somebody else might do it,” Nielsen said.

As they have completed the tests, Nielsen said the recruits have shown promising progress, which he attributed to their prior experience prior to coming to Nashua. He said it is not always the case that recruits progress so efficiently, as the four new members have not seen any setbacks throughout their training.

“This crew has some experience, so they are blending very well. They have good teamwork – their skills are good,” Nielsen said. “We haven’t had to go back and redo anything, so it’s been good training.”

Officials within the chief’s office have also taken notice of the new recruits’ progress, as Assistant Fire Chief George Walker said the four newcomers are showing the necessary skills.

“They’ve come together as a crew and learned how to communicate with each other and depend on each other and build that camaraderie,” Walker said. “They’ve been there doing basic firefighting skills, pulling hose lines – charged and uncharged – SCBA (self-contained breathing apparatus) drills, maze drills, a lot of ladder training, throwing ladders and working the Aerial device.”

When the recruits are finished with their training, they will each be placed in one of the four working groups to work with separate individuals throughout the city. They still face months of evaluation.

Walker said there is a national trend of fewer recruits available to fire departments, which has led Nashua’s department to prepare to reevaluate how they will go about attracting candidates in the future.

“Recruiting in a lot of the first-responder’s areas have been tough,” Walker said. “After this recruiting class, we’ll be looking to put together a new recruiting plan as far as testing and recruiting goes.”