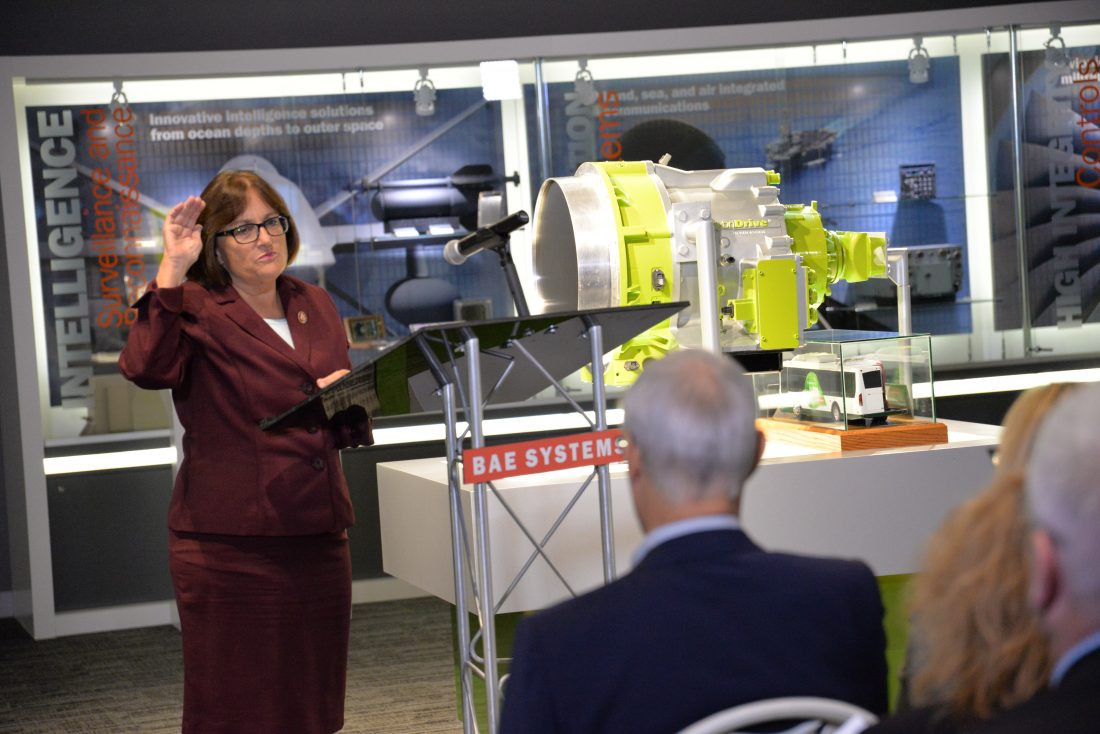 NASHUA — City leaders still have a long way to go to achieve the goal of deriving 100% of their energy from renewable sources by 2050, but they are celebrating the debut of two electric hybrid buses that are expected to enter service in the coming weeks.

Via a $1.1 million grant from the Federal Transit Administration, the city purchased the two buses. They feature BAE Systems’ electric hybrid propulsion technology, which resulted in the Thursday announcement taking place at BAE’s Nashua office.

The buses are expected to reduce both greenhouse gas emissions, as well as costs and fuel consumption.

“As a result of the grant, we were able to buy these two buses to complement the nine CNG (compressed natural gas) buses that we have,” Mayor Jim Donchess said Thursday morning.

U.S. Sen. Maggie Hassan, D-N.H., also attended Thursday’s ceremony, joining the mayor and a number of other officials. Hassan said Thursday marked an important step forward, and an important day to realize that solutions can be found to build a more sustainable and affordable clean energy future at all levels of government, as well as in the private and public sectors.

“We know there have been some setbacks at the national level in terms of fighting climate change, but cities in New Hampshire, and all across the country, are showing us strong leadership, and they’re keeping us moving forward,” Hassan said. “Transportation accounts for roughly 30% of greenhouse gas emissions, and that makes projects like this one absolutely critical.”

Hassan was joined by U.S. Rep. Annie Kuster, D-N.H. Kuster is a member of the House Committee on Energy and Commerce, and stepped up to help secure the grant back in June 2018 by writing a letter of support for the city’s application for this grant funding.

“We’ve estimated that these buses will save 4,000 gallons a year in diesel fuel,” BAE Regional Sales Manager John Hroncich said.

Other savings include nearly 50 tons of carbon dioxide emissions that will be prevented from being released into the air. Hroncich said the buses should service the city for a minimum of 12 years.

Hroncich said every time the bus breaks, it uses regenerative breaking, meaning each time it slows down, a generator spins in reverse to slow the bus. As it is spinning in reserve, it creates electricity that feeds the batteries, The resulting energy is used to help push the bus. BAE manages all electrical power onboard the buses.

“While we’re saving 30% on fuel, we’re actually saving about 80% in emissions because we’re keeping that engine at its most efficient RPM (revolutions per minute) range,” Hroncich said.

He said the partnership BAE has with the Nashua Transit System is a special one, not just another sale. This is because many BAE employees ride city buses, live in Nashua and their families will now be enjoying the cleaner air that these buses will help create. While BAE is proud to make a difference in the community, officials are also making an environmental impact in other areas.

Hroncich said there are almost 11,000 similar buses around the world in larger cities such as New York City, Seattle, Montreal, and Paris. However, in terms of these two new buses in Nashua, city Transportation Manager Camille Pattison highlighted how they come with a a system which allows wheelchair passengers to board and press a button to secure themselves – without assistance from a bus driver.

“Nashua Transit System was thrilled to have Congresswoman Kuster attend our ribbon cutting ceremony today for our two new electric hybrid buses,” Pattison added. “We are grateful to have the continued support from our congressional delegation to launch this new green technology. The city of Nashua is proud to continue offering sustainable transportation options to our community.”

“I’m very excited to have this new cutting edge technology here in Nashua, and I’m proud that our very own BAE Systems played a role in manufacturing the buses,” Kuster added. “It was comfortable, colorful and quiet.”