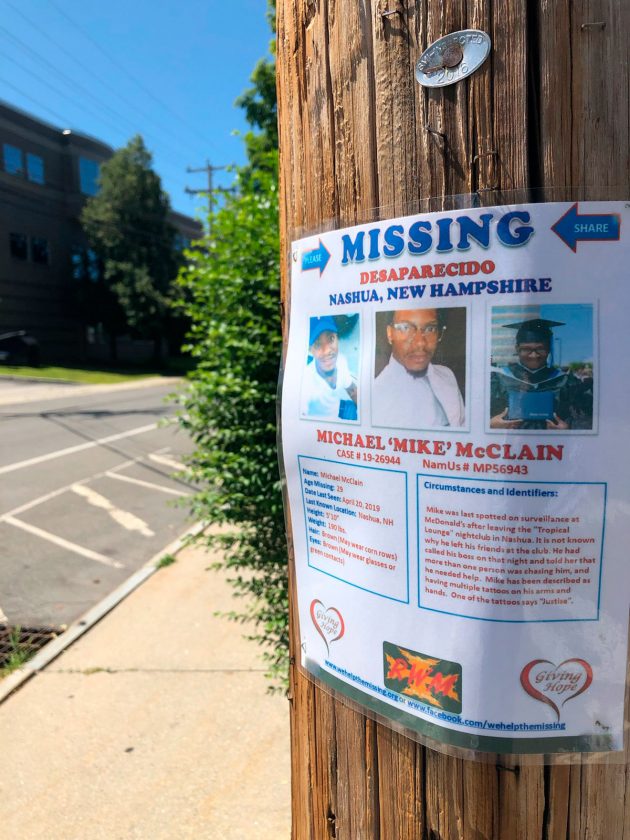 NASHUA — More than four months have passed since Michael McClain disappeared in the area of East Hollis Street … and Nashua police still are not talking about the case.

His father, Edward McClain, said Nashua Police Department officials have communicated with the family very little in the last four months. He said the only updates he or Michael’s mother receive are when they initiate a call to police.

“I gave up calling,” McClain said. “I email. It’s process. It’s a psychological strain, an emotion strain. I shouldn’t be calling them constantly. Give me a call once a month, every two or three weeks. Give me something. Nothing.”

Friday, McClain said some of his son’s friends continue searching for Michael. He said other people are actively doing things to bring him home.

As far as police, he said he does not know why they are not more responsive.

“If any child goes missing, that’s the worst fear any parent can go through, and that’s the nightmare we’re living right now.”

McClain said he does not believe Nashua police are doing enough, but understands missing persons cases can be an ongoing thing.

Michael McClain, 29, of Manchester vanished in the early morning hours of April 21. It has been reported that he was last seen in the area of McDonald’s on East Hollis Street. Other than that, he has not been seen or heard from since.

On the night of April 20, he and some friends had gone out to the Tropical Lounge, located at 14 W. Hollis St. where an altercation reportedly took place. Reports have circulated claiming he was not involved. McClain went missing shortly thereafter.

Michael was born and raised in Stamford, Connecticut, and has ties to the area. More recently, he has been living in Manchester for seven years or so. He stands at 5 feet 10 inches tall; has brown eyes, but wears green contacts; has tattoos on his hands and arms; and wears braids. He graduated from Hesser College (now Mount Washington College) with a bachelor’s degree in criminal justice. Most recently, he worked with autistic children at Easterseals New Hampshire.

However, next month a Shining Hope event sponsored by LostNMissing is scheduled for Michael and the public is invited to attend. At 10 a.m. Sept. 14, people will gather at the Stonehouse in Nashua’s Greeley Park. The rain date is Sept. 15.

Nashua police did not return a phone call seeking comment.