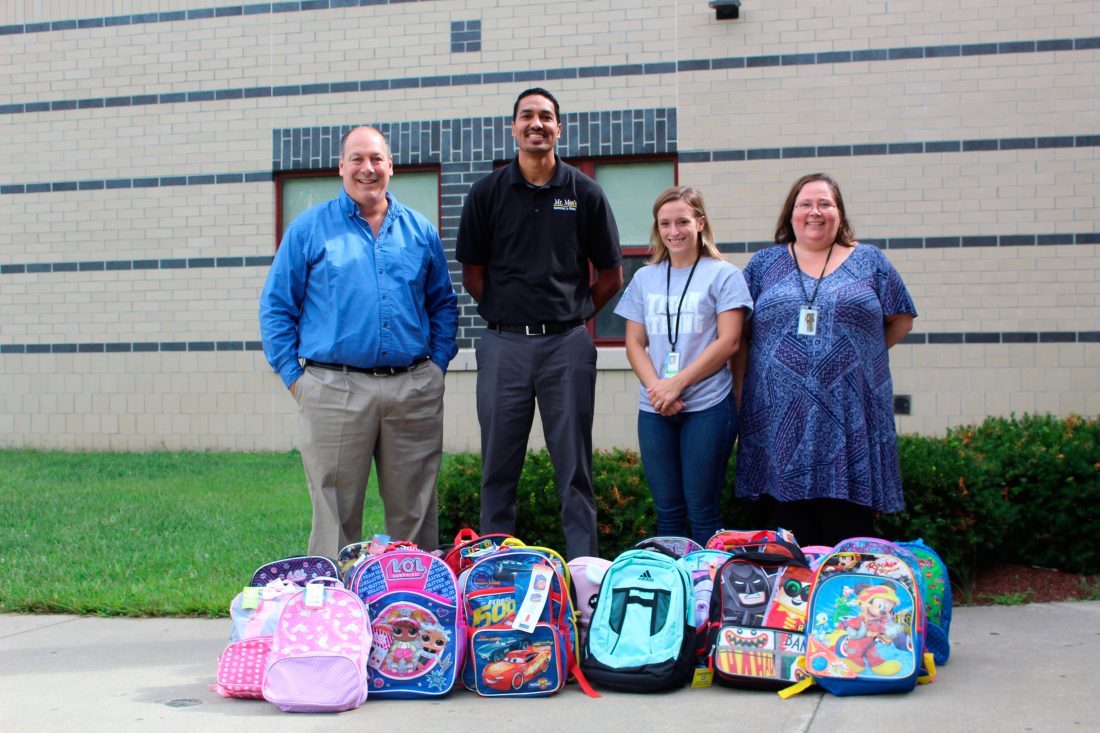 NASHUA – In a city afflicted by a growing homelessness problem, Nashua School District officials said nearly 400 students met the definition of not having a home during the last academic year.

In efforts to help Nashua School District students in need, Harry Cheema, owner of Mr. Mac’s restaurant, organized a fundraiser with his employees to collect school supplies and backpacks for them.

About a year and a half ago, Cheema created “Mac Gives Back” as a way to raise funds for groups in the community, including the Boys & Girls Club, Meals for Kids and the American Diabetes Association.

This year, one of Cheema’s team members suggested the idea of providing backpacks for students. The group decided unanimously to donate their tips and Cheema matched the amount. With this funding, they were able to purchase backpacks and school supplies for 25 students.

This will all go toward a serious need within the district. According to the district’s Homeless Liaison Taylor Paquette, last year the district had almost 400 students classified as homeless.

“Our definition of homeless is much broader than that of HUD (U.S. Department of Housing and Urban Development),” Paquette said. “For us, a student who is homeless or in transition includes families that are doubled up with other families due to loss of housing or economic hardship; those who are staying in hotels or motels, transitional living programs or shelters; those who are literally homeless as in staying in their cars and abandoned buildings or camping; as well as families that are in substandard housing.”

Paquette said many families often don’t want to come forward for fear of having to switch schools, or simply being attached to the stigma of homelessness.

“It’s definitely a problem in our community, especially with the housing rates around here, and the cost of a one-bedroom apartment,” Paquette said.

“Students who are homeless have more difficulty getting to school, exceeding in school and doing their homework,” she added.

Paquette said the backpacks will be of use, noting there is a need for backpacks and school supplies throughout the entire school year, not just at the start.

Paquette said through this act, officials can provide students funding for field trips, school supplies, school uniforms, along with outreach to families, as well as violence prevention programs.

However, there are certain needs among some students, such as a work uniform or haircut, that are not covered, despite being a barrier for students.

“It just gets tricky sometimes as to what is technically a barrier,” Paquette said. “But we try to provide as much of a typical experience for these students so they don’t feel different. We make sure they go to their senior activities, they get their cap and gowns, they go on field trips, they have access to free lunch.”

Nashua School District social worker and McKinney Vento Liaison Jen Boudrieau said from talking with different students, she has found there are many different barriers homeless youth face that one might not initially consider.

“A 16-year-old girl staying in her car that has a flat tire, or individuals that are staying in a hotel that doesn’t have a microwave, so they are spending all their money on fast food. There are so many barriers for them and challenges that they face every day,” Boudrieau said. “So a simple thing like a backpack gets them excited and they can carry so much in them. It really helps them.”

United Way of Greater Nashua President Apfelberg said he also gets calls for things that he said should be relatively easy to purchase at a low cost. That is not the case for a homeless young person, however.

“A young teenager gets a job at a landscaping company, but needs a pair of work boots, or can’t afford a driver’s license and needs that for work or even getting a haircut. Things that are really, if you think about it, low cost have an unbelievably high impact,” Apfelberg said.

Apfelberg said for years at the United Way’s Sleep Out event, they have talked about youth homelessness. Now, Apfelberg said he is sick of “talking” about it. He wants to take action.

“We need to figure out how we, as a community, can have some really serious interventions that can help these kids,” Apfelberg said.

A future goal for Apfelberg at the United Way is building a fund that is specifically for youth homelessness. Apfelberg said next year, he plans to recruit 25 brave individuals who are willing to skydive and raise $3,000 to $4,000 each. This would build a fund of about $100,000 to help homeless youth in the community.

Funds would also help address all the layers that come with being a “housing insecure young person.”

“There is nobody, nobody, more vulnerable than a housing insecure young person,” Apfelberg added. “There’s a whole layer of reasons on top of just being housing insecure, why youth homelessness is a very serious issue and we want to not just shed some light on it this year at our event, but also do something about it.”

Apfelberg said the Sleep Out event will be a good place to learn more about youth homelessness. It is scheduled for Sept. 20-21 at Nashua Community College.

Though there is work to be done, Apfelberg is confident.

“Four hundred is a big number, but it’s not a number that we can’t tackle as a community,” Apfelberg said.