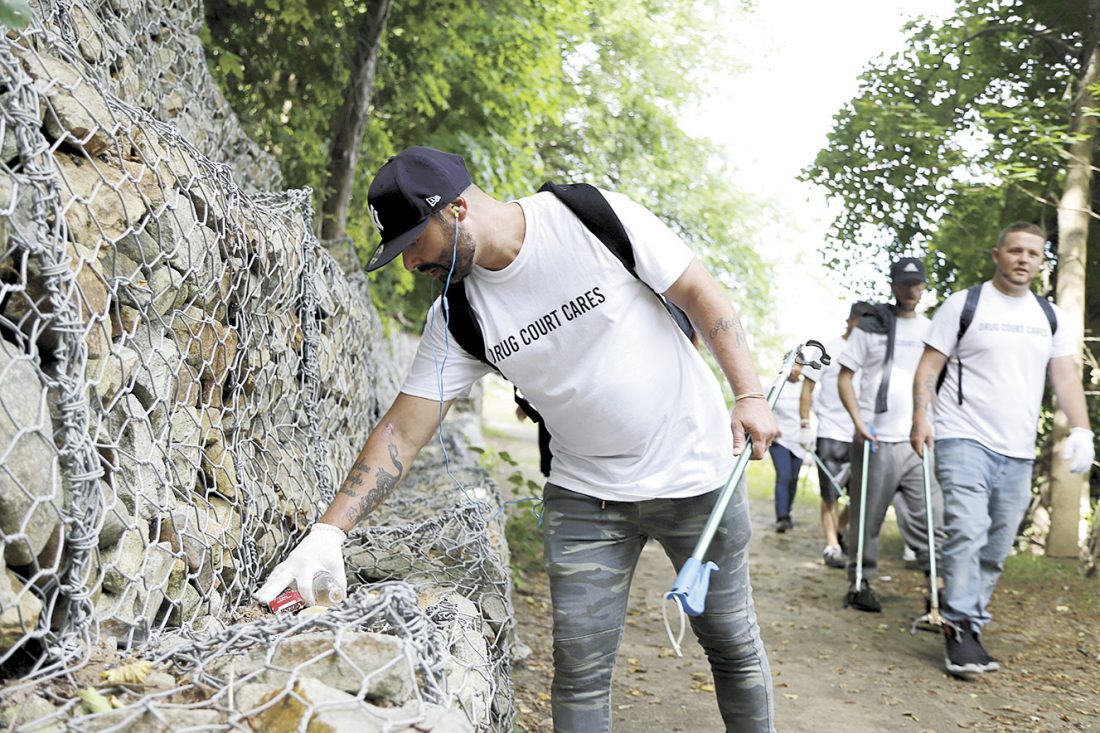 NASHUA – As part of their work to make amends for their shortcomings, participants in the Hillsborough County South Adult Drug Court spent Friday morning cleaning up areas of downtown Nashua.

This was the program’s second annual Drug Court Cares Day. Members at Revive Recovery Center also pitched in to help.

While collecting trash and cleaning up areas where some participants said they know individuals with substance abuse problems go during low points in their lives, organizers hope these actions will show the community that drug court participants are trying to improve themselves.

Matos said the event is important in showing the participants they can be recognized for more than their past troubles. In stead of being remembered for negative actions, they have the chance to show the public what good they can accomplish.

“It’s a really good thing for the participants to see that we can all come together and do something like this and be recognized for that,” Matos said.

“Being recognized for something good – it’s a heart healer,” she added. “It’s a karma fixer.”

In a statement, presiding Drug Court Judge the Honorable Jacalyn Colburn said the entire community benefits from the program: “This is an important day for drug court participants and staff to thank the community for its important support,” Colburn said.

“The entire community benefits when our participants are successful in ending the cycle of addiction and associated criminal behavior. Drug Court Cares Day is just one small way we can say, ‘Thank you.'”

Those currently in the program agreed that being out in the community making a difference, while showing they are trying to make amends, is an important part of taking the next step in their lives.

While spending his morning with his fellow program participants, Andy Pittaluga said the event is eye-opening, especially seeing items such as needles that have an impact on the city’s youth.

“It’s sad because the number one thing is you see all these needles out here because you have a lot of kids that walk through here,” he said. “For them to see something like that is not healthy at all.”

Another participant Jospeh Killgren, said he believes the program is a great opportunity for those such as himself, who have had struggles with substance abuse. He said being out in the community cleaning up trash is something people should do on a more regular basis.

“Drug court is a great program for people who want to do the right thing, who have struggled with drugs in the past,” he said. “I think this is great.”

“I think that people shouldn’t have to be in drug court to want to do this,” Killgren added. “I pick up trash with my son all the time – every time we go hiking. It’s our planet.”