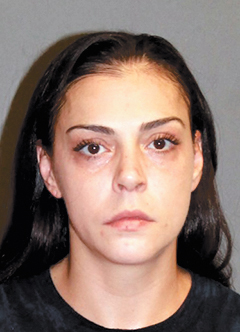 NASHUA – Allegedly driving a BMW while “holding a cell phone up to her face” down Amherst Street on Tuesday afternoon, Tracey Pelletier then reportedly led police on a 60 mph chase, crashed her vehicle, exited, fled on foot, entered a house and locked the door – all while a 6-year-old boy was in the car.

What Nashua police prosecutor Katherine Muzzy described as “a disproportionate reaction” by Pelletier, escalated the would-be traffic stop into a high-speed pursuit down Nashua’s busy Amherst Street shortly before 2 p.m. Tuesday. Muzzy detailed the allegations against Pelletier during Wednesday’s arraignment, which took place in Nashua district court via video conference from Valley Street jail in Manchester.

Pelletier had been housed overnight in the jail, and Judge Julie Introcaso’s order of preventive detention at the end of Wednesday’s arraignment will keep her behind bars for the time being. Pelletier is next due in court on Oct. 10 for a pre-trial conference.

While all the charges are either Class A misdemeanors or violation-level offenses, they allege a troubling spate of conduct that police and the prosecutor said put numerous people in imminent danger – not the least of which was the 6-year-old boy who was in Pelletier’s car for the entire episode, and whom she left behind when she bolted on foot after crashing the car about a half-mile from where the pursuit started.

Pelletier, who got emotional at times during the arraignment, said at one point, “I don’t know what I was thinking” as she wiped away tears.

The boy, who is not Pelletier’s biological child, but whom she said she often cared for since he was a baby, didn’t appear to be injured in the crash, but was checked out at a local hospital, police said.

The action began when an officer patrolling Amherst Street allegedly noticed the driver of a black BMW “holding a cell phone up to her face … appeared to be talking with someone,” Muzzy said.

The officer activated his lights and siren, but the driver didn’t pull over, and instead accelerated, the officer wrote.

He watched the car begin passing traffic by using the center turn lanes on Amherst Street as it approached the intersection of Broad Street, the report states.

The officer wrote that he discontinued the pursuit for safety reasons, then lost sight of the vehicle – until he saw a “cloud of dust” rising from what turned out to be the crash scene.

Witnesses interviewed by police estimated Pelletier’s car was traveling between 50-60 mph at the time of the crash, which occurred near the intersection of Amherst and Vernon streets.

Pelletier’s vehicle came to rest after striking another car, then hitting a fence and rock wall at 36 and 38 Amherst St., witnesses said.

When the officer approached the car and found it empty, witnesses told him they saw a woman jump from the car and run down Vernon Street.

They pointed arriving police officers in that direction, and an officer in his report said he saw a woman, later identified as Pelletier, climbing over a fence at 10 Vernon St.

She allegedly disregarded the officer’s commands to stop, police said. He ran after her toward the residence, at which time Pelletier allegedly went into 10 Vernon St. and locked the door.

The officer upon approach said he heard “scuffling” inside, and someone, who turned out to be the homeowner, yelling “get out.”

When officers took her into custody, she cried out “my baby … my baby,” Muzzy, the prosecutor said. When they asked Pelletier what she meant, she told them about the child she had left in the car.

When they went back to look for the child, they found a witness comforting him, the reports state.

In a post-arrest interview, according to Muzzy, Pelletier admitted she was speaking on the phone, and said she fled because her license was suspended and she thought there was a warrant out for her arrest – which there was not, Muzzy said.

All told, the charges filed against Pelletier include nine Class A misdemeanors: Three counts of conduct after an accident; two counts of endangering the welfare of a child; and one count each of resisting arrest or detention; disobeying a police officer; reckless conduct; and criminal trespass.

The violation-level offenses include one count each of driving after revocation or suspension; driving while using a handheld mobile device; and reckless operation.