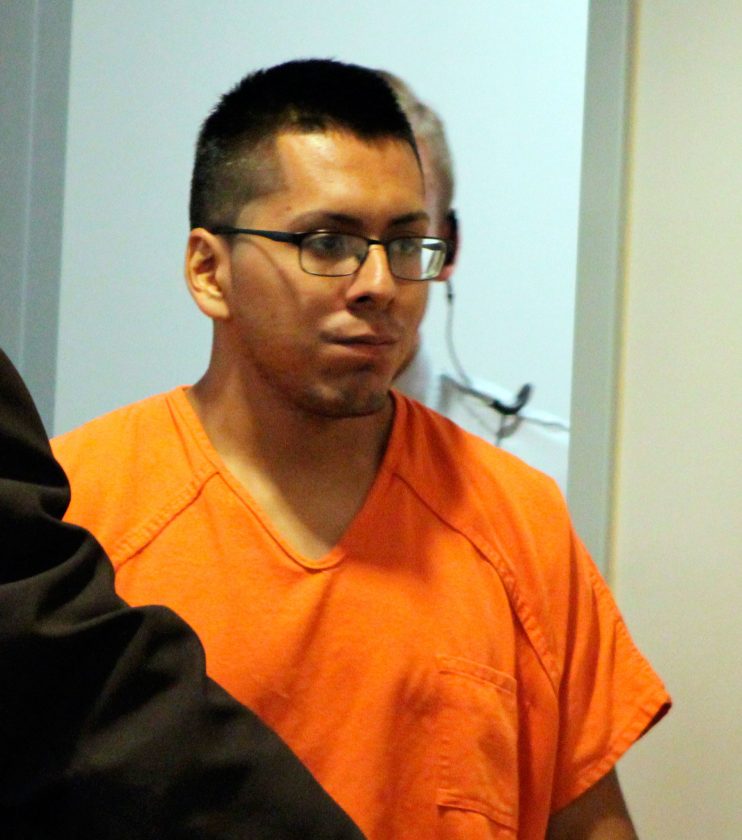 NASHUA – A Hudson man is facing more than a dozen charges, including felony assault, after he allegedly waited in the early-morning darkness Sunday for a woman to arrive home, then stepped from the shadows and began assaulting her, according to police and court documents.

He is accused of “lying in wait” for the woman, also 21, who is described as a former girlfriend of Flores’. She told police that when she got out of her car and began walking toward her house, she “observed a male subject walk from a dark part of her driveway,” and recognized him as Flores.

Police said Flores was out on bail at the time, stemming from his arrest on June 2 on assault charges involving the same alleged victim. Conditions of bail prohibited Flores from having any contact with the woman, stay away from her residence and stay at least 300 feet from her.

That circumstance accounts for three of the 13 charges against Flores: Two counts of stalking and one count of breach of bail, all misdemeanors.

The other misdemeanors include five counts of criminal mischief; two counts of domestic violence – simple assault; and one count of obstructing the report of a crime.

While a date for a Superior Court hearing on the felony charge is pending, Flores is scheduled for a pre-trial conference on the misdemeanor offenses on Oct. 2 in Nashua district court.

Assistant County Attorney Brett Harpster said at Monday’s hearing that Flores grabbed the woman as she headed for her house, and a struggle ensued, during which he allegedly took her keys and tore her clothing.

She told police she yelled for help as Flores allegedly broke the screen door “and forced her inside.” He allegedly grabbed her cell phone and was “trying to gain access” to it as the woman “kept screaming for help,” according to police reports.

He allegedly covered her mouth, grabbed her arm and took her upstairs, where she tried to get to a window to call for help, but Flores allegedly stopped her, police said.

She picked up the “landline” phone to call 911, but Flores “took the phone … threw it at her bedroom door and threw her cell phone at a wall,” police said.

The woman told police she then grabbed the cell phone and ran downstairs with Flores in pursuit, and locked herself in a bathroom. Flores allegedly smashed a table lamp then threatened to break down the bathroom door, but the woman said she was then able to call 911.

She said Flores fled at that point, but when police arrived they went to his residence, located him and took him into custody.

“There are multiple viewpoints” to the allegations, Amorin said, noting that her client has a home and works full-time.

If he was to be held on preventive detention, Amorin said, it could likely cost him his job. She asked Judge Charles Temple for $3,000 cash bail, to give Flores an opportunity to be released.

But Temple imposed preventive detention, saying he finds that Flores “presents a danger to (himself) as well as the (alleged) victim.”

Temple said he would schedule an evidentiary bail hearing for Flores if Amorin requests one.