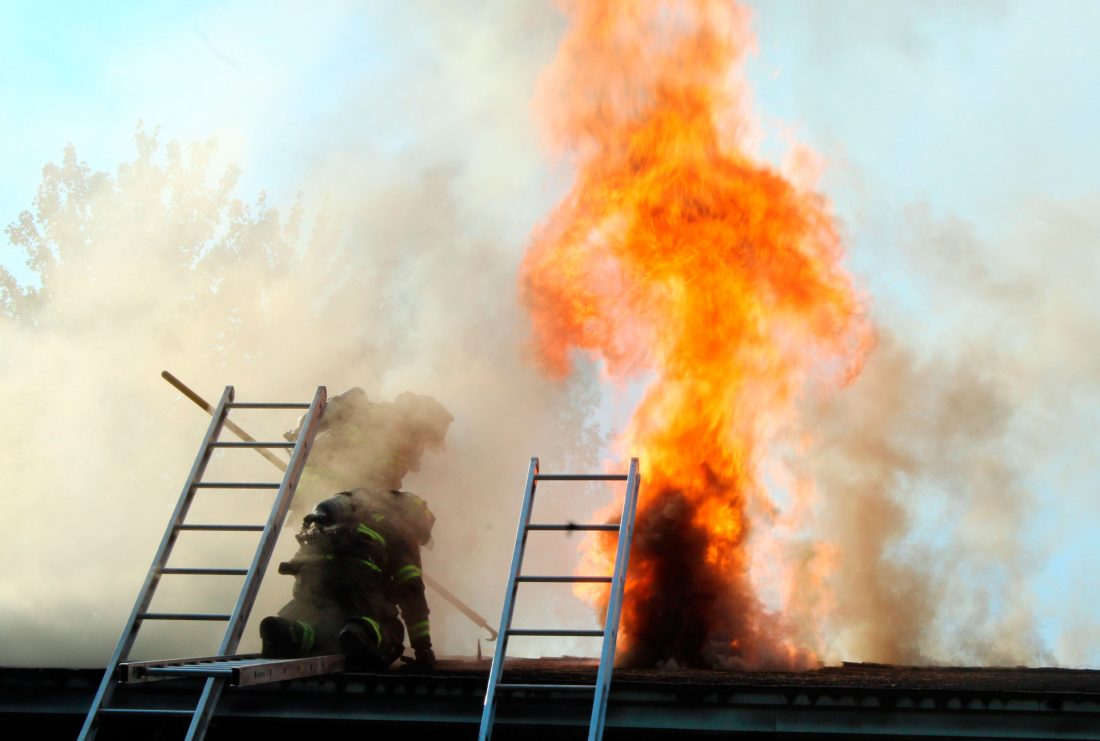 Telegraph photo by DEAN SHALHOUP Two Nashua firefighters battle their way through heavy smoke to get to the flames that erupted through the roof of 76 Pike St. during Sunday's three-alarm fire.

NASHUA – Firefighters knew they were in for a tough battle the moment the first crews pulled up to 76-78 Pike St. around 4:30 p.m. Sunday.

“They had heavy fire showing upon arrival … it had already extended up into the attic,” Deputy Nashua Fire Rescue Chief Kevin Kerrigan said. “A second alarm was struck right away to get more manpower here.”

In addition to the rapidly spreading flames, firefighters were also faced with the inability to drive an engine or ladder truck up the steep, narrow driveway, forcing crews to pull hoselines from the engines and manually carry them up the incline.

In sizing up the situation, Kerrigan said scene commanders were quick to strike a third alarm, which summoned all on-duty Nashua firefighters to the scene and brought crews from several neighboring communities in to cover Nashua’s stations.

The residence is the last house on Pike Street, where many homes were converted from small cottages built in the 1930s and 40s. Pike Street runs parallel with Daniel Webster Highway, beginning near Exit 3 and ending at 76-78 Pike St.

Hot, humid conditions only contributed to what Kerrigan called “the difficult conditions” crews faced in battling the stubborn blaze.

“This was very manpower intensive,” Kerrigan said. “We had a lot of access problems.”

He said it wasn’t immediately known how many people live in the building, which sits on a roughly one-acre strip of land. At least one person was home when the fire broke out, Kerrigan added.

Crews reportedly rescued a cat from the burning building, and it is believed a dog was either rescued or got out on its own.

Two firefighters, one from Nashua and the other from Tyngsborough, Massachusetts, sustained what are believed to be minor injuries. They were treated at the scene and transported to local hospitals for additional treatment.

City property records list the owners of the residence as Dana Coburn and Loretta Murray. The records describe the house as a “family conventional style building,” built in 1949 and currently having two units with eight total rooms.

Kerrigan said it wasn’t immediately clear what caused the fire or where it started. That information will be the focus of the ongoing investigation.

Dean Shalhoup may be reached at 594-1256, or at dshalhoup@nashuatelegraph.com or @Telegraph_DeanS.