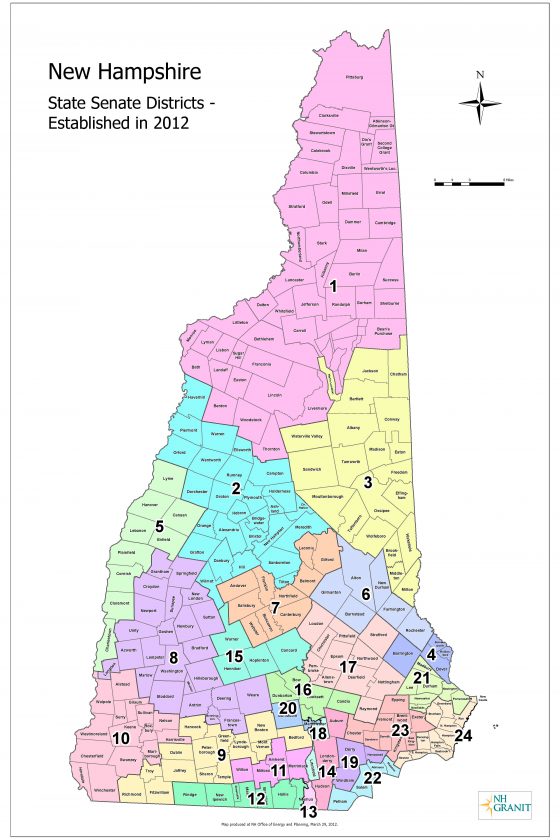 NASHUA — Despite what some consider “jagged edges and extensions” in the existing New Hampshire Legislature and Executive Council districts, Gov. Chris Sununu said gerrymandering is rare in the Granite State, as he vetoed a bill that would have created an independent redistricting commission.

“Our current redistricting process is fair and representative of the people of our state. While I do not question the sincerity of the legislators who support House Bill 706, one of the partisan out-of-state organizations pushing for this legislation states that its mission is to ‘favorably position Democrats for the redistricting process.,'” Sununu stated in his message regarding the veto of House Bill 706. “This is very concerning and undermines H.B. 706’s stated goal of creating fair electoral districts.”

Sununu issued his veto amid several others on a busy Friday, which included his rejection of a bills that would have increased the state’s minimum wage to $12 per hour, as well as legislation that would have placed restrictions on those looking to purchase firearms.

According to the language of H.B. 706, it would have created an independent redistricting commission, with its stated duties to, “Conduct an open and transparent process enabling full public consideration of and comment on the drawing of district lines.”

“Districts shall form single boundaries and shall not be bisected or otherwise divided by other districts, and shall respect the geographic integrity of political boundaries to the extent practicable without violating the requirements of state law or any preceding subdivisions,” the legislation states. “Districts shall be drawn in compact shapes and shall avoid jagged edges and extensions.”

However, Sununu continued to emphasize that disputes with district lines do not occur very often in New Hampshire.

Although Democrats successfully gained a majority of seats in the Senate, House and Executive Council as a result of the 2018 elections with the districts as they exist, elected party members were not pleased with the veto.

“The Legislature’s bipartisan work to establish an independent redistricting commission was not just one of the most important pieces of legislation considered this year, but in our state’s history. It is deeply discouraging that with one fell swoop, Gov. Sununu blocked vital work to take partisanship out of the political process of choosing legislative districts,” state Sen. Melanie Levesque, D-Nashua, said. “In my district and at the State House, I hear calls for fairer elections every day. Not one person testified against H.B. 706 at the Senate hearing. It is clear New Hampshire voters are fed up with the status quo in which politicians pick their voters.”

“At a time when our state and country is often polarized over politics, this proposal for an independent redistricting commission was a beacon of hope,” state Sen. Shannon Chandley, D-Amherst, added. “I hope my colleagues will once again join together to override Governor Sununu’s veto of H.B. 706.”

“Shame on you, Governor, for failing to recognize the will of the people to end gerrymandering. And shame on you for ignoring the good work of our senators and representatives at the State House,” Tentarelli said.