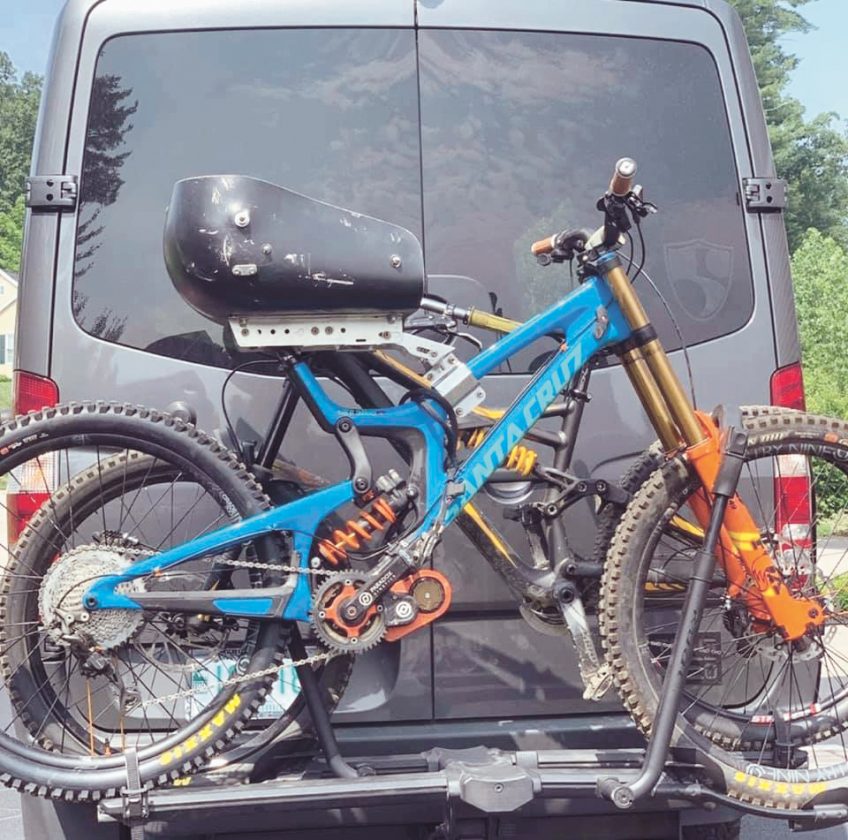 CALGARY – Despite a life-altering injury, one local adaptive athlete is continuing to hit the trails on his mountain bike, although he now needs help locating it after a theft that left him without his one-of-a-kind wheels.

Ryan St. Lawrence, of Nashua, experienced a spinal cord injury in 2016, leaving him with no feeling below the upper chest level of his body. Since that setback, he has been pursuing adaptive mountain biking. However, his specialized custom-made bike was stolen off the back of his van while he was resting at a hotel on his latest adventure in Canada. Despite this disappointment, he is continuing to pedal forward with the hopes of having this unique piece of equipment returned.

“There’s no price you can put on it,” St. Lawrence said. “It’s not something you can buy, it’s 100 percent custom built.”

He said about 100 hours went into building the bike, and that it was not just his that was stolen. His friend’s specialized Enduro EVO also was swiped along with his Santa Cruz adaptive bucket bike. His bike also features an electric motor that gives him some forward momentum when needed. If he had to put a dollar value on the two stolen bikes, he said it would be around $15,000.

A spokesperson for the Calgary Police Service did confirm that the theft had been reported. The spokesperson said police do know that, on July 29, two high-end adaptive mountain bikes were stolen off a bike rack on the back of a vehicle parked at the Hilton Garden Inn, located at 2335 Pegasus Road NE, Calgary.

“You can tell it’s an adaptive bike,” St. Lawrence said.

Meanwhile, last week, St. Lawrence was dropped by a helicopter onto a remote trail in British Columbia, becoming the first adaptive athlete to complete that endeavor, and first to make it down these tracks at Retallack, which is an exclusive backcountry destination nestled deep amongst the Selkirk Mountains in British Columbia.

“It was always a dream of mine prior to being injured to go heli-biking,” St. Lawrence said.

After that trip, he came back to Calgary to meet with a company for another adaptive bike ride where he is doing some filming. It was in-between trips when he stopped at the hotel for a night, to shower and freshen up, when the bikes were stolen. He said the lock holding the bikes on the back of his van were cut, and that the rack itself was busted apart.

“I could not believe it,” St. Lawrence said.

He said he had parked in a spot that was lit, right near the hotel entrance, where it was in view of the front lobby. He estimates he was parked maybe 75-feet from the front door. Nonetheless, he does have another bike he can use for now that will help him ride out the remainder of his trip. The plan moving forward is for his wife to fly out to him on Saturday to do some exploring. After that, he plans to head back home to New Hampshire.

However, he said in September there is the 2019 Fox U.S. Open Race Festival in California, which features an adaptive race. He plans to participate in the adaptive race, but said he will not be able to unless he finds his custom bike. He supposes he still could give it a go on his other bike, but said it would be nice to have all his equipment back.

“I was the first adaptive athlete to build an electric bucket bike,” St. Lawrence said. “I had a lot of firsts on that bike. Even if I don’t get a chance to ride it again, I want it back.”

With a lot of memories made while riding that bike, he said his biggest achievement, aside from building it just a year after his injury, was what he just did with heli-biking. For St. Lawrence, mountain biking is a part of his life. He enjoys being in the woods, and this stolen bike is the vehicle that drives that passion and gets him in the outdoors.

“It’s my passion in life, it’s what drives me, it keeps me going,” St. Lawrence said.

He currently lives in Nashua and graduated from Bishop Guertin High School in 2003, and Colby-Sawyer College in 2007. Right now, he said he is telling everybody to contact him on his cell phone if they have any information regarding the missing bikes. He can be reached at 603-315-7963.