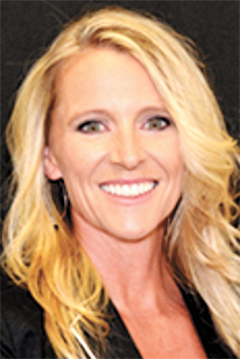 The late, legendary Nashua track and field coach Pauline Albert made far more good decisions than not-so-good ones over her decades at the helm of some of the most talented, disciplined and successful squads to ever come out of the then-singular Nashua High School.

Kathy MacLeod, who was on some of those teams in the early 1980s, easily remembers one of the best decisions Albert made in those days: Selecting an eager, fleet-footed sprinter named Sheri Gagnon to anchor the 4×100 relay team.

“When Pauline made Sheri the anchor, she knew what she was doing,” MacLeod said Wednesday. “Because,” she added, “Sheri was the anchor her whole life, never giving up, whether it was for her family or anything she did.”

Now, MacLeod is among countless people from Greater Nashua to Sheri Gagnon Warren’s Colorado home mourning the loss of the devoted mother and grandmother who, as a dominant teenage athlete from Nashua, burned up indoor and outdoor tracks across New England then went on to marry and raise a family whose love, according to relatives “was her true devotion.”

Warren’s death Sunday was as sudden as it was unexpected, those who knew her said. Doubly difficult to come to terms with was the fact Warren, by all accounts, maintained the level of physical fitness she attained as a youthful athlete decades earlier.

An obituary that appeared in Wednesday’s Telegraph can be viewed at www.nashuatelegraph.com.

Family members and friends are invited to a celebration of Warren’s life, scheduled to take place from 11 a.m.-3 p.m. Saturday at the Courtyard Marriott, 2200 Southwood Drive, Nashua.

Maria Peahl Smith said she and Warren were two of the three tri-captains on the 1982 spring track team – and teammates on the 4×100 relay team that won the New England championships that year.

“I’m really devastated … the shock of it,” she added, referring getting the news of Warren’s passing.

“I’ve known Sheri since we were 14 years old … she always led such a healthy life,” Smith said, noting that the two have stayed in close touch despite the 2,000 miles between them and their respective families.

Smith recalled Warren as a quiet leader who led by example, a competitor whose mere presence inspired fellow teammates, especially the youngsters Albert, their coach, was known to pluck from middle school teams when they showed potential.

Among Smith’s favorite memories, she said, was when the team rolled up to an away meet in not one, not two, but three buses full of talent.

“There were 100 girls on the team, literally,” Smith said. “We’d arrive at the meets, and out came all the purple. They had to run extra heats for us, so everyone could compete.”

Mike MacLeod, Kathy MacLeod’s husband and Sheri Warren’s cousin, called her passing “just a shocking development” that everyone is still reeling from.

MacLeod, also a noted Nashua High athlete who won multiple trophies in the state decathlons, said being two years younger than his cousin he “was able to see a lot of her feats” take place.

“Sheri was a consistently high performer, whether it was the hurdles, running the relay, or the triple jump,” MacLeod said. He recalled the “great synergy” between the boys and girls track and field teams, crediting the leadership of Albert and the late boys coach Bob DeMello.

Warren was “a hard worker … always one of those people who could figure things out,” MacLeod said of his cousin. Her older brother, Scott Gagnon, was “an impressive athlete in his own right,” a talented kid who played hockey and wrestled for Bishop Guertin High School, MacLeod said.

As skilled and successful as she was on the track, Warren’s “true motivation in life was raising her family. That’s what she was also really good at,” MacLeod said.

Warren’s combination of natural talent and an unbending work ethic earned her a full scholarship to Syracuse University, where she sometimes ran middle-distance events, requiring a significant adjustment for a sprinter.

Impressed with the track itself, she also liked its location.

“They have everything you need right there, from a pizza joint to a fancy restaurant to dancing,” she said in the story.

Warren graduated Syracuse with a degree in marketing, which she put to use over the years, most recently as a director of sales and retention at Club Greenwood, an athletic and fitness complex near her Highland Ranch, Colorado home.

In chronicaling her Nashua High track career – which she began as an eighth grader in spring 1978 – Bucknam, the former Telegraph sports editor, summed up that career:

“A list of Sheri Gagnon’s achievements for the Nashua Senior High track and field team over the past five years would stretch nearly the length of one of her New England-record triple jumps.

“And poring over such a list would certainly involve much more time than it takes the Purple Panther senior to race over a batch of hurdles spread over 100 meters – an event in which she is also a New England titlist.”