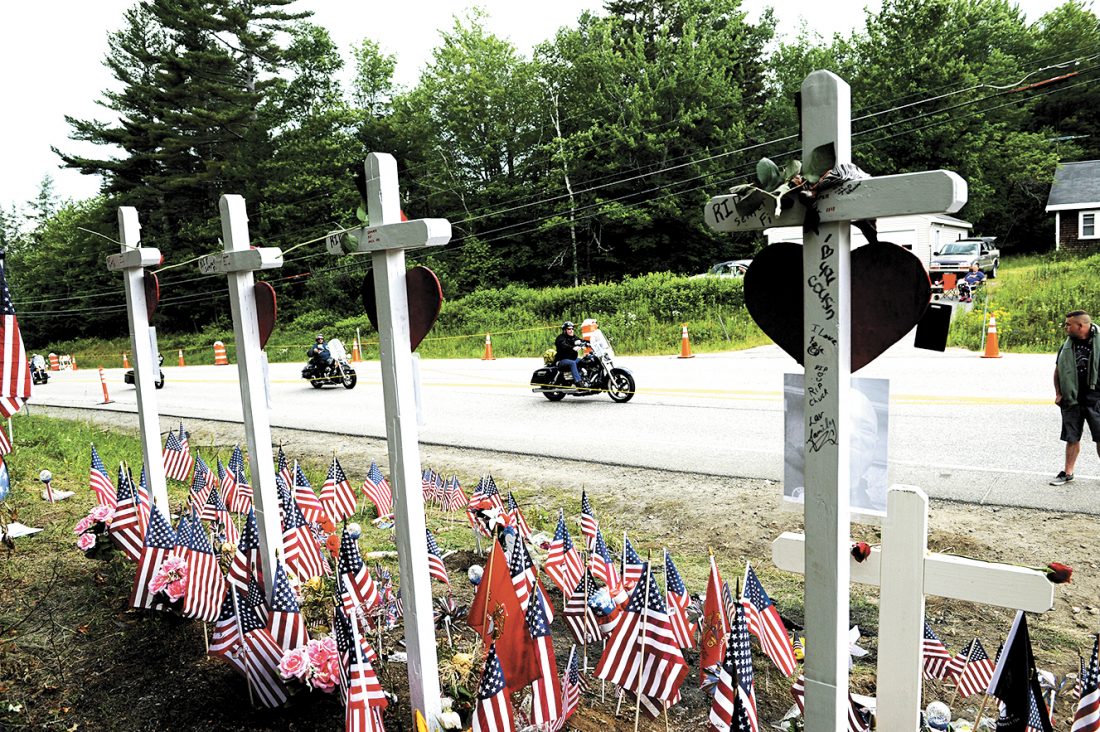 FILE - In this July 6, 2019, file photo, motorcyclists participate in a ride in Randolph, N.H., to remember seven bikers killed there in a collision with a pickup truck in June. State transportation officials in Massachusetts are expected to be questioned during a legislative oversight hearing on Monday, July 22, 2019, in Boston, about the Registry of Motor Vehicles' failure to suspend the commercial license of the truck driver charged in the crash that killed the seven motorcyclists in New Hampshire. (Paul Hayes/Caledonian-Record via AP, File)

BOSTON (AP) – Massachusetts lawmakers opened and then abruptly suspended their inquiry Monday into troubles at the state motor vehicle department that were exposed by a crash that killed seven motorcyclists.

The Legislature’s Joint Committee on Transportation voted to recess just minutes into its oversight hearing after Gov. Charlie Baker’s administration didn’t make some state officials available for testimony, citing its own ongoing investigation.

Democratic state Rep. William Straus, the committee’s co-chair, said the panel would reconvene the hearing only when the administration provided more information and the witnesses it sought.

“We owe it under the horrible circumstances of this case to find out information and get the witnesses,” he said.

The hearing was prompted by a June 21 crash that killed members or supporters of the Jarheads, a New England motorcycle club that includes Marines and their spouses.

Connecticut officials twice alerted Massachusetts about a drunken driving arrest against Volodymyr Zhukovskyy, but the registry failed to suspend the West Springfield man’s license before the deadly crash in Randolph, New Hampshire.

Massachusetts officials later revealed the registry had been storing notifications of serious out-of-state driving violations since March 2018 instead of acting on them.

Baker’s administration has said an ongoing review has led to some 1,600 drivers having their licenses suspended. The governor has also proposed legislation raising the state’s standards for commercial driver’s licenses above federal standards.

Zhukovskyy, 23, has pleaded not guilty to negligent homicide and remains behind bars.

Ahead of Monday’s hearing, Transportation Secretary Stephanie Pollack warned lawmakers that she and Acting Registrar Jamey Tesler were prepared to testify on their response to the scandal, but not the failures that caused it, which are the subject of an independent investigation.

A report from auditing firm Grant Thornton is expected in mid-September.

“I will not mince words: the Registry of Motor Vehicles missed the opportunity to revoke this man’s license to drive before the June 21st accident,” she said in a prepared statement to the committee, which she wasn’t given a chance to deliver. “I am not yet ready to talk in any detail about the people who failed to do their jobs and how they will be held accountable, but I assure you that day will come.”

Tesler, in his prepared remarks, said the registry has enacted reforms since he took over in late June from Erin Deveney, the former registrar who resigned days after the crash.

The agency has created a unit to handle communications with other state motor vehicle agencies, Tesler said. It is also reviewing all 5.2 million licensed drivers in Massachusetts to ensure records accurately reflect any actions taken by other states. That process will take at least several more weeks, he said.

“We recognize that the steps we are taking to address those failures do not make up for past shortcomings,” Tesler said in his prepared remarks, which he also was not able to deliver to lawmakers.

House Speaker Robert DeLeo called on the administration to participate “without exception or qualification” in the committee’s work.

“The Legislature’s oversight role should not – and will not – be subjugated to that of an outside auditing firm,” he said in a statement.

The Transportation Department responded that it has already provided hundreds of pages of documents as part of the committee’s inquiry.

Those include records related to the registry’s new and old technology systems, as well as the agency’s organizational charts, staffing levels and contract with Fast Enterprises, the company that created its new technology system, which launched last year.

The department said that other documents will be released once sensitive information is redacted but that others won’t be provided until Grant Thornton’s review is complete.