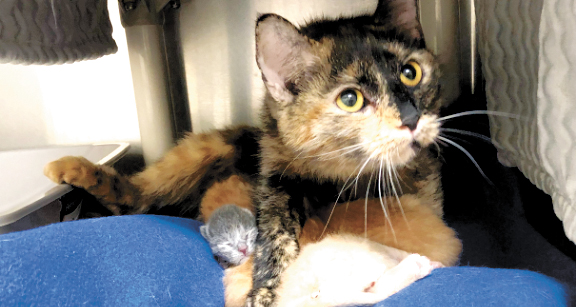 BEDFORD — The Animal Rescue League of New Hampshire opened its doors to 53 new cats and kittens late last week after Director of Outreach and Investigations Maureen Prendergast rescued the group from an overcrowded home in northern New Hampshire.

“A friend of the owner had been trying to advocate for some assistance for him,” Prendergast explained. “She knew the number had gotten so out of control that they needed to call to ask if we could help facilitate.”

The cats were found in what Prendergast described as “distressing” conditions.

“Anytime you have that number of cats, it’s impossible to keep up with the litter boxes,” Prendergast said. “When you get up to 53 cats and kittens, the liter boxes become a non-reality and the cats have to go somewhere else, which becomes part of the household. It hampers the ability to live well.”

Prendergast brought the animals to the shelter’s veterinarian Stephanie Magnarelli and Director of Operations Naomi Stevens for health assessments.

As for now, they are preparing the kittens and cats for adoption.

“The interesting thing here is that we’ve got every age from newborn right on up. Everybody is in a different stage of recovery,” Prendergast said. As soon as the kittens are eight weeks of age and two pounds, they will be spayed or neutered and then available for adoption.

The adult cats will also be spayed and neutered prior to adoption. Prendergast said they expect to have a few adult cats ready by the end of the week.

“We’ve got a room full of cats who know each other, so if people are interested in getting two friends it’s much easier,” Prendergast added.

The most critical group coming into the shelter were the baby kittens, Prendergasted noted.

“We’ve got lots of baby kittens. In a hoarding situation, the mothers aren’t in the healthiest conditions, they’re pretty run down and the kittens need a lot of supplemental feeding,” Prendergast said. “Our kitten supplies are being maxed out right now.”

The shelter has had a busy month. Just two weeks ago, staff assisted a breeder who needed help with a litter of puppies that she had not been able to find homes for. They also had a group of breeding dogs come in, along with rabbits.

“The good news is the two large groups of animals were both dogs and are held in a different part of the building. If they were in the same area it would have been over the top,” Predergast said.

“This is definitely keeping us on our toes. Its all hands on deck,” she added.

Prendergast is looking for help in finding these furry friends a forever home.

“If you have thought about adopting or need a good reason to, come on down and adopt,” Prendergast said.

The nonprofit is relying on donations and has set up a registry at https://www.amazon.com/gp/registry/

Monetary donations can be made at https://rescueleague.salsalabs.org/donate/index.html.