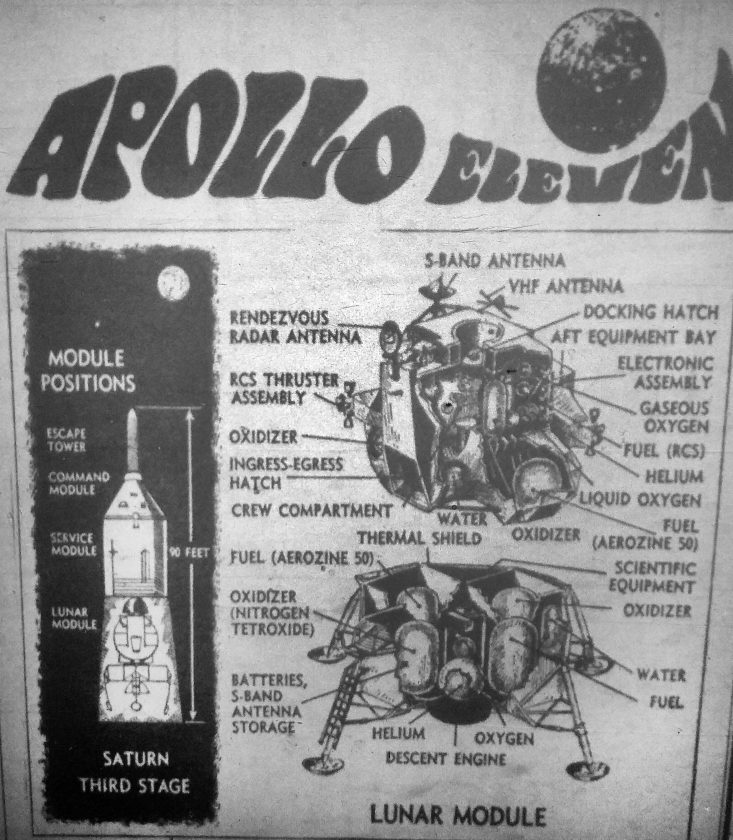 This graphic identifying various components of the Apollo 11 lunar module was one of several that the Nashua Telegraph ran in the days leading up to and during the moon landing 50 years ago.

Once upon a time, I wasn’t very good at sitting still long enough to fully absorb much of what I was watching, listening to or reading, much less retain whatever it was for more than a few hours.

And that was on the days with the fewest distractions.

Someone familiar with my “predilection to wander without taking a step” (I think that’s what one doctor diagnosed) may have predicted, “Jeez, you just don’t concentrate … I bet if someone flew to the moon and walked around you would be thinking about something else.”

Aha – that’s one time that “someone” would have been dead wrong.

Though I admit I have no physical evidence – and any witnesses are gone (both in the sense of “deceased” and “moved away long ago”) – I can say I stepped out of the norm that hot (not unlike today) but thrilling day some 50 years ago when I glued my eyes to the old Magnavox console TV and did indeed watch people land on the moon and walk around.

Many a newspaper column, TV segment and social media post have been devoted the past week or so to the 50th anniversary of the Apollo 11 moon landing, which to this baby boomer seems at once just the other day and a long time ago.

I bet I speak for many Americans of all generations when I recall the thrill, the near-disbelief blended with a wave of national pride, that wafted over my humble childhood abode and pushed everything else onto the back burner for not just hours, but several days.

Seriously? Three astronauts landed on the moon, and two of them actually set foot on what we’ve always been led to believe was a huge chunk of green cheese?

Undoubtedly there were some who worried that the spaceship – or more accurately, the lunar module, which was attached to the Columbia command module – hit the Man in the Moon in the eye when it landed.

Anyone who tuned in for the liftoff on “launch day,” Wednesday, July 16, was hooked. We hung on every newscasters’ and newspaper reporters’ words day and night, or at least until the TV stations went off the air for the night.

By Saturday it was pretty much all we talked about, whether it was with our parents or our friends or the nice old lady at the corner candy store.

I remember wondering if the astronauts would make it to the moon on schedule, what with 240,000 miles to cover. I bet plenty of folks wondered, privately at least, if they would make it at all.

With everyone’s attention on Apollo 11 and its anticipated touchdown in the Sea of Tranquility just a couple of days away, Americans welcomed a brief break from the usual news of the day – the Vietnam War, the tension of a widening generation gap, big-city racial strife and such.

Locally, breaking news didn’t break as loudly as it would have any other time. The New England-wide heat wave was quietly in the news, confirming my recollections of sitting before a 19-inch “breeze box” set to high – which passed, in my house, for central air-conditioning – as I squinted at the TV screen.

The fatal crash in Massachusetts involving then-Sen. Edward Kennedy was news, but bottom-of-page-one news. I also remember hearing the news of the big fire that destroyed a big chunk of Old Orchard Beach, a favorite playground for little sister and me, as it was for our parents, and their parents before them.

As we do when there’s big news nationally or globally, the Nashua Telegraph, our predecessor in name, found local links to the goings-on some 240,000 miles away.

And Nashua residents Harold Hallisey and Theresa Melbourne had connections – Hallisey as an aerospace engineer at NASA’s Marshall Space Flight Center in Alabama, where the Saturn V rocket was developed, and Melbourne as a secretary in support operations at the Kennedy Space Center in Florida.

In perusing the old Telegraphs, I found a couple of Associated Press stories whose lead paragraphs jumped out at me as examples of great writing; I’d be remiss not to share them.

The first is by AP writer Howard Benedict, which appeared the day after liftoff: “The good ship Columbia raced unerringly toward the clutch of lunal gravity today, carrying three brave men toward a Saturday rendezvous with the moon and destiny.”

And on the day the astronauts lifted off from the moon for the return trip to earth, AP’s Harry Rosenthal wrote:

“Brushing the moon dust from their clothes, the crew of Apollo 11 turned home to earth today, their scientific treasures intact, their place in history secure.

“They were together again: Neil A. Armstrong and Edwin E. Aldrin Jr., the first humans to tread and feel the soil of the moon; and Michael Collins, who girdled (encircled) that barren globe in the mother ship, awaiting their return.”

Some great writing, inspired by an even greater event.

Dean Shalhoup’s column appears Sundays in The Telegraph. He may be reached at 594-1256, dshalhoup@nashuatelegraph.com or@Telegraph_DeanS.