Governor’s veto leaves many in uncertainty 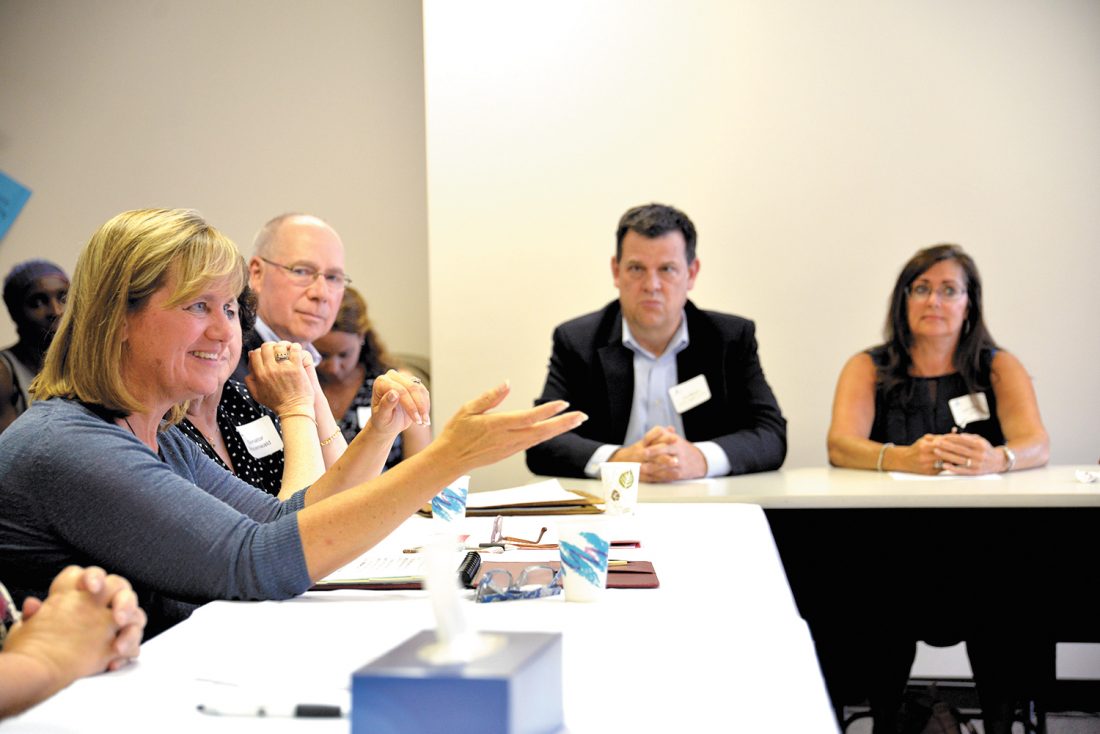 With their sights set on addressing how his veto will impact those in the developmental disabilities community, state Sens. Cindy Rosenwald, D-Nashua, and Shannon Chandley, D-Amherst, along with state Rep. Joelle Martin, D-Milford, joined other leaders and parents of children with disabilities at Gateways Community Services to hear from those already feeling the impacts of not having a new state budget.

Thornton is a member of the board of directors at Gateways. He said the 129 people looking for services are currently waiting to see what happens. He said the hiatus on the budget has also stopped any increase in reimbursement rates for Medicaid.

“We have not had a rate increase since 2006, and Medicaid has never been one to be generous with their payment system,” Thornton said.

Although majority Democratic legislators and Sununu disagree on some aspects of the budget, Rosenwald believes lawmakers should be in support of Medicaid reimbursement rates. She said that the House and Senate budget incorporated a bill she sponsored, SB 308, which increased these rates. She said the bill made significant and overdue investment in the health care workforce by increasing the reimbursement rates, and also incorporating the state loan repayment money for those paying tuition costs.

The funding eventually provided in the budget was about half of what was in that sponsored bill. So, instead of $110 million, the final number included was $60 million. She said that would have allowed for every Medicaid provider in New Hampshire to see a rate increase of 3.1% the first year, and an additional 3.1% the second year.

“Unfortunately, in his veto Gov. Sununu has suggested that we cut the rate increase in half,” Rosenwald said.

However, it was already cut in half from the original $110 million that was proposed. That would then mean Sununu is proposing that a quarter of that is spent. Rosenwald believes the budget sent to the Sununu was a balanced, fair, reasonable and sustainable budget.

However, some of her Republican colleagues would beg to differ, including Sen. Jeb Bradley, R-Wolfeboro, who said he supports the Governor’s veto.

“In terms of the families that have disabled children, or the DD community, I don’t think anybody has worked harder than Gov. Sununu to end the so called waitlist,” Bradley said. “There’s no one on the waitlist is my understanding, right now, and I think the sooner my Democratic friends realize that some adjustments need to be made to the budget, the sooner we’ll ensure that the waitlist Gov. Sununu eliminated in his first budget doesn’t come back.”

Nonetheless, as Thornton cites, there are still 129 people statewide facing uncertainty, waiting to see what the next move is in this budget process.

During Tuesday’s roundtable discussion with legislators at Gateways, a few families of people with disabilities shared their stories of how they are being affected in terms of the waitlist, workforce and also touching upon dental coverage, which Rosenwald said only 14% of dentists in New Hampshire take Medicaid. Nonetheless, one of the three parents who spoke about the waitlist, Lori Breen, has a son who is transitioning out of high school.

Her son, Jake, will be 21 this fall. During his high school career, he was very active and involved. He was part of the senior class play, engaged in sports every season all throughout high school and was also involved in clubs, as well. Breen said now that he is leaving high school, the family has worked very hard to get him into a program called Project SEARCH, which is an internship program that features supported employment. The goal is to help Jake gain job skills that will hopefully lead to a job in the community that will not require supports once he is done.

“If the funding isn’t in place, we lose his spot in Project SEARCH,” Breen said.

She said there are a very limited number of spots, and if her family has to reapply next year, Jake may not get in because the competition is that stiff. Additionally, if Jake is unable to get into the program, she wonders what he is going to do all day. If left to his own devices, he may play on an iPad or watch movies, but will then lose all of the skills he has worked so hard to cultivate. Additionally, she cannot afford to quit her job and stay home with her son. So, for now, she and many other families are caught in this waiting game until legislators and the governor can cut a deal.

The day prior to Sununu’s veto, lawmakers approved a continuing resolution to maintain current spending levels for three months starting on the first day of the new fiscal year, which was July 1.

Rosenwald said the increase in funding that was included in the new budget was $71 million of state general funds that would have been matched by that amount in federal funds.

“What was proposed was $140 million of additional funding for the developmental services program, and that was vetoed,” Rosenwald said.

Furthermore, Thornton said the individuals who provide services to clients in this community can often earn more working in fast food. As a result, some are leaving to earn more money doing less work. He said right now, the state has 346 vacancies system-wide.

“People cannot find individuals to work for the amount of money that the system allows,” Thornton said.

He said currently, 10 clients at Gateways are caught in this state of limbo, with six coming out of the school system and the other four transitioning in from other places.