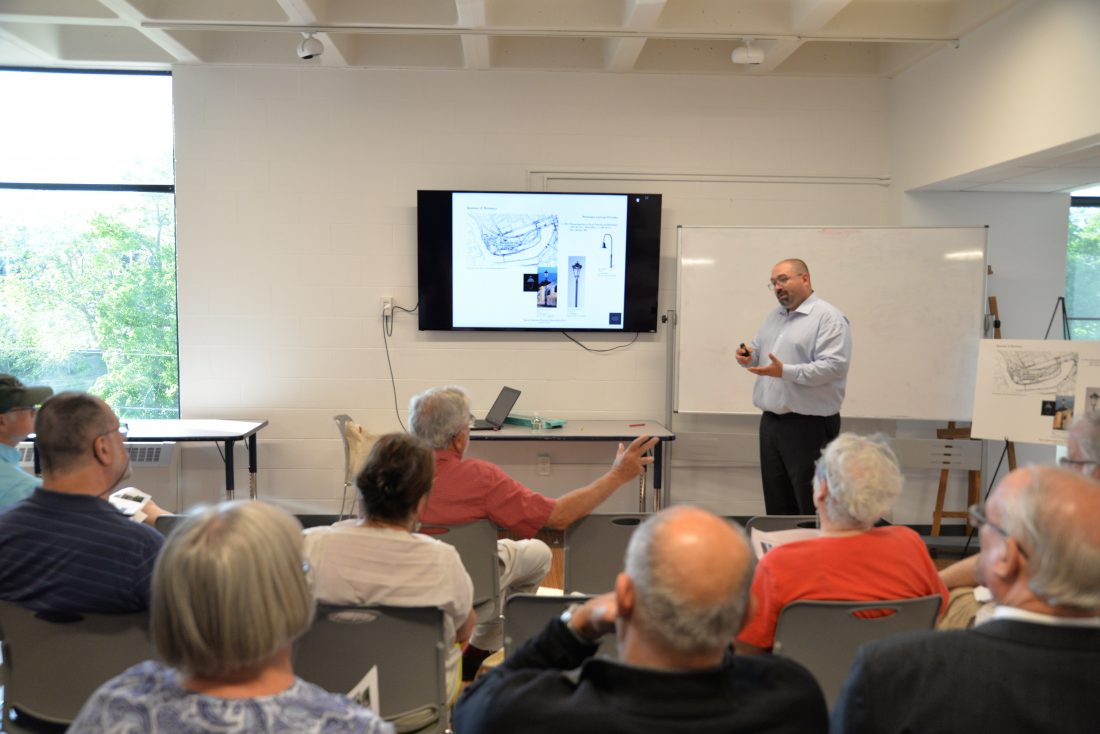 NASHUA – Lights on the underside of the Main Street Bridge could soon create a glimmer in the Nashua River, thanks to the city’s tax increment financing plan for the Downtown Riverfront lighting project.

Commonly known as TIF, tax increment financing is a system that allows governments to use the increase in a property’s value to pay for the improvements that create the increase. For example, if adding a new roof to a building will increase said building’s value by $250,000, TIF would allow the government to capture the $250,000 to pay for the new roof.

As for the project, the city contracted with Lowell-based Lumen Studios Inc. early this year to create a comprehensive plan for lighting the Riverwalk. Tuesday, Principal at Lumen Lukas Sturm attended a meeting at the Nashua Public Library to answer questions and provide attendees with a look at the preliminary ideas, as well as to listen to their input on design options.

“They are high enough so they’re less likely to be vandalized,” Sturm said.

Additionally, all of the lighting he discussed Tuesday is LED lighting. He said the components are black so they do not reflect light directly from the source. He said there are going to be 46 fixtures.

“The next component that we’re looking at is lighting the Cotton Mill transfer bridge,” Sturm said.

He said Lumen officials believe they can get lighting on either side of the vertical elements of the bridge and light up through it. The deck itself is elevated, and down below there are open areas where each of those vertical pieces enter.

Further down the Nashua River is the Main Street Bridge, and there is additional lighting plans for that area as well.

“For the Main Street Bridge, we’d like to incorporate some light into the handrail itself,” Sturm said.

By continuing with the lighting of vertical elements, the aim is to tie the two downtown bridges together. They also want lighting glowing from beneath the Main Street Bridge arches. Maintenance could be done of the lighting there on a yearly basis.

Moreover, with a number of sculptures around the area of this project, he said up to five in-ground lights per sculpture could be installed to really highlight each of those elements. Sturm said as sculptures get added, more light fixtures could easily be added in as well.

There are plans to illuminate the Horace Greeley House on the Lofts 34 side of the Nashua River, as well as lighting plans for fountains in the area.

Marchant said the idea is to guide one’s eye down the river to help encourage people to walk down the riverfront. However, Sturm said if an area is over-lit, it can actually create a sort of fish bowl for folks who may be walking around the area at night.

“The goal is to really sort of mellow into that landscape with the lighting, have significant amounts of light so it’s safe, and feels safe, but also the feeling of safety comes with being able to see your surroundings,” Sturm said.

He said the drivers that come with the LED boards now are all capable of being wirelessly integrated or hardwired together.

In terms of funding, Marchant said everywhere geographically located within the TIF district that Mayor Jim Donchess and the Board of Aldermen put in place about a year ago – can fund this project. However, as of right now, the TIF does not extend down in front of the large building at 60 Main St., the Nashua Public Library or library walk.

In other words, the piece that does not have funding is the south side of the Main Street Bridge to the rail road bridge on the library side.

“For now, that’s phase two for the lighting because we don’t have funding for that, but the TIF is available, and is intended to be used to carry out this project for the Jackson Mills (hydropower plant) all the way down to the Cotton transfer bridge, both sides of the river,” Marchant said.

Tuesday’s meeting on the design was preliminary, and a price tag is not yet attached to the project. Marchant said by August, when the final plan is complete, officials will have a cost estimate.