‘Get the Lead Out:’ Officials working to remove toxic metal from homes 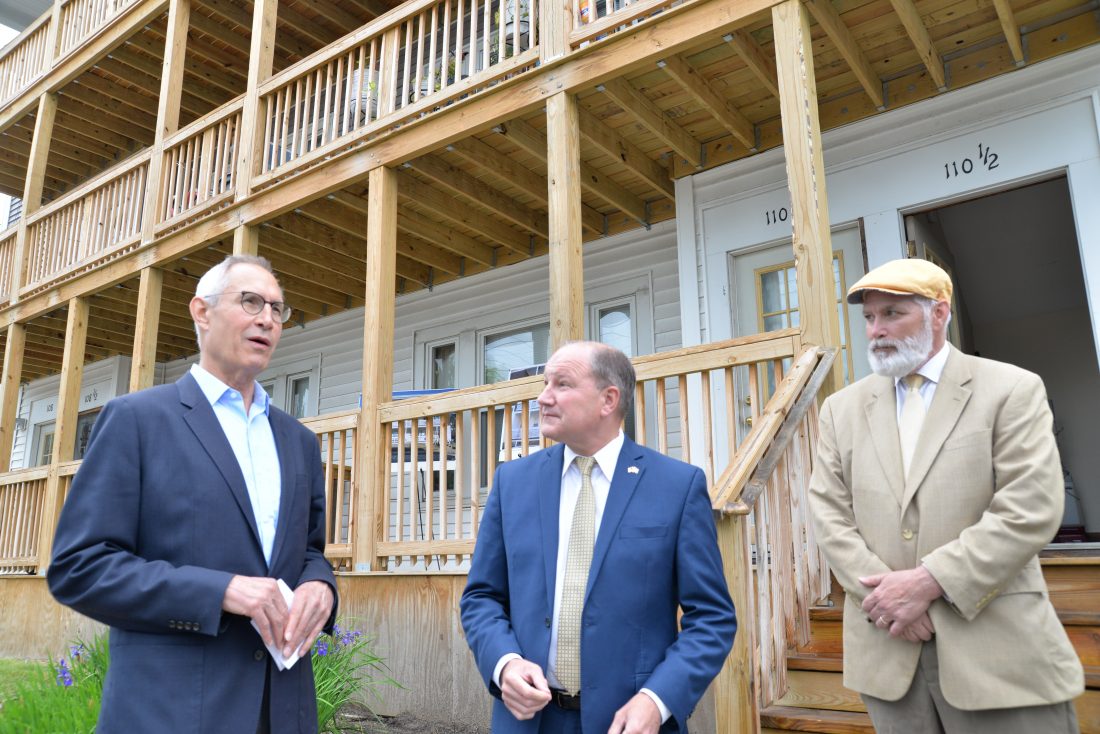 NASHUA – Any home built before 1978 likely contains some level of lead, a toxic heavy metal once commonly found in paint, gasoline and even cosmetics.

New England, in general, has some of the oldest housing stock in the country. Apartment buildings and homes in Nashua are no different, and with a $2.5 million Lead Based Paint Hazard Control grant and $400,000 in Healthy Homes Supplemental funding, the city aims to address lead hazards in 140 housing units.

Officials believe this will provide safer homes for low and very low-income families with children and healthy homes interventions in 126 eligible low-income units in the city. Tuesday, Nashua Mayor Jim Donchess and other city officials joined counterparts from the U.S. Department of Housing and Urban Development at a property that recently underwent lead remediation work. This is one of the six three-bedroom units at 108-110 Ash St.

“In New England, we have some of the oldest housing stock in the country, and lead is found in every paint that’s from 1978, and earlier on in housing,” HUD New England Regional Administrator David Tille said.

Some of the state’s housing options are much older than that, and Tille said the lead issue is the premier environmental health problem for children in New Hampshire. According to state statistics, the primary source of childhood lead poisoning in the state is from exposure to lead paint and dust in homes built prior to 1978.

“It is a serious issue in our region,” Tille said.

Donchess said on a state level, New Hampshire has done a few things that the city appreciates, including becoming a universal testing state for all 1 and 2-year-olds. He said it is very important because without universal testing, officials can’t tell what child has been suffering from lead poisoning.

June is recognized as Healthy Homes Month, and this year’s theme is “Growing Up Safe and Healthy – Five Minutes to a Healthy Home.” The theme focuses on the opportunity to protect current and future generations of children from paint, dust and soil that contain lead.

Tille said lead does not just impact physical health of children, but also their developmental process. He said a correlation with issues such as child development, test scoring, behavioral issues, and problems later on in life with crime and employment has been observed. Overall, he said the societal cost of this issue is huge.

“As we move forward testing more children, we hope to get a more realistic picture of the number of children that have been exposed to lead paint,” Nashua Urban Programs Manager Carrie Schena said.

She said this mandatory testing should be phased in within the next six months or so, and that the city partners closely with the city’s Division of Public Health and Community Services, which is tasked with doing all the blood lead testing.

Furthermore, this sort of remediation work can be quite costly. Homeowner Robert Crowley said for the roughly two months of work, it cost about $96,000 to correct the lead issue.

“Without the program, we probably couldn’t do any of the lead work,” Crowley said.

He acquired the property a short time before enrolling it in the Nashua Lead Paint & Healthy Homes Program. Crowley said the lead was found mostly on the porches and exterior portion of the apartment building. He said the paint was peeling heavily, leaving lead flakes throughout. As a private owner, he said it is unrealistic for many to have the funds available to address an issue like this. His property is far from the only one affected in Nashua.

“There are still more units,” Donchess said. “We think it might be 2,000 where there’s some lead risk in the city.”

In 2017 HUD awarded $36.9 million to New Hampshire, a significant portion of which went to Nashua to be used on these sorts of projects within three years. Since the program’s inception, this funding has helped 2,399 units statewide, with 626 of those in Nashua.

“Anybody who’s concerned about lead, and they’ve got a young child in the house, the first call I would say is to the city of Nashua’s lead program,” HUD Region 1 Healthy Homes Representative Martin Nee said.